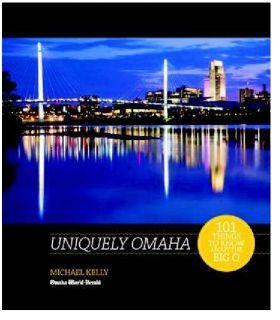 With the metropolitan area bearing down on the 1 million-population milestone, and having received numerous high "livability" rankings, World-Herald editors asked if I'd like to write a book about Omaha.

My reply was easy: Yes! We hope you like the result:

"Uniquely Omaha: 101 Things to Know About the Big O," to be published next month but available for order now.

Don't worry: It's not a tome that you have to slog through. Beautifully illustrated with more than 400 photographs, the 168-page, hard-cover book primarily celebrates today's Omaha — with just enough history to say how we got here.

In bite-sized chunks, not unlike the Saturday notebook columns I've long written, "Uniquely Omaha" covers lots of ground. If you mix all the stories, snippets, factoids, whimsy and photos together, the concoction describes one and only one place: Omaha.

No, Omaha isn't the only place with friendly people, global businesses, a lively arts and entertainment culture, an engaged philanthropic community, a world-class zoo, internationally known medical centers, an excellent symphony and an opera company and national sporting events like the U.S. Olympic Swim Trials and College World Series. But our town possesses all of those and much more.

It's a place where Ebola patients were sent during an international health crisis, causing a national commentator to ask, "How do we replicate Omaha?"

You could call us a big smallcity or a small big-city, but the Big O is small enough and yet big enough for just about anything. It doesn't act too big for its britches. It could go by a motto that it's nice to be important, but it's more important to be nice.

Famous Omahan Warren Buffett embodies what a national celebrity called the "Omaha way," a combination of modesty and confidence that you can do just about anything here that you can do anywhere else.

A movie star called Omaha "sexy," and a star quarterback kept shouting "Omaha!" at the line of scrimmage. Named for an Indian tribe, our city has lent its name to a champion thoroughbred, a color, a poker game and a historic World War II landing site.

Based on many criteria, Fit Pregnancy magazine called Omaha "very fertile" and the fifth-best place to have a baby, and a Philadelphia artist painted one of the world's largest outdoor murals in Omaha, "Fertile Ground." That is, fertile with opportunity.

Omaha suffered a blow when ConAgra announced this month that it will move its headquarters to Chicago, though about 1,200 jobs will remain here. Meanwhile, a Chicago newspaper earlier this year, commenting on a survey that named an alpine country the best place to be born, wryly editorialized that "Switzerland is the Omaha of the world."

That was a nod to Omaha sitting at or near the top of many livability surveys. Thanks for noticing, Chicago.

A ConAgra friend told me last week that the company sometimes does have difficulty recruiting people to Omaha. I hope lots of companies will use our book to help show the vibrancy of all that goes on here.

Nationally known writer and public-radio host Kurt Andersen, an Omaha native, wrote in the New York Times that he once had given up on his hometown. But the tide turned, he said, and Omaha has undergone a "cultural awakening."

Especially in the last couple of decades, Omaha has made great strides. The CenturyLink Center convention center and arena, TD Ameritrade Park, the Film Streams art-movie house, the Slowdown music venue, the Kaneko "open space for the mind" and the Holland Performing Arts Center are just a few of the new.

And the old, in many cases, are renewed. The acclaimed Henry Doorly Zoo & Aquarium keeps growing, now with the African Grasslands. In donating money in 1963, Doorly's widow called the Omaha zoo pathetic — but now look.

The Dallas Morning News wrote recently about Omaha's "hip makeover" and praised the sleek, modern Holland Center. Thomas Wilkins, conductor of the Omaha Symphony, told me he loves welcoming musicians and colleagues from around the country to the Holland.

"They walk on that stage for the first time, look around and go, 'Holy Smokes!'" the maestro said. "I just give a nice, proud smile and say, 'Yeah, I know.'"

Our book keeps a sense of humor in telling of our, let's say, changeable weather and other topics. No one says we are perfect. We even include a section in which outsiders toss brickbats.

Some tease Omaha as "a sleepy, yawner city," as if we are bumpkins. And yet we never turn into pumpkins, not even at midnight. We're authentic, and we face the future with eyes wide open.

Omaha still has four Fortune 500 headquarters, a lot for a city our size, as well as five more corporations on the Fortune 1,000 list. C.L. Werner started out as one man and a truck, building one of the nation's five largest trucking companies.

All this is just a sample. We numbered 101 main topics, but most of those include subtopics, so the book actually contains hundreds of separate items.

An Omahan whose father sold early TVs also went into television — and has won numerous Emmys as executive producer of game shows.

Most of us know the impact of Offutt Air Force Base and the old Strategic Air Command, as well as today's U.S. Strategic Command headquarters. But do you know about the Omaha native who heroically took flak as he jetted 350 feet over Cuba, making photos that proved the existence of Soviet ballistic weapons during the 1962 Cuban missile crisis?

"Uniquely Omaha" is all about Omaha, meaning the metro area that stands astride the nation's longest river, intersected by the second-longest highway. That includes fast-growing Sarpy County suburban towns as well as Council Bluffs and the Iowa town of Carter Lake, which curiously sits on the Nebraska side of the Missouri River.

We write about our ethnicities, our eccentricities and our diversity. "Fontenelle" is a name heard all over town, in a forest, a boulevard, a neighborhood, a former hotel and elsewhere. Do you know where it comes from?

We're the home of Omaha Steaks, Mutual of Omaha and the Oracle of Omaha. The "Omaha sound" of music appealing to the young made waves, and artistry remains important to all of our age groups. A live-theater community is led by the Omaha Community Playhouse, the nation's largest community theater.

Omaha also is a mixture of faith communities — including a tri-faith campus that intends to include a synagogue, already open, with plans for a Christian church and a mosque.

Oh, and all those high national rankings: We didn't make them up. Best city to be a tech worker, best for an active lifestyle, best to raise a family and many other high rankings on low cost of living, low unemployment rate, lack of traffic congestion and others.

I came to Omaha at 21 to work at The World-Herald and have stayed 45 years. I'm honored to have collaborated on "Uniquely Omaha" with editor Dan Sullivan, designer Christine ZueckWatkins and other colleagues.

This is a book I hope Omahans not only will enjoy but also will want to send to friends and relatives around the country, who might — like potential business recruits — have misconceptions.

For our talents and our skills, for our foibles and our falls, we Omahans are who we are — in some ways similar to other places but in our collective way distinctive. No pretense, no phoniness.

We are Uniquely Omaha.

Health care workers across Nebraska are struggling under the recent surge in COVID-19 cases and the hospitalizations and deaths that have followed.