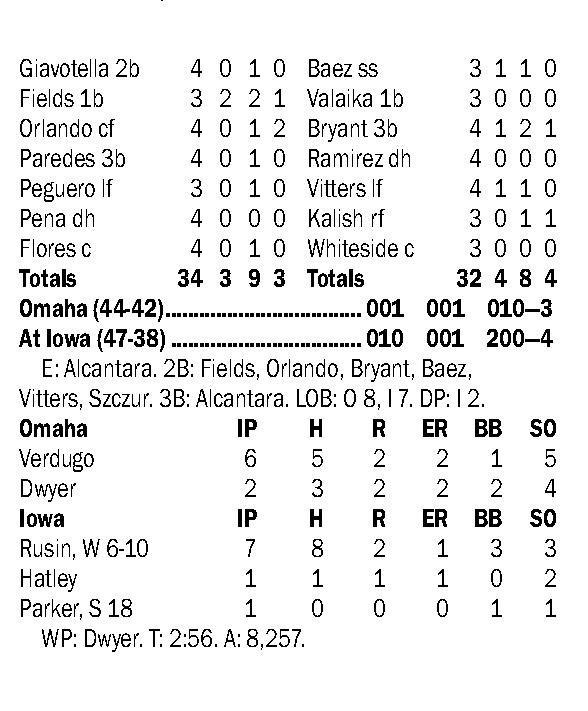 The Storm Chasers lost their fifth straight to slip to 44-42 and 3% games behind the Cubs in the American Conference Northern Division. Iowa has won 16 of the last 18 contests between the teams at home since the 2012 season.

Josh Vitters opened the decisive frame with a double and moved to third base on a Ryan Kalish groundout. Alcantara then came through with the go-ahead triple, his league-leading 11th three-base hit, and scored when Szczur followed with a double off the wall in center field to give the Cubs a 4-2 lead.

Matt Fields drew the Chasers within one when he hit a home run on reliever Marcus Hatley's first pitch.

Hatley recovered, however, retiring the next three hitters to end the inning.

Blake Parker worked the ninth to earn his 18th save in 19 opportunities and sew up the hosts' fifth consecutive victory.

A two-out single by Kalish scored Kris Bryant for the game's first run in the second inning and marked the first time on the road trip that Omaha had not scored first.

The Storm Chasers scored their first run in the third inning on an Alcantara error on what could have been an inning-ending double play. Brian Bocock scored on the bases-loaded groundout by Paulo Orlando.

Iowa starter Chris Rusin lasted seven innings and was charged with two runs, one earned, on eight hits, while walking three and striking out three to earn the win. The southpaw is 5-0 with a 1.96 ERA in seven career starts against the visitors.

Omaha starter Ryan Verdugo yielded two runs on five hits over six innings, while walking only one and striking out five.