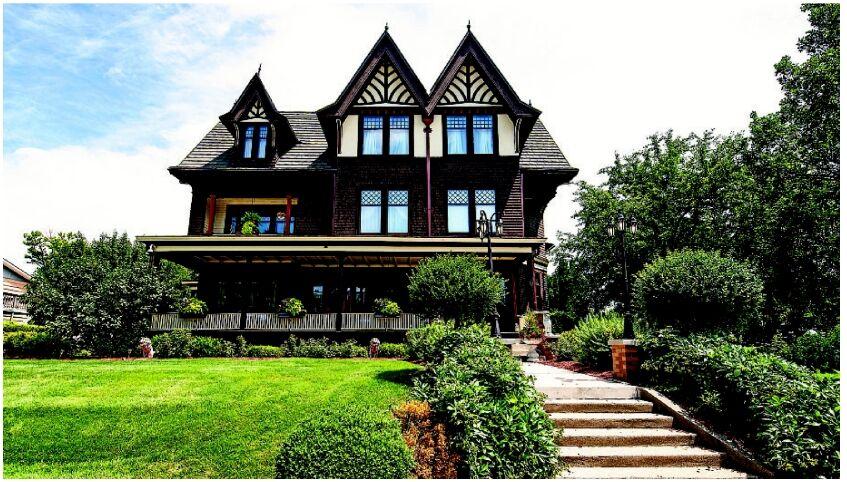 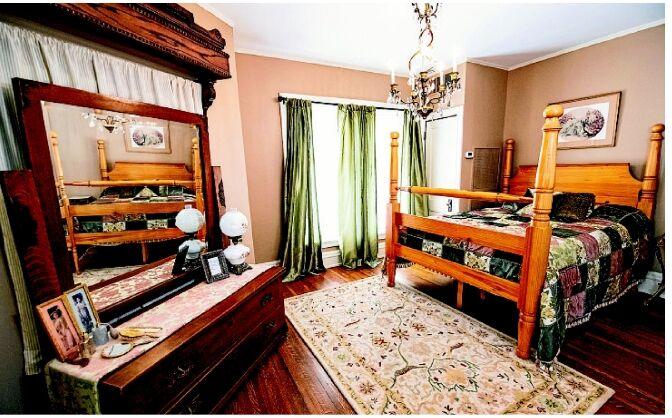 The Jelly Bean room is one of the rentable rooms at Chocolate Mansion, each of which is named after candy. The mansion, at top, was built in 1894 and is set to open as a boutique hotel this week in Sioux City, Iowa.

SIOUX CITY, Iowa (AP) — It's only fitting that the bedrooms in the Chocolate Mansion, a dark brown Shavian Queen Anne house that is soon to open as a boutique hotel, are named after candy.

There's the second-floor Twin Bing Suite, which is accented with the shade of red found on the wrapper of the Palmer Candy Company's famous chocolate bar; the Jelly Bean Room, which features hints of pastel pink and green; and the thirdfloor Black Jack Room with Far East-inspired décor, among others.

In recent years, the three-story mansion at 2900 Jackson St. was often referred to as the Palmer Mansion or the Chocolate House. In fact, Edward C. Palmer — of Palmer Candy Co. fame — and his wife, Dorothy, lived there at one time.

"We just kind of decided that because that's such a big piece of Sioux City history and that's what it's known by, why not do that?" manager Brittany Lesline said of the candy-theming in the mansion, which is listed on the National Register of Historic Places.

The Chocolate Mansion has a library, a formal dining room, a breakfast room, as well as a master bedroom wing. The wing, now the Twin Bing Suite, has its own sitting room and a Jack and Jill bathroom equipped with a clawfoot tub and a large walk-in shower.

In spite of the COVID-19 pandemic, Lesline said the demand to tour the Chocolate Mansion, stay in one of its guest rooms and host a wedding ceremony in its backyard garden has been strong.

"It's been crazy. People are already trying to book individual rooms," she told the Sioux City Journal.

The Chocolate Mansion was designed by architect William D. McClaughlin and built for just $12,000 in 1894 for Charles Mylius, the secretary and treasurer of the Curtis Sash & Door Co. in Sioux City, but Mylius never lived there. The first residents, in 1899, were Franz and Matilda Shenkberg.

"The architecture is almost, I want to say, sweet itself," Lesline said. "(McClaughlin) used very unique designs, especially for his era."

According to Lesline, John and Deb Wokenfuss purchased the mansion in 2004 and completed a bunch of renovations on the property, including the carriage house, which was lifted off its old foundation.

The carriage house contains the original horse stalls and troughs that Clydesdales once used, and, Lesline said, the hayloft door still opens.

A flight of stairs in the carriage house leads to the updated Hershey's Kisses Suite, which can sleep three people. It has its own fireplace, kitchen, bathroom and private bedroom. Lesline said a stove will be added to the kitchen next year.

"The cool thing is, this was originally some sort of apartment for the groundskeeper," she said.

When the Wokenfusses decided they were ready to downsize, Lesline said her father, Kelly Conolly, suggested that she manage the mansion as a boutique hotel. Lesline and Conolly opened Linda Sue Manor, their former family home, as a boutique hotel in 2017.

"There's no way to sell them for what they are probably worth right now," Lesline said of Victorian homes. "Why not turn it into something like this?"

Since the mansion was already furnished and ornately decorated by Deb Wokenfuss, Lesline said the only major project to tackle was a bathroom renovation. "That's really the only huge difference, because this has all been refurnished and redone to suit families," Lesline said, while standing in the home's foyer near a grandfather clock.

To the left of the foyer is the front parlor, which Lesline said is one of her favorite rooms. The dusty rose-colored space was inspired by a lamp that was purchased sometime in the late 1800s or early 1900s by the family of Deb Wokenfuss.

"She fit this room and the color scheme around that," Lesline said. "I love this room. I love all the colors in here - the golds, the dark reds." The Victorian era color palette is carried throughout the home. Green wallpaper with floral patterns cover the walls of the formal dining room, where china is displayed in antique hutches and still-life paintings of fruit rest on wood trim.

"It'll be perfect for a tea party or a book club," Lesline said.

Guests can stay in one of seven bedrooms, including the carriage house, or rent the entire mansion, which has an outdoor swimming pool and a more modern-looking basement with a bar and pool table. In addition to the garden, events can also be hosted in the third-floor ballroom.

The ballroom's wood floors gleam under light cast by chandeliers hanging from the ceiling in the dusty rose space. Lesline said the room was once painted black and used as a belly dancing studio. After the Wokenfusses moved in, they restored the ballroom's historical character.

"We can hold up to 60 people in this room," Lesline said as she walked toward an adjoining sewing room, which she said is an ideal place for caterers to set up.

A window in the sewing room looks out at the backyard pool, potting cottage and surrounding flower gardens. Lesline envisions brides walking through the potting cottage to meet their grooms at a pergola.

A CAREER BUILT ON TEACHING BY DOING

On a snowy January day, a 66-yearold professor in a blue Kansas golf shirt (tucked into black wind pants) walks into a UNK classroom and write…

The Jelly Bean room is one of the rentable rooms at Chocolate Mansion, each of which is named after candy. The mansion, at top, was built in 1894 and is set to open as a boutique hotel this week in Sioux City, Iowa.