Jarrod Dyson The outfielder's 2016 debut included two runs and an RBI before leaving in the third inning. 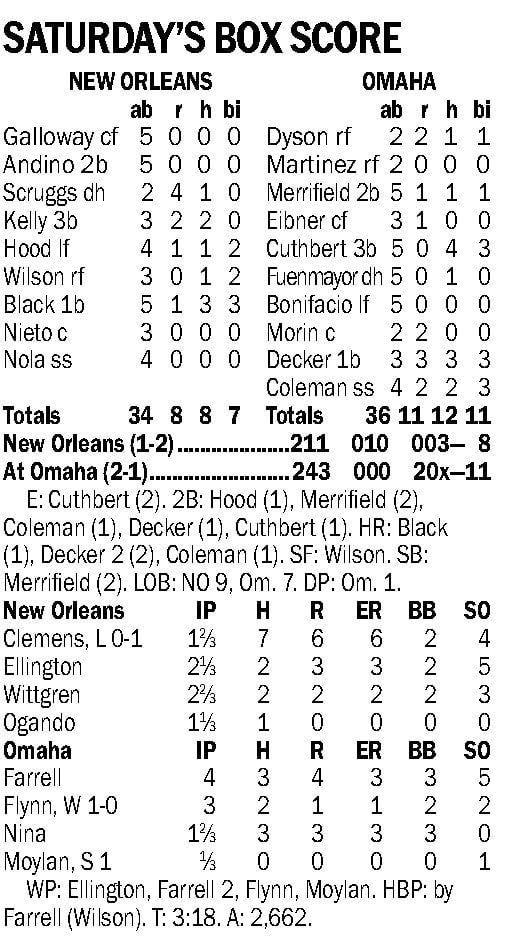 Jarrod Dyson, the man who coined the phrase, "That's what speed do," knows only one way to play.

The speedy outfielder was on track to be Kansas City's starting right fielder before he strained an oblique in his first spring training game. He opened his 11th professional season on the disabled list.

Dyson made his 2016 debut Saturday at Werner Park, batting leadoff and playing right field on the first day of his rehabilitation assignment with the Storm Chasers. He walked, singled and scored twice in three plate appearances before leaving after the third inning of Omaha's 11-8 win over New Orleans.

"It's been a journey for me, and I appreciate everything the Royals ever did for me," Dyson said. "They gave me the opportunity to make something of myself, and I'm just trying to take advantage of it.

"I've been trying to get this shot for a long time. I go out there and bust my behind every time I'm on the field. I try to be productive while I'm out there. It's kind of hard being productive coming off the bench and playing in the role I'm playing in, but I try to make the most of it and take the positive side of it."

Dyson's short outing Saturday was planned. He'll ease his way into playing nine innings. It took him almost two weeks after the injury to resume physical activity, which also took a toll on him mentally.

"It's been a little frustrating," he said. "But you've got to take the positive side of it and try to get back healthy. That's what I've been doing lately, just trying to stay positive. It messes with your brain a little bit when you're given the opportunity at a starting job and get hurt the first game of the spring.

"It was kind of a setback for me. ... I feel pretty good right now. I feel like I'm able to play, and I'm ready to play, but at the same time, I've got to be smart about this injury and listen to my body."

Dyson looked his usual self Saturday. After walking to open the Omaha first, he was running on a 1-2 pitch that Whit Merrifield smoked into the right-center gap. Dyson scored on a head-first slide at home.

He added an RBI single up the middle during a four-run second that featured a monster home run by newcomer Cody Decker. In his first Omaha start, the PCL veteran slugged a Paul Clemens offering into the signage on the roof of the home clubhouse beyond the left-field seating area.

It may have been the longest homer hit to left in Omaha's six seasons at Werner.

Decker rounded the bases, then shrugged as he was greeted by on-deck hitter Dusty Coleman. He later hit a ground-rule double to center and one hopped the bar beyond the left-field berm with a two-run blast.

Coleman added a three-run shot in the third as the Chasers built a 9-4 lead. Chesler Cuthbert had four hits for Omaha and drove in three runs. He has seven RBIs in three games.

Jarrod Dyson The outfielder's 2016 debut included two runs and an RBI before leaving in the third inning.