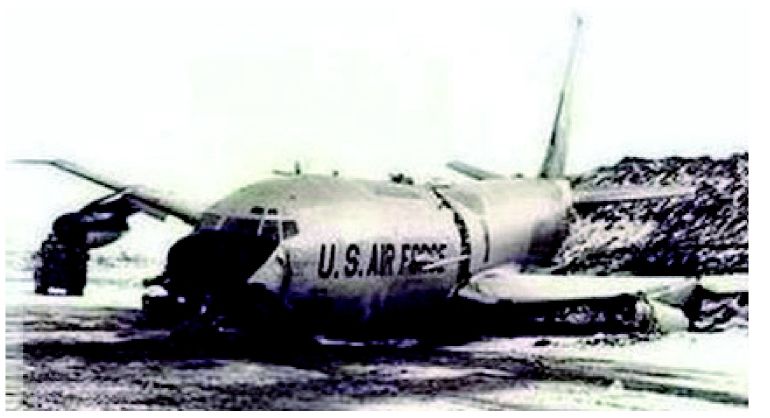 What was left of the Air Force jet that John Achor was piloting five decades ago when it slid off the runway in Alaska.

Almost 50 years after the fateful flight, John Achor can still feel the four-engine jet slipping and sliding down the slushy runway that Alaskan winter night. The rudder pedals moved freely beneath his feet. The nose wheel slid, uncontrolled and uncontrollable.

"About midfield, I realized something wasn't right," said Achor, now 84 and living in Elkhorn. "We hydroplaned all the way down the runway."

There was no playbook for stopping an out-of-control RC-135S "Rivet Ball" reconnaissance plane on an icy airstrip in the windswept Aleutians. So Maj. Achor, the commander of the Rivet Ball, made one up. His life, and the lives of 17 other crew members, depended on it.

He quickly cut power to the two inboard engines. That slowed the plane some, but not enough to keep it from running off the 10,000-foot runway at Shemya Air Force Base. Achor knew utility poles stood at the end. He would be dead if he hit them.

He employed a trick an instructor pilot once taught him, to steer the plane by adjusting the small flaps on the tips of the wings, called ailerons. Even with useless rudder pedals and brakes, he maneuvered the plane so it ran off the right side of the runway, dodging the poles.

The fuselage broke in front of the wings as it slid down a hill, but the jet remained mostly intact. The crew escaped with only cuts and bruises.

"It was fast thinking, out of the box. He did it at the right time, in a split second," said Robert Hopkins III, a former RC-135 pilot and historian of the Air Force reconnaissance mission. "Had it hit the poles, it would have exploded. They would have lost the crew, plane and all the sensors on board."

Achor grew up in Indianapolis, graduating from high school during the Korean War. He signed up for ROTC in high school and college, reasoning it would be better to go into combat as an officer than an enlisted man. He thought from the beginning he would make the Air Force a career.

"I had a degree in accounting, which didn't excite me a whole lot," Achor said. "The military and travel seemed a lot more exciting."

That was especially true after he applied for, and earned, a slot in pilot training. At the time the Air Force was flush with fighter pilots, so he was assigned to piston-engine KC-97 tankers. In the late 1950s, he moved to the jet powered KC-135 tanker, which is still in use today.

"I got to be pretty good at what I did," Achor said.

He flew combat missions out of Okinawa and Thailand during during the early days of the Vietnam War as part of a program called "Young Tiger." They were sometimes responsible for refueling dozens of fighter aircraft all at once, including many that were nearly out of fuel. It was a daunting assignment, and critical if the aerial campaigns were to succeed.

The tankers were supposed to remain in friendly skies. But Achor remembers one sortie that required him to venture over Laos, a neighbor to Vietnam that was in the midst of its own civil war. It was normally forbidden for tankers.

This time, though, a U.S. fighter was not only low on fuel, it was also damaged by anti-aircraft fire. Achor flew 100 miles into Laotian territory to refuel the plane.

"They could have launched a fighter and probably caught us," Achor said. But luck was with him: He and the American fighter jet both returned home safely.

After Vietnam, Achor moved over into the Strategic Air Command's then-new RC135 reconnaissance aircraft, which used the same airframe as the tanker. More than 50 years later, they still form the backbone of the Air Force reconnaissance mission.

At the time, many of the recon jets were based at Eielson Air Force Base, Alaska, near Fairbanks. That's how Achor ended up in command of the Rivet Ball Jan. 13, 1969, on a missile-monitoring mission from its deployed location at Shemya.

An accident board blamed ground crew for misreporting to the Rivet Ball crew the poor condition of the runway.

Achor moved on to an assignment in South Korea and later served at SAC headquarters at Offutt. He retired from the Air Force in 1976, to a career in real estate. Two years ago, he and his wife, Patricia, moved to Elkhorn from Arkansas to be nearer their daughter.

These days, he keeps busy writing mystery thrillers featuring a female protagonist, Casey Fremont, an Air Force pilot-turned-detective. He started with a small publisher in Arkansas but now sells through his own website, JohnAchor.com, and on Amazon.com. The titles — "One Two, Kill a Few," "Three Four, Kill Some More," "Five Six, Deadly Mix" — leave plenty of room to continue the series.

"I thought I'd become the next John Grisham," he joked.

As yet, Achor hasn't drawn on the pivotal moment of his Air Force career in his fiction — the winter night the Rivet Ball careered down the runway into the snow at Shemya.

But that moment still tugs at his memory. "To this day, the bug jumps up and I ask myself: Is there anything more I could have done?" Achor said. "Almost 50 years later, it's still there. It's still with me."

What was left of the Air Force jet that John Achor was piloting five decades ago when it slid off the runway in Alaska.