Audrey Faber After averaging 15.9 points through Creighton's first 18 games, she is averaging just 6.6 over the past five games. 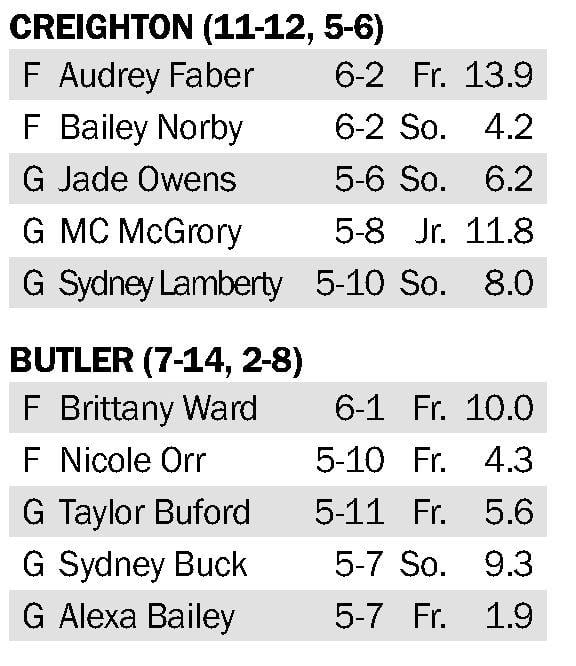 In order for the Creighton women's basketball team to have a shot at finishing the season strong, Audrey Faber knows she must starting hitting some of hers.

The talented freshman forward's frustration level has been on the rise since the shots she was making with regularity from inside and outside the arc quit dropping five games ago.

"One big emphasis this weekend is to move on and forget about what's been happening," Faber said. "It doesn't do any good to think about what happened the game before."

At the same time, it's always difficult for a shooter to purge such memories. Faber's individual struggles are compounded by the rough patch the Bluejays have hit as they head to the stretch run of Big East play.

Creighton has lost three of four, scoring 53 points in the game it won and 44 in its most recent loss. Finding a way to get the offense cranked up again would benefit the Bluejays as they face road games at Butler on Friday and Xavier on Sunday.

Faber has to figure prominently in that plan. She leads the Bluejays in scoring with 13.9 points, down two points a game since her shots quit dropping.

After her first 18 games, the 6-foot-2 forward from Des Moines led the nation in 3-point shooting percentage at .506. She was making 49.0 percent of all her field goals, had scored 10 or more points in 15 games and had logged six games of 20 points or more.

"I've had stretches like this, but they haven't been this exaggerated," said Faber, a top-100 recruit out of West Des Moines Dowling High School. "I've never been through a stretch where I've shot the percentage I'm shooting now.

"It's been difficult because I was performing at a high level and it's all kind of dropped on me. That's why I'm frustrated."

There is a fine line, Creighton coach Jim Flanery said, to trying to snap Faber out of her funk. He acknowledges that some of her difficulty might be tied to hitting "the wall," that real or imagined barrier that freshmen encounter.

The longer, more rigorous collegiate season sometimes can become a grind to the point it starts impacting performance.

"She's going through what some freshmen go through," Flanery said. "We just have to try to keep building up her confidence, but we can't force things."

Flanery pegged Faber as an important part of the what the Bluejays could accomplish this season when she joined the program last June. Still, Faber's role changed dramatically when the team's most dynamic offensive player, Marissa Janning, suffered a season-ending broken leg in late November.

"After Marissa got hurt, we did a lot of things to try some offense around Audrey," Flanery said. "With her struggling now, the worst option is to try to throw more at her, put more pressure on her to score.

"We have enough other good players, enough options. We might have to get some of our other players to not necessarily look to her to the degree that we were looking to her in December and early January."

Teammates have helped relieve some of the pressure by stepping up on the court with their play and with timely advice off it, Faber said. Coaches have been supportive.

Although she doesn't think she's lacking confidence, Faber said she's realized that she passed up a shot or two that she might have let fly early in the season.

"The coaches are showing confidence in me," Faber said. "I need to take shots instead of questioning it. If I'm not questioning it, I think there's a greater percentage of it going in."

Faber laughed when asked how much a hot night from the field might help at this point.

"One of those games would be nice because I haven't been performing," she said, "but as long as I keep doing the other things my team needs, I'm all right with that, too."

Audrey Faber After averaging 15.9 points through Creighton's first 18 games, she is averaging just 6.6 over the past five games.