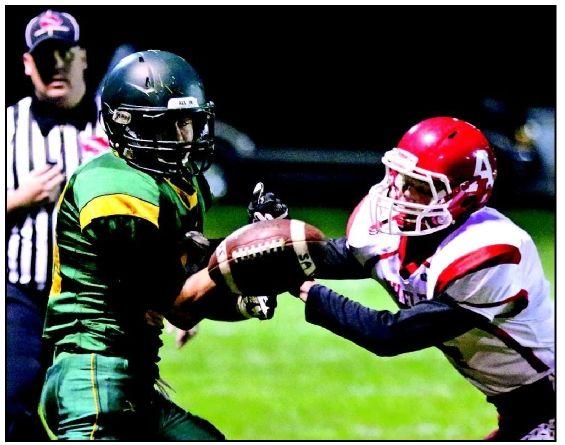 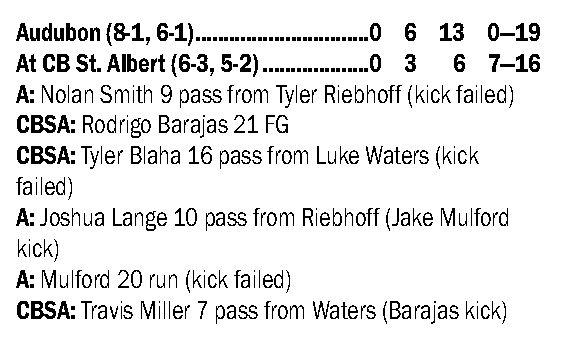 COUNCIL BLUFFS — Kevin Culjat was mindful of it all week.

He knew he had to find a way to slow Audubon running back Jake Mulford if his Council Bluffs St. Albert team wanted to earn the No. 2 seed out of District 1 of Class A. Mulford entered the contest with 1,280 rushing yards thorough eight games.

Through two quarters, Culjat's team was doing what it needed to do. Mulford went into halftime with 23 yards on nine carries.

The second half, however, was a different story.

Mulford rushed for 191 of his 214 yards in the second half. His only score of the night proved to be the game-winner when he broke free for a 20-yard touchdown run that gave the No. 6 Wheelers a 10-point advantage.

That insurance was needed, too. St. Albert scored a touchdown with 3:02 remaining in the fourth quarter when Luke Waters found Travis Miller for a 7-yard touchdown pass to cut the Falcons' deficit to 19-16.

Audubon got the ball back and was trying to drain clock, but a Mulford fumble with 1:28 left in the game with the Wheelers clinging to a three-point lead returned the ball to the Falcons. St. Albert drove all the way down to the Audubon 34-yard line before Waters was intercepted by Audubon's Ryver Kneuven to clinch the 19-16 victory for the Wheelers (8-1, 6-1 District 1).

Audubon locked up the No. 2 seed and will host its opening-round playoff game Wednesday night. St. Albert (6-3, 5-2) earned the 3 seed and will play a road game. Opening-round matchups weren't available at press time.

Culjat knew that Audubon would try to find different sets to get Mulford the ball in the second half, and they found plenty of success.

"Their coaches did a great job," Culjat said. "We told our kids that they would keep running different formations and running different things, and they found that power in the second half. They were kicking out our end, and we just didn't do a good job of adjusting to it. He's a very special player."

"Our game plan every week is smash-mouth football, especially if we can spread out the defense and have six or seven guys in the box," Mulford said. "We need to be able to run against that.

"It's not just me. The goal is just to get down field. We're good at going and getting yards after contact."

Nebraskans are known for being big-hearted, sensible and hardworking. We step up when neighbors need us. We make decisions and act based on fa…