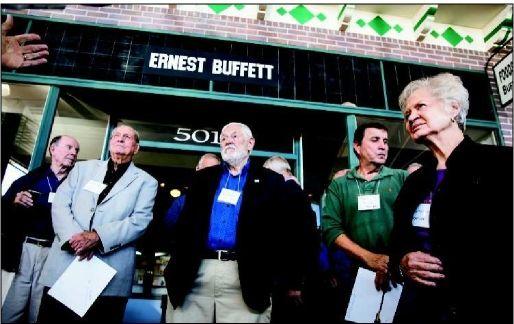 Bill Buffett, center, son of the owner of the long-closed Buffett Grocery, and former worker Myrtle Koneck join other ex-workers at a reunion at the replica store in the Durham Museum on Thursday. 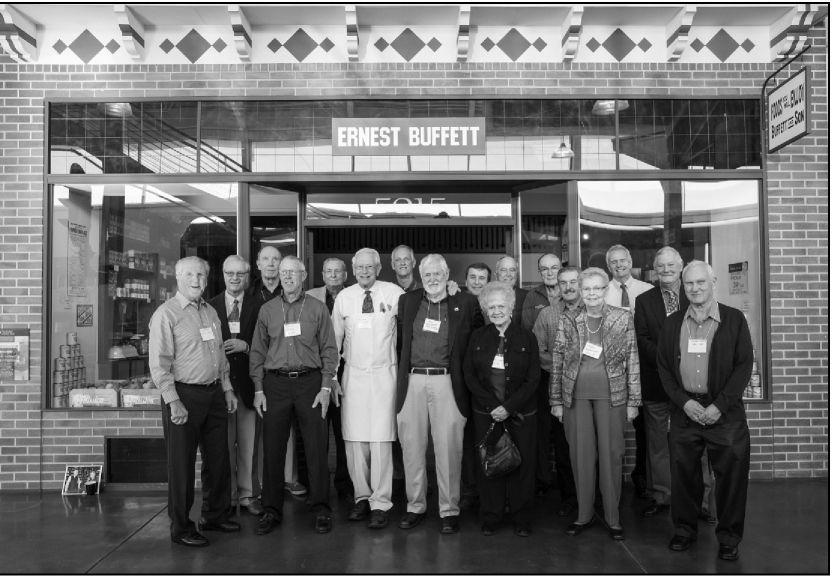 Bill Buffett, center, and former Buffett Grocery workers get a reminder of how the old business looked during a reunion at the replica store in the Durham Museum on Thursday.

Stories of a bygone era were right at home at the Durham Museum during a reunion Thursday of about 20 of the "youngsters" who filled orders, delivered groceries and did odd jobs at Omaha's long-closed Buffett Grocery.

During the 54 years that Warren Buffett's grandfather, Ernest, and Uncle Fred ran the store at 5015 Underwood Ave., they hired a steady stream of neighborhood teenagers, including young Warren and Charlie Munger, who later became partners in the Omaha conglomerate Berkshire Hathaway Inc.

Warren and Charlie didn't attend the Durham event, but there was Myrtle Koneck, who was 16 when she started at the store in 1942. Dashing between the basement, the main floor and upstairs, she lost 10 pounds in her first week.

The retail experience helped her get a job in the millinery department of the downtown Kilpatrick's department store, where she sold 19 hats on her first day.

There was Jerry Gordon, 24 years later, who remembers hauling boxes of groceries, two at a time, up an outdoor stairway to a third-floor apartment in the winter. But he loved sorting produce in the basement. "We could eat all the apples and peaches we wanted," he said.

And there was John Lenhoff, who couldn't stomach the task of cleaning out a bin of rotten vegetables. He went home, returning after lunch to find that Fred Buffett had finished the job for him.

"Well, John," Buffett told him, "sometimes you have to learn not to gag to get the job done."

Whether it was painting a wall, driving a stick-shift car for the first time, learning what brand of mayonnaise each customer preferred or properly stacking a display of sweet corn, the jobs they did and the people they met created valuable life lessons that served them well.

Bill Buffett, who is Fred Buffett's son, treated the attendees to lunch. Besides the reunion, organized by museum volunteer Hal Capps, Bill Buffett came to Nebraska from his home in Massachusetts for Saturday's Nebraska football game.

Ron Toman, who came to the reunion from his home in Colorado Springs, said he worked his way through college at the store. Like the others, he said Fred Buffett was a wonderful boss.

"I felt that he was kind of like my dad. I loved working there," Toman said. "If it hadn't been for that job, I probably wouldn't have graduated."

After driving a Buffett delivery truck, he found work as a bus driver and then served 20 years in the U.S. Air Force.

George Stryker said he spent one holiday season selling Christmas trees outside the store. He would sell a tree, go back into the store to warm up his hands, then go back out to sell more. He is a retired investment adviser.

Many of the attendees were delivery boys who would carry groceries to unlocked back doors, enter with a shout of "Groceries!" or "Buffett's!" and stack the goods on the counter, putting the cold items in the refrigerator or ice box.

Barry Larson, who worked at the store in the mid-1940s, said one day he was using a linoleum knife to cut apart a large bunch of bananas when a tarantula fell out. A co-worker saved the day with a broom — "Whack!"

Ed Waechter, now an obstetrician from Phoenix, who couldn't attend the reunion, sent a message saying he was the last store employee, helping Fred Buffett rip out copper pipes and remove other equipment in 1969, when the store closed.

"Mr. Buffett was always so kind and had an 'atta-boy' when you earned it," Waechter wrote.

Buffett customers were diverse, from elderly shut-ins to people with lavish homes with maids. One housekeeper said excitedly that Tony Bennett was expected for dinner before his concert appearance. For others, the delivery boy's visit seemed to be the highlight of the day.

John Young, who worked in the store in the early 1960s, said the Buffetts would tell the young people what to do and then trust them to complete the tasks. "I tried not to betray that trust," he said.

Some days he would hurry his deliveries so that he could spend more time with his last customer, a blind woman who seemed to need extra help. "I thought Fred would have approved," Young said.

Bill Buffett, center, son of the owner of the long-closed Buffett Grocery, and former worker Myrtle Koneck join other ex-workers at a reunion at the replica store in the Durham Museum on Thursday.

Bill Buffett, center, and former Buffett Grocery workers get a reminder of how the old business looked during a reunion at the replica store in the Durham Museum on Thursday.