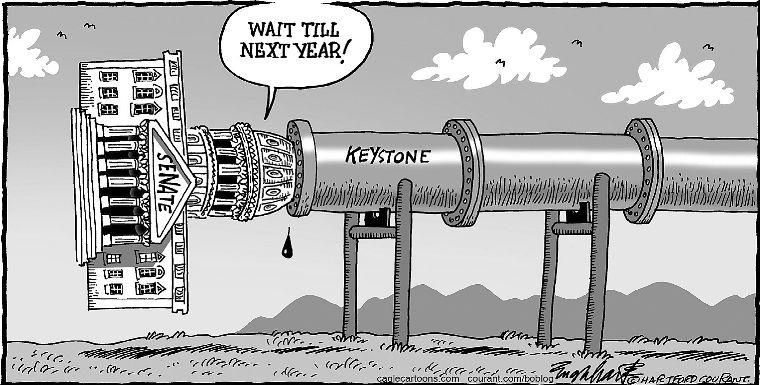 The Keystone XL oil pipeline is so popular! Ever since the Republicans won control of the Senate, it's become the Taylor Swift of political issues.

"We can act on the Keystone pipeline," the House speaker, John Boehner, said as he launched into his description of the next Congress.

The House, which believes strongly in the power of repetition, has already passed a bill authorizing construction of the final phase of the pipeline eight times.

It was also the first thing the future Senate majority leader, Mitch McConnell, mentioned in his post-election press conference. (That was before a bill to approve the pipeline failed in the Senate by one vote last week, and Republicans vowed to bring up the legislation in the next session.)

"When you say energy these days, people think of the Keystone pipeline, but that's only part of it," McConnell said.

You have to wonder who he's been hanging around with, since many Americans are actually capable of thinking about energy for quite a long period of time without ever landing on "pipeline from Canada to Nebraska."

McConnell then went on to describe an energy agenda in which the only specific item he mentioned was you-know-what. ("I mean, the employment figures connected with Keystone are stunning if we would just get going.")

Actually, employment figures are not that stunning. There'd be a few thousand workers necessary to build it, but if we want construction jobs, we've got a ton of roads and bridges that need repair.

"Keystone is certainly over-hyped as a job creator, mostly because the vast majority of jobs are temporary," said Tim Boersma of the Brookings Institution.

It's hard to figure where all the enthusiasm comes from. The Keystone XL would carry oil from the tar sands of Canada to Nebraska, where it would hook up with an existing pipeline to refineries on the Gulf of Mexico. Environmentalists hate it because oil from the tar sands expels more carbon into the atmosphere. If the pipeline isn't built, the oil will still get to the refineries by train, but at least we wouldn't appear to be encouraging the energy industry to drill the worst stuff possible.

The only people who would seem to have an intense practical interest in which way this plays out would be Nebraskans who will have to live with the pipeline, and the people who control the tar sands land in Canada. That group happens to include the famous campaign-contributing Koch brothers.

President Barack Obama is constantly being criticized by Republicans for standing between America and a jobs-rich energy boom. This would be the same president who has opened up massive new areas for oil exploration, increased the sale of leases for drilling on federal land and cut back on the processing time for drilling permits.

Story of Obama's life. He trots down the center, irritating his base, while Republicans scream at him for failing to do something that he's actually been doing all along.

In the end, it will be completely up to the president. But the story is really about the Republicans.

They're about to take over Congress and show us how they can govern. So the first thing they're going to do is hand a windfall to the energy interests that shoveled nearly $60 million into their campaigns? Terrific.

Let them prove they're better than that. There's a nice bipartisan energy efficiency bill that has been sitting in limbo in the Senate. It would help manufacturers reduce energy costs, promote model building codes and do a bunch of other useful things.

If the Republicans would forget about posturing for their campaign contributors, drop Keystone and pass the energy efficiency bill instead, it really would be a new day.

We'd all be incredibly impressed. Honest.