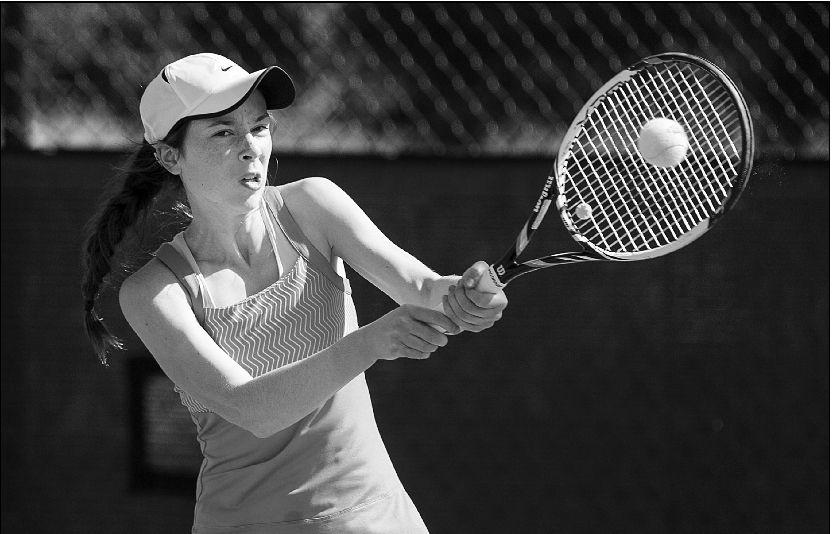 Elkhorn South freshman Samantha Mannix competes against Omaha Marian's Caroline Lahey in a No. 1 singles semifinal Friday. Mannix went on to win the title at the Omaha Westside Invitational, defeating Omaha Skutt's Teresa Kaiser, the defending Class B No. 1 singles champion, 6-3, 6-3 in the final. 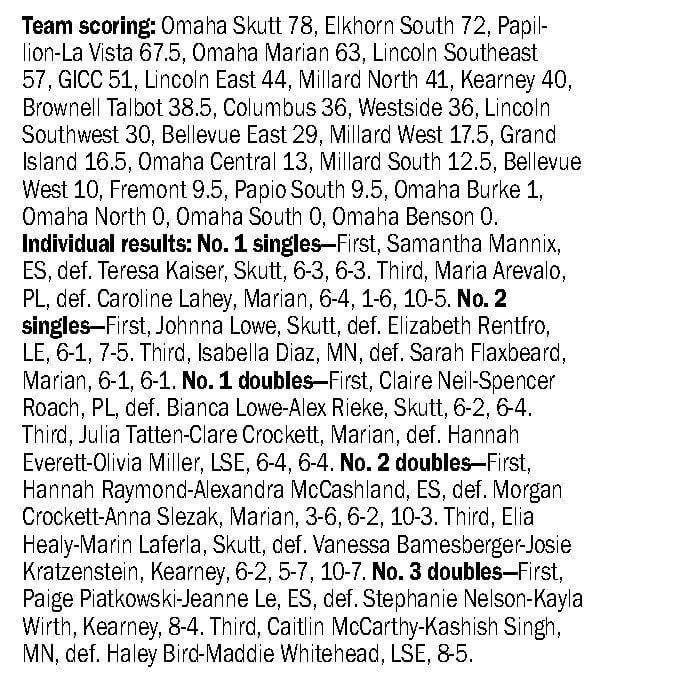 Mannix earned a 6-3, 6-3 victory over Omaha Skutt's Teresa Kaiser in the No. 1 singles championship match during Friday's Omaha Westside Invitational, which was played at the Koch Tennis Center.

"I was pretty nervous at the beginning, but once it started going I started to play more loose and play my own game," said Mannix, who has enjoyed success on the summer tennis circuit.

The 25-team invitational drew many of the top teams in Classes A and B. Class B teams finished on top as Omaha Skutt won the title with 78 points - the SkyHawks had players finish in the top three in four of the five brackets. Elkhorn South was second with 72 points.

Mannix, a right-hander with a powerful forehand, led the way for the Storm by beating Kaiser, Class B's defending state champion at No. 1 singles.

"I really wanted to win this one since it was Class A and Class B," Mannix said. "I think it's cool that I did."

In the title match, Mannix bolted to a 4-0 lead before Kaiser responded by winning the next three games to get the opening set back on serve. But Mannix then broke Kaiser's serve and finished her own service game with a forehand winner to end the set.

The second set was tied 2-2 when Mannix won the next three games. Mannix finished the match with a break of serve — she broke Kaiser's serve seven times on the day.

Papillion-La Vista finished third in the team standings with 67.5 points. The Monarchs were led by sophomores Claire Neil and Spencer Roach, who won No. 1 doubles with a 6-2, 6-4 victory over Skutt's Alex Rieke and Bianca Lowe in the final.

"It gives us confidence, and I think we feel like we've improved from last year," Neil said of the victory.

The Monarchs led 3-0 en route to winning the opening set. The second set was tied 4-4 when Neil and Roach got a break of serve and closed out the win on Neil's serve.

"We've gotten a lot better at when to poach," Roach said. "A lot of net play is what we've worked on over the winter. And we've gotten more consistent with our ground-strokes."

Elkhorn South freshman Samantha Mannix competes against Omaha Marian's Caroline Lahey in a No. 1 singles semifinal Friday. Mannix went on to win the title at the Omaha Westside Invitational, defeating Omaha Skutt's Teresa Kaiser, the defending Class B No. 1 singles champion, 6-3, 6-3 in the final.