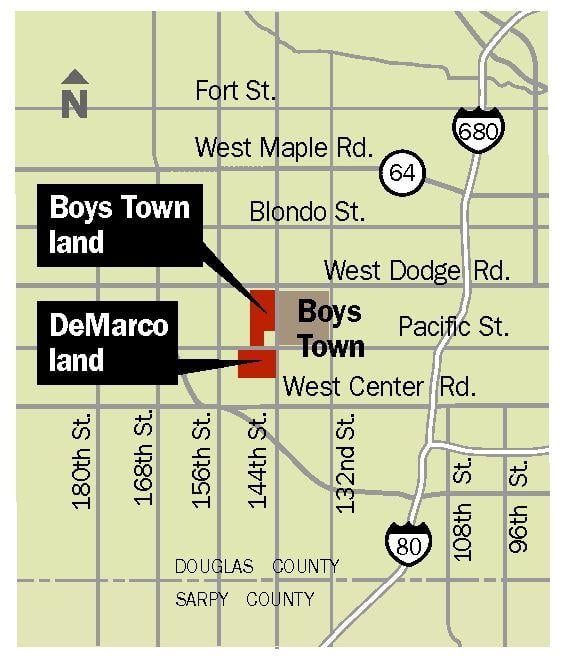 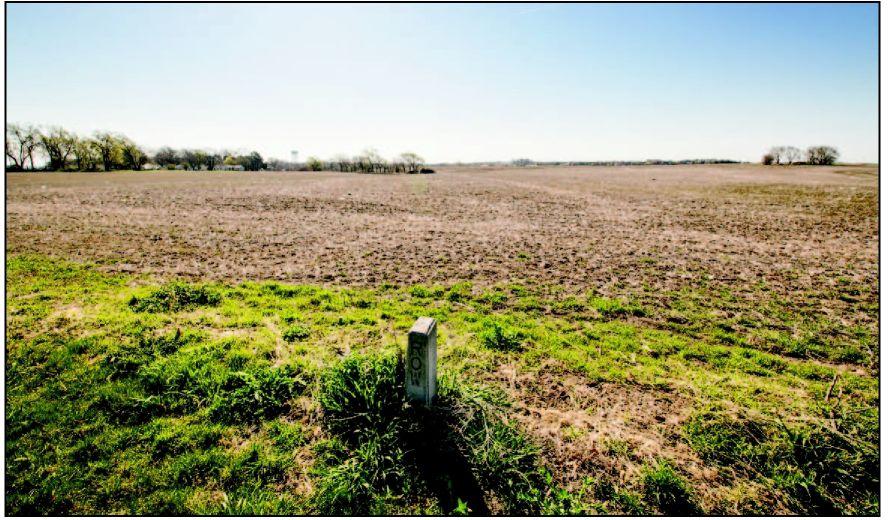 A deal is in the works to turn a 500-acre tract of land, including this section looking to the southeast near 150th Street and West Dodge Road, into a multiuse development. Applied Underwriters, a financial services firm in the Berkshire Hathaway conglomerate, is finalizing an agreement to buy the land and plans to build a hub for its workforce of between 650 and 700. Construction could start in 12 to 15 months, master developer Jay Noddle said.

A part of Warren Buffett's empire is behind the planned transformation of a nearly 500-acre tract that includes high-profile Boys Town farmland near 144th Street and West Dodge Road.

Applied Underwriters Inc., acquired a decade ago by Omaha-based Berkshire Hathaway, is finalizing a contract to buy the undeveloped land from Boys Town and the DeMarco family, Omaha developer Jay Noddle told The World-Herald.

On a piece of the vast farm area, Applied Underwriters intends to build a new hub for its local workforce of between 650 and 700. The rest is to become more offices, shops, housing, restaurants, hotel rooms, public space and more.

Said Noddle: "These are spectacular pieces of property that, developed together, will be a tremendous addition to the Omaha community."

Noddle, whose firm was tapped to be master developer, said Applied Underwriters will retain an executive headquarters in the San Francisco Bay Area but wanted an investment opportunity and updated digs for its main business operation, which has been in Omaha since 1998.

The company, which describes itself as a financial service firm that provides workers compensation and payroll processing services nationwide, has its local workforce scattered among three buildings in the Old Mill office park.

Its leaders, Noddle said, have faith in the local business climate and view the redevelopment site as a long-term investment in the company's growth.

The World-Herald reported last month that a buyer was assembling the two chunks of prime real estate for redevelopment. Until now, Applied Underwriters would not disclose its role. Noddle said the company does not seek a lot of publicity. But with buzz increasing, he said, founders Sidney Ferenc and Steven Menzies asked him to speak on their behalf.

In key ways but on a grander scale, Noddle said, the redevelopment process will unfold similar to midtown's Aksarben Village.

That development rose on the former Thoroughbred racing grounds owned by the Ak-SarBen Future Trust. The Trust partnered with Noddle, who as master developer assembled a team of developers who each focused on a part of the urban village that sprouted — offices, housing, retail, a theater, hotels and a big park. Noddle and other developers have ownership interest in Aksarben Village.

The combined Boys Town and DeMarco land is about seven times bigger than Aksarben Village, which was first announced 11 years ago and is near 67th and Center Streets.

Noddle said it's likely that two distinct corporate campuses will be built on the new site — one of which will be Applied Underwriters. Each campus would cover 30 to 40 acres and be surrounded by shops, public spaces and structures that could fit a particular character or identity.

Noddle said he's striving for a full-service hotel and retailers new to Omaha. He envisions different housing types, such as apartments, condos and villas.

A "specialty use" could reveal itself during the planning process, he said. An example, perhaps, could be a religious facility.

If all goes as hoped, Noddle said, construction could start in 12 to 15 months. Applied Underwriters would be among the first structures to rise. But tenants probably won't start moving in until late 2019 or 2020, Noddle said.

With the project yet in preliminary stages, he said, the Applied Underwriters building hasn't even been designed. The Pittsburgh-based Urban Design Associates and an HDR land planning team are working with Noddle on zoning and planning matters. (Other partners will join later.)

Two municipalities are involved, the Village of Boys Town and the City of Omaha.

The sale of the property is expected to close later this year. Since The World-Herald reported the proposed transaction last month, Noddle said, he's fielded numerous calls from developers, potential retailers and others.

He said he's keeping a list but for now is uncertain of any tenant beyond the independently managed Applied Underwriters.

Founded in 1994 by Ferenc and Menzies, the privately held Applied Underwriters was acquired in 2006 by Buffett's Berkshire conglomerate.

Even before then, the founders were familiar with Buffett's hometown.

That's because in 1998, Applied Underwriters had moved nearly all of its operations from California to Omaha to escape the difficult employment conditions of the region's high-tech boom, The World-Herald previously reported.

The company went on to do more and more business with Berkshire subsidiaries, especially with National Indemnity Co., under top Berkshire insurance executive Ajit Jain.

Ferenc said earlier that the Jain connection probably gave him the entree to Buffett, whom he met for the first time in November 2005. At that time, outside investors who previously had bought into the insurance company were interested in a "liquidation event" to sell their holdings.

Not long after that 2005 meeting, Ferenc, Menzies and Buffett reached a purchase agreement that kept the company founders in charge and offered sound financial backing for future growth.

Buffett, at the time of acquisition, said he was delighted with his new partners.

"We invest in companies that are industry leaders and that offer significant growth potential," Buffett said then. "Applied's management team has the disciplined mindset necessary to lead a profitable underwriting operation."

Ferenc said afterward that the new relationship was generating positive market activity. "Warren Buffett is recognized and respected worldwide for his business acumen and for his proven ability to choose market winners," he said.

Those who attended last weekend's annual Berkshire shareholders meeting in Omaha will recall Applied Underwriter's mascot as one of the stars of the exhibition hall: a giant inflatable St. Bernard rescue dog.

Asked whether other Berkshire-owned companies will join the new campus, Noddle said: "We've had no discussions at all about other Berkshire Hathaway-related businesses being involved."

He said that's a popular question asked of him.

A deal is in the works to turn a 500-acre tract of land, including this section looking to the southeast near 150th Street and West Dodge Road, into a multiuse development. Applied Underwriters, a financial services firm in the Berkshire Hathaway conglomerate, is finalizing an agreement to buy the land and plans to build a hub for its workforce of between 650 and 700. Construction could start in 12 to 15 months, master developer Jay Noddle said.