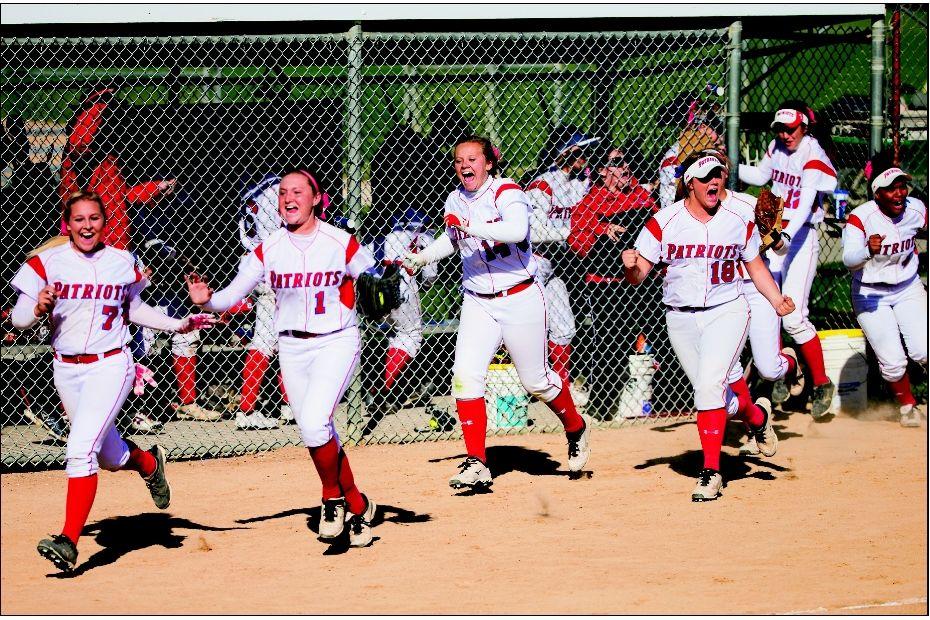 Millard South players celebrate a home run during the fourth inning of their 9-1 win over Omaha Marian in the Class A final. The Patriots put the game away with back-to-back homers by i/al Kinney and Paige Gerdes in the fourth, giving them their fourth straight championship.

HASTINGS, Neb. — They knew they were going to have to do it the hard way, but the West Point Central Catholic Softball team was happy to take any path necessary Friday to win the Class C state Softball championship.

After being sent to the elimination bracket Thursday rather decisively by Ashland-Greenwood (18-6), the Bluejays first eliminated Wayne 9-4 Friday before exacting their revenge on another covey of Bluejays in the championship bracket.

Because Ashland entered the game undefeated in the tournament played at the Smith Softball Complex, West Point GACC needed to beat Ashland twice to claim the school's first Softball title.

That's precisely what West Point GACC did by forcing a second game with a 10-6 victory in the first title game. They didn't let up in game two, using a three-run home run by sophomore Lauren Wobken and an RBI double by Ashley Minnick in the third inning to hold on for a 4-2 win.

"We were going on adrenaline," GACC coach Allan Rreikemeier said. "We thought we could play with their team and we had something to prove to those guys."

It was the fourth consecutive season GACC has been to state. In 2012 the Bluejays were runner-up to Arlington, so Kreikemeier said this team didn't want to settle for second best.

"We've been working so hard to get here," Rreikemeier said.

Winning pitcher Emily Franzluebbers had six strikeouts and gave up just five hits and six walks. Rreikemeier said the free passes are something that Franzluebbers has battled this season.

"Her M.O. for the year has been a lot of walks," Rreikemeier said. "I told her 'You've got to let them hit the ball, attack them and let the defense play behind you.'"

Ashland scored single runs in the fourth and fifth innings but managed just one hit - a single with two outs in the seventh - in the final two innings.

Payten Glassburner scored on a double by Madalyn Schuster in the fourth after leading off the inning with a walk. Taylor Goff then led off the fifth with a walk and eventually scored on a passed ball.

Ashland coach Amber Dutcher said her 20-14 team was able to shrug off the loss in the first game and re-focus for the title matchup. She said the lower-scoring game proved that approach almost worked.

"I think they got back to where they were a little lighter and playing like that," Dutcher said. "We have a lot of good chemistry on this team. We had girls in scoring position in several innings but we just couldn't get it done."

This was the fifth time Ashland-Greenwood has finished as the Class C runner-up since 2001.

HASTINGS, Neb. — Millard South's Softball team, especially its nine seniors, have known for nearly a year what was at stake in Friday's Class A state championship game.

"I think from the moment we got last year's trophy it was time to start getting ready for next year," Patriots pitcher Jordan Johnson said. "It would not have been the same without a fourth state championship."

Not that they're greedy, but those seniors knew they had a chance at state history if they could get back to the title game.

The Patriots (31-2) defeated Omaha Marian 9-1 in five innings Friday at the Smith Softball Complex, joining an exclusive list of schools that have won at least four consecutive state titles.

Marian is the fourth school to fall to the Patriots in their championship run.

In 2011, Millard South defeated Lincoln Southwest 6-2. The 2012 title came in a 12-1, four-inning victory over Papillion-La Vista South, and the Patriots defeated Papillion-La Vista 13-4 last season. It was the fifth Softball title in school history; the first came in 2005.

Millard South coach Steve Rerkman said what makes this team stand out is its consistency. The Patriots run-ruled opponents in 21 of their 31 victories and set a state record for runs per game at just over 10.

"It's not just about what one player did this season or in this tournament," Rerkman said. "It's what the whole team did. We have seven girls on our bench that would play for a lot of other teams."

Marian (27-6) earned its first berth in the state championship game by routing Papillion-La Vista 12-0 in three innings in the elimination bracket. The Crusaders scored six runs in the first inning and five more in the second.

The Monarchs (32-6) committed five errors and only got two hits off pitcher Rellyn Daly. Marian had 10 hits, and seven of their 12 runs were unearned.

"She's why we were where we were today," Marian coach Mike Heard said of Daly. "She was a workhorse this season, and she probably threw over 600 pitches for us in this tournament."

Johnson was the workhorse for the Patriots, leading the team from the circle and at the plate.

Johnson became just the third pitcher in state history to start and win three state championship games. The other two were Peaches James of Papillion-La Vista (1996-98) and Ashley Hagemann of Elkhorn (2005-07).

Johnson surrendered just four hits and one earned run. Marian took its only lead in the second inning after Emma Raabe scored.

In the bottom of the second, the Patriots were able to get to Daly and force the Crusaders defense to make plays. Prior to the state tournament, only Papillion-La Vista and Millard West scored more than four runs against Marian.

The biggest blow in the second inning came from Johnson — a three-run home run to center that plated fellow seniors Emily Hove and Leah Ralkwarf.

It was the second home run of the season for Johnson, who hits eighth in the Patriots' lineup.

"I was surprised that it went out," Johnson said. "I was just trying to get those runners in and hit it hard."

"I'll take it," Rerkman said. "Jordan's a good hitter, and a lot of teams will hit for their pitcher. She's a senior and she can do it."

This was the first year Johnson has been a regular in the Patriots' batting order. While Rerkman believed Johnson wasn't nervous about hitting at the state tournament, Johnson disagreed.

"It was different and I was a little nervous that first game," Johnson said. "After that, I was able to settle in and be a little more comfortable. I just needed to get that first game out of my system."

The Patriots scored six runs in the fourth to end the game two innings early. Third baseman Natalie Wilson — the No. 9 hitter in the Patriots lineup — opened the scoring with an RBI triple that plated Ralkwarf.

After sophomore Rylie Unzicker — a Nebraska recruit — walked, Wilson scored on a sacrifice bunt by right fielder Camille Fowler. Unzicker moved to second on that bunt, stole third then came home on a throwing error.

"There was a lot of pressure on these girls this year," Rerkman said. "The girls were just dialed in and knew what they wanted to accomplish, then they went out and did it."

Millard South players celebrate a home run during the fourth inning of their 9-1 win over Omaha Marian in the Class A final. The Patriots put the game away with back-to-back homers by i/al Kinney and Paige Gerdes in the fourth, giving them their fourth straight championship.