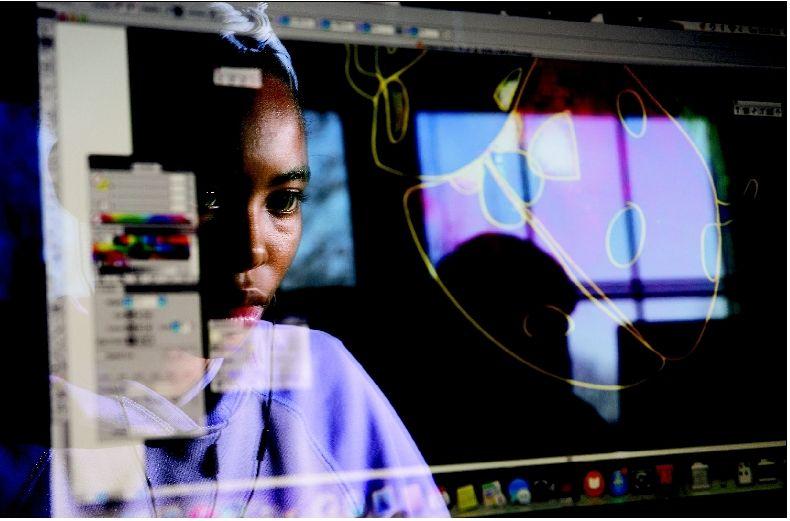 Freshman Tamara Harris works on a project this week in teacher Paul Hinrichs' computer graphics class at Benson High. If a task force's recommendation for the school is followed, Benson students would be enrolled in one of three career pathways by their sophomore year. 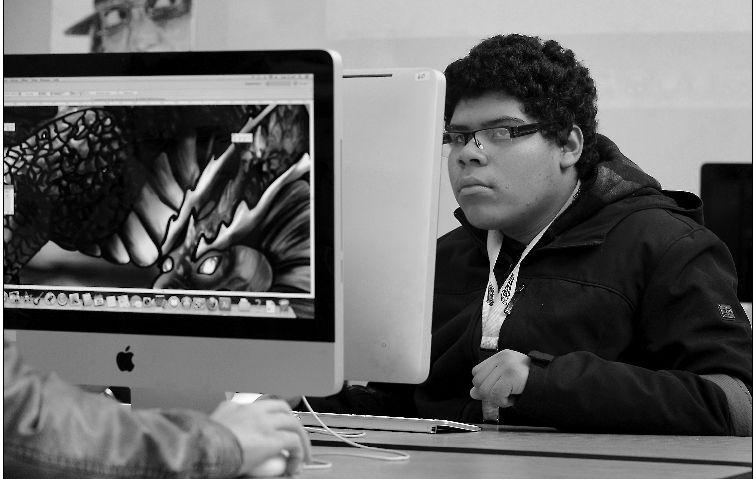 Freshman Antonio Pinkney, right, is hard at work in a computer graphics class at Benson High School. A task force charged with improving the school's flagging fortunes says a new job-training focus could increase enrollment and would also simply make it a better school.

ONLY IN THE WORLD-HERALD

The report, a copy of which was obtained by The World-Herald, answers a challenge that OPS board members issued to Benson staff and community members in October: Figure out how to reverse the flagging fortunes of a high school whose enrollment has slid steadily over the years.

"I think Benson needs reinventing, for a number of reasons, the least of which is, it's losing students, it's not attracting them," said task force member Woody Bradford, a Benson alumnus.

The 26-member task force — a mix of Benson alumni, teachers and business and community representatives — came up with the idea of a "wall-to-wall" career academy. By sophomore year, every student would enroll in one of three career pathways: business and entrepreneurship, health professions or

The school has been slowly phasing in career-focused programs centered on those three job fields, including an electrical apprenticeship program last year that paired students with a local union.

The latest proposal is preliminary. If approved, it would not be fully implemented until at earliest the fall of 2017. OPS administration and the school board have yet to sign off on the idea, and several school board members said it was too soon to comment. Task force members will spend the next several weeks presenting their recommendations to community groups.

Benson Principal Anita Harkins and OPS Superintendent Mark Evans said the program could bring new focus to Benson and lure students who have increasingly opted for schools such as Central and North.

"We do want to increase enrollment, and I think this is going to do that, to create some excitement," Evans said.

Benson's enrollment this past fall was 1,093, down slightly from 2013-14. In 1970, before white suburban flight, busing plans and the construction of Burke and Northwest started draining students away, the school's enrollment stood at 2,249.

Subsequent decisions, from the OPS busing policy to an International Baccalaureate program that went to Central instead, have only made it more difficult for Benson to stand out among the seven OPS high schools, said task force member Dr. Marty Ramm, a Benson alumnus and parent.

Harkins and other task force members said the curriculum would bring focus and an identity to the school and let teachers experiment with trends such as project-based learning and flipped classrooms, where students watch or read lectures at home and do homework in class.

"I think we came at it in the spirit of let's increase enrollment, but also, let's make Benson a stellar school, one that stands out as far as its programming and its graduates," alumna and task force member Carol Russell said.

President Barack Obama mentioned it in Tuesday's State of the Union speech. And Nebraska Gov. Pete Ricketts has said he, too, wants to bolster career education. Ricketts said he wanted an introduction to careers such as electrician and welder to begin in junior high in Nebraska schools.

High school career academies, popular in cities such as Nashville, Tennessee, have shown impressive results when it comes to increasing attendance and graduation rates, as well as linking students with future employers.

Harkins said the three fields chosen for Benson are aimed to tap into local and national job growth and capture the interests of students.

With $5 million of OPS's recent $421 million bond issue earmarked for a potential career center at Benson, task force members discussed expanding vocational classes at Benson, mirroring the district's former Tech High. But members concluded that that could scare off students planning to go to college.

The three career themes — starting sophomore year, every student would choose one — would apply mostly to electives. Each academy would still require students to take classes in core subjects such as English, math and history, and students would still have access to honors and Advanced Placement classes.

Career classes within each academy would be designed to be broad, with the ability to appeal to students headed to college as well as those who want a well-paying job straight out of high school, Harkins said.

"It was absolutely unanimous that we didn't want a drop-in technical center, but a comprehensive high school that does college prep and also has this career exploration theme," Ramm said.

The report estimates that startup costs for the academies could exceed $800,000, not including capital costs for renovations. Teachers would require training to shift to the career academy model, and more teachers with industry-specific experience might be necessary.

Task force members agreed on one thing needed to ensure that the academies succeed: time. The report asks OPS to give Benson at least six years to get the academies off the ground.

"We're hopeful the board will approve it and be able to get behind it and stick with us for the period of time it's going to take," Bradford said. "This isn't going to be solved overnight."

Ramm and Russell said marketing and community buy-in will be key, too. Benson must reach out to middle schools to explain the concept of career academies to parents and students.

In a survey and study conducted by Gallup in the spring, several teachers and parents interviewed noted the poor roll-out of other Benson initiatives, such as the ill-fated decision-science magnet theme, and expressed concerns that few people understand career academies. Others worried that students could feel pigeonholed by having to choose one of three career paths.

What about those kids who aren't interested in construction, health or business?

Harkins said the three pathways are flexible enough that most students could find classes that appeal to their interests. A girl who's interested in becoming a professional dancer could study anatomy or nutrition, or learn how to market herself in a business class, she said.

"Some might say 14 is a little early (to pick a career), but it's a way for them to experiment with different fields of study," she said.

"I think students need to explore, figure out what they want to do," Evans said. "And if they don't like something, I'd sure rather they figure that out now than the second year of college."

HOW IT WOULD WORK

• Starting in the fall of 2017, freshmen would be divided into small groups. Each student would develop a personalized learning plan to plot career goals and class sequence.

• As sophomores, each student would pick one of three career academies.

• Each academy would include a career ladder, showing students how they can pursue that career full-time after high school or continue school.

• Every student would have access to some type of work-based learning experience, such as internships, summer jobs or mentoring, and an opportunity to earn college credits or an industry certification.

• Academies would incorporate the same kind of "teaming" approach used in many middle schools, where students and teachers are grouped and collaborate more, and each academy would have its own advisory council, with representation from businesses or industries.

• In the future, task force members recommended that Benson institute some type of "early college" program, like one at Millard South, that allows students to graduate with a high school and an associate degree.

Freshman Tamara Harris works on a project this week in teacher Paul Hinrichs' computer graphics class at Benson High. If a task force's recommendation for the school is followed, Benson students would be enrolled in one of three career pathways by their sophomore year.

Freshman Antonio Pinkney, right, is hard at work in a computer graphics class at Benson High School. A task force charged with improving the school's flagging fortunes says a new job-training focus could increase enrollment and would also simply make it a better school.