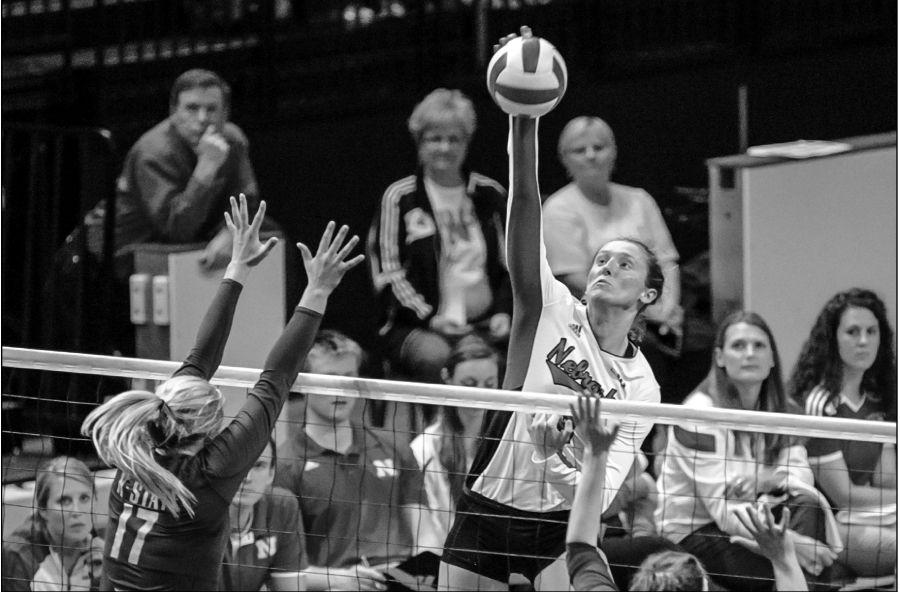 Kadie Rolfzen put down 12 kills and hit .381 in the Huskers' sweep. They open the regular season with the Nebraska Invitational on Aug. 28 and 29 at the Devaney Center. 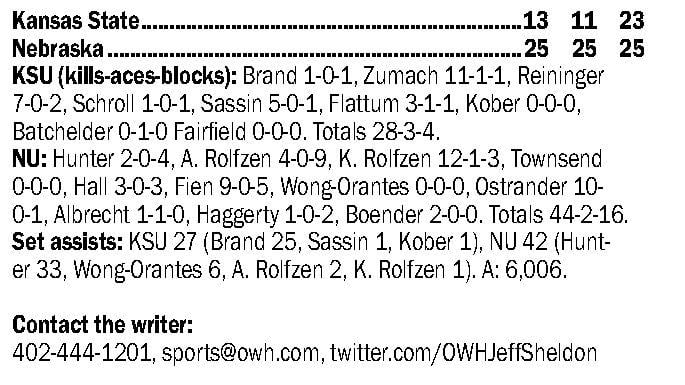 GRAND ISLAND, Neb. — In an honest moment after Nebraska's spring exhibition volleyball match against Kansas State, Amber Rolfzen admitted she wasn't wild about her trial run moving from opposite hitter to middle blocker.

"The first day, I hated it," she said. "But I've been told it looks natural for me. I'm getting used to it. I really enjoy it. Just getting used to, I think that's the big thing."

Rolfzen had been training in the middle for just a few weeks during Nebraska's spring practice, but you couldn't convince the Wildcats she was a novice after Rolfzen came up with nine blocks as the Huskers earned a 25-13, 25-11, 25-23 sweep Saturday at the Heartland Events Center.

It was part of a big night across the board for Nebraska's front line: NU racked up 16 blocks and held the Wildcats to .036 hitting.

Nebraska showed off its versatility before a sellout crowd of 6,006. NU coach John Cook started a lineup with All-Big Ten outside hitters Kadie Rolfzen and Kelsey Fien on the left and senior Alicia Ostrander at opposite hitter with Amber Rolfzen and Cecilia Hall in the middle.

In the third set, Kadie Rolfzen and Ostrander flipped positions, and both finished with double-digit kills to lead the Husker attack. Kadie Rolfzen had 12 kills and hit .381, while Ostrander chipped in 10 kills and Fien added nine with only one hitting error.

The evening showed fans in Grand Island what Cook had decided through the four weeks of spring practice: that the Huskers will have plenty of options in setting a lineup this fall. Those options will increase even more when touted freshman Mikaela Foecke joins the team. The Gatorade national player of the year from Fort Madison, Iowa, could play either opposite hitter or middle blocker, giving NU an enviable amount of flexibility.

Amber Rolfzen was Cook's natural choice to move into the middle this spring after two reserve middles, Kira Larson and Melanie Keil, left the team. Rolfzen was in on five of NU's seven blocks in the opener, including stuffs on three straight rallies to give the Huskers a 21-12 lead.

"She's an exceptional blocker. She's a shut-down blocker," Cook said. "Big Ten teams fear her when she's been on the right side. Coaches have told me she's the best right-side blocker in the conference."

The match also was the unofficial debut of redshirt sophomore setter Kelly Hunter, who had a double-double Saturday with 33 assists and 14 digs in her first match as the established starter. Hunter added four blocks and guided NU to a .371 attack percentage over the first two games. Nebraska finished at .294 for the match after the third set featured some lineup switches.

"We were humming pretty good in the first two games," Cook said. "I think Kelly has a chance to be great. She's a really good leader on the court. She moved hitters around today. She started taking some risks a little bit. She ran a great back row with tempo. Those guys are flying in there hitting that ball, which is not an easy thing to do."

Amber Rolfzen, who played with Hunter at Papillion-La Vista South, said the setter "looks very confident in herself."

"That kind of showed today, too," Amber Rolfzen said. "She's ready to go. You can tell she's ready to get the offense rolling and she's just ready for the season to start."

The Huskers will try to run a more up-tempo offense this fall, and they did it well in stretches Saturday, though Cook said upping the speed will be his big priority for Hunter this summer. Team wide goals going into the summer, Cook said, are continuing the physical gains from a successful winter conditioning program and improving from a good to great serving and passing club.

But confidence is higher than it was last spring, players said. It grew through spring practice, and the lone exhibition match Saturday did little to dampen their enthusiasm.

"We were so excited. We were really amped up in the locker room," Fien said. "There was so much energy."

Kadie Rolfzen put down 12 kills and hit .381 in the Huskers' sweep. They open the regular season with the Nebraska Invitational on Aug. 28 and 29 at the Devaney Center.