In aisle five: art, chutzpah and introspection
0 comments
Share this
1 of 2 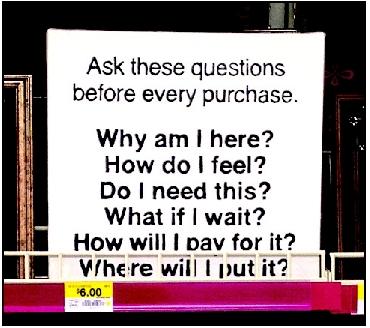 Scott Blake leaves notes and even paintings in stores with six questions for shoppers.

Shoppers paying close attention likely realized that the tags were not part of Walmart or Target corporate strategy. Someone — in violation of store policy — was trying to make them pause and think before they put their money toward, say, a new TV or Blu-ray player.

But who, and why?

The answer strolled into the Walmart Supercenter near 180th Street and West Center Road last week. He arrived wearing a lived-in polo shirt, shorts and sandals and carried a beige tote bag over his shoulder. He made his way through the store, affixing a couple of hang tags on items along the way, including the store's own fire extinguisher.

He stopped at one of the store's main intersections and looked around for something.

"Art supplies?" he asked no one in particular before spotting an end-cap stocked with paints. "Oh, there."

He stepped into the aisle, surrounded by glitter jars and craft sticks.

"I'm pretty sure what I'm doing is illegal," he said of his no-longer-anonymous hang-tag project. "But it's better for them

It's not easy to ignore Scott Blake. The Omaha artist has been making provocative statements — through his art and just in general — for years now. He's best known for his bar code art, including his large-scale celebrity portraits created entirely from functioning bar codes.

He's less known, but more notorious, for his rogue contribution to the "0!" public art campaign several years ago, when Blake mimicked sexual congress with the various O-shaped sculptures and compiled the resulting footage into a video scored by Van Halen's "Hot for Teacher."

Blake's "Stop Shopping" hang tags were different in that he chose to remain anonymous, at least for a while. He was initially inspired by Morgan Spurlock's satirical documentary "What Would Jesus Buy? "starring performance artist "Reverend Billy" Talen.

The questions on Blake's tags came from a shopping addiction therapist featured in the film, who hands out similar cards to her clients. Instead of passing them out to individuals, Blake decided he'd distribute them at the source.

One day in late 2012, Blake visited every Walmart and Target in the metropolitan area. He placed 50 hang tags at each store — around 1,000 in all. He avoided the food aisles but otherwise spread them around indiscriminately. Electronics worked especially well. It took him around eight hours beginning to end.

Mike Olson, co-manager of the Walmart near 180th and Center Streets, confirmed Blake's suspicion: The hang-tag project broke a store rule prohibiting the distribution of outside information or materials. It happens from time to time, Olson said, though he hadn't heard of Blake's particular transgression.

"We encounter all sorts of things," he said.

Blake's motive wasn't to judge people or to pretend he didn't make similar frivolous decisions. It was, quite simply, to get people to stop and think - the tags acting as a tiny counter-current in stores otherwise designed for consumption.

"I don't mean to attack people and say, 'You're bad for buying things,'" he said. "The last thing I would want is for someone to feel bad."

Afterward, he told a few people what he'd done but kept mostly quiet. He liked the idea of anonymity, each tag sparking a little mystery. He was also aware of how his message and method might be received. In a country where consumerism is sometimes equated with patriotism — where Americans were encouraged to buy things as a response to 9/11 — asking people to reconsider a purchase could be seen as a subversive act. Staying relatively anonymous seemed like a good idea.

But something changed Blake's mind earlier this year. Maybe it was the news about the National Security Agency, he said, and its monitoring of U.S. citizens. Maybe the idea of anonymity itself started to seem like a delusion.

Whatever it was, he unmasked himself on Facebook and Instagram. He also took the project to its logically illogical next step: He now sells ready-made tags for a dollar a pack and provides a free downloadable version for people to print on their own. He also paints those same six questions on 12-by-12-inch canvases and packages them like store-stocked merchandise. For each $100 painting sold through his website, he promises to "shop-drop" an additional copy at a local store.

He kept one such painting in his tote bag last week.

The idea of taking his art — the physical work and the performance aspect of it — into an unconventional venue excites Blake, who has long been skeptical of galleries as the default spaces for showing and experiencing art.

After all, where else could his message be better received?

"You know what? I'm showing in Walmart," he said, preparing to unsheathe his latest canvas and leave it behind. "My work is at a Walmart Supercenter. Original work."

Scott Blake leaves notes and even paintings in stores with six questions for shoppers.