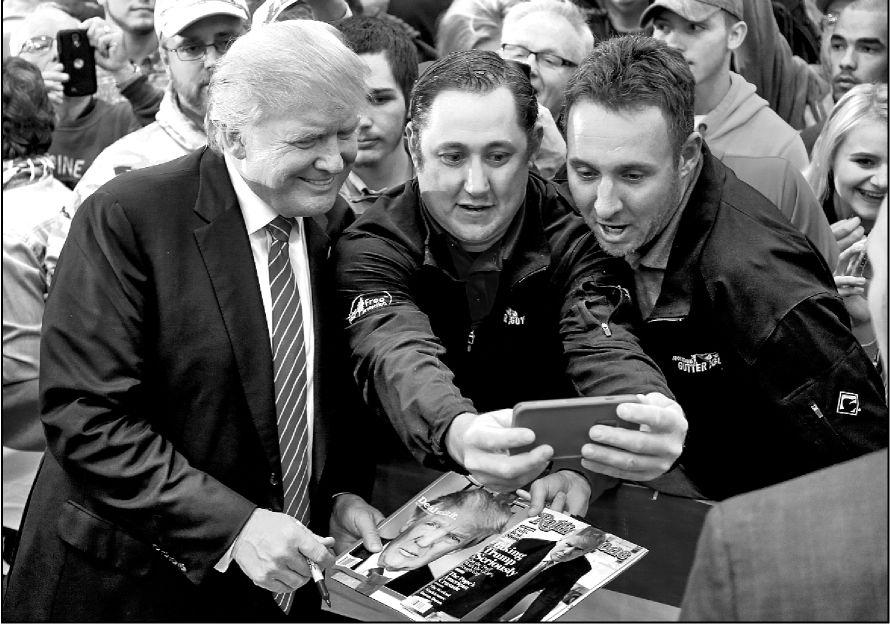 Trump superfans take a picture with their man after a rally last week in Sioux City, Iowa.

It was Del Casale's fourth Trump event in three states and the first time she had volunteered for a political campaign. She cheered through the Republican presidential candidate's hourlong speech, and afterward she posed for photos with new friends and plugged a private Facebook group she helps moderate, "Trump Defeats the Establishment."

"I feel, for the first time in my life, that I am not invisible," said Del Casale, who decorated her campaign T-shirt with 14 large pro-Trump buttons. "For the first time, I feel like there's actually somebody running for president who is speaking on behalf of myself and others like me."

Del Casale is a prime example of the superfans who flock to Trump. They drive hours to campaign events and wait in Black Friday-like lines to get a close spot. Many have never attended a political rally or regularly voted. Yet they devote hours each week to pro-Trump Facebook clubs and Twitter accounts and try to convince their relatives, friends and neighbors that the bombastic billionaire should be the leader of the free world.

"He hits the sore points that everybody kind of wants to steer around," said Brett Hevner, a newly married 25-year-old who lives in Anderson and works for Pepsi. "That's what I like about him: He's not afraid to get in there and take the bullet. He's not scared of anything, and that's what we need."

Trump's campaign is not like most — and neither are his crowds of supporters. A speech in North Charleston attracted a group of middle-age moms wearing homemade pro-Trump T-shirts and carrying elaborate signs, as well as a 71-year-old woman who watches cable television 15 hours a day to keep up with all of Trump's comments.

An appearance in rural Massachusetts attracted a man who has wanted Trump to run since 2012, as documented in a faded T-shirt featuring a cartoon Trump telling President Barack Obama that he is fired. At a rally in Las Vegas, Trump invited onto the stage a star-struck fan clutching a copy of People magazine featuring his face.

"I love Mr. Trump!" yelled Myriam Witcher, an immigrant from Colombia who bounced with the excitement of a teenage girl meeting a boy-band heartthrob. "I am Hispanic, and I vote for Mr. Trump!"

At the rally here in Anderson, cars in the parking lot were more likely to have a bumper sticker plugging a university, sports team or honors student than a political campaign. Inside were military veterans who were given seats of honor, high school students who won't be old enough to vote next year and a 68-year-old retiree who attends as many Trump rallies as he can wearing a black-and-gold sombrero.

"I wear this in support because I feel like some Mexican people do support him and everything," said Jim Yates of Laurens, South Carolina, a veteran of the Vietnam War and retired toolmaker whose favorite politicians are the ones who challenge longtime incumbents. "What I like about Trump is he tells it like it is. ... We gonna hopefully build that wall, 25 or 30 feet. I'm gonna go down there and help him."

Trump's operation has been trying to identify his most passionate fans and funnel their energy into more traditional campaign activities. Del Casale connected with one of Trump's organizers on Facebook and agreed to help at the rally. Wearing a laminated volunteer pass, she handed out yard signs, greeted the more than 5,500 people who arrived and cheered until she was hoarse.

When Trump said Republicans haven't done enough to confront illegal immigration, Del Casale shouted, "We're going to build a wall!" As he promised to get rid of Common Core education standards, she agreed: "It's child abuse!" And as Trump acknowledged that sometimes his tone can be a bit rough, she shouted, "We don't need nice!" As Trump left the stage and rock music blared, she began to dance.

Until this year, Del Casale had never volunteered for a campaign or really cared about politics. She grew up in a blue-collar family in Brooklyn and was the first in her family to attend college.

Early on, she voted for Democrats, including Bill Clinton. But about a decade ago she became disenchanted with both parties. It felt like the Democrats were no longer "the people's party," she said, so last year, she voted for Republicans for the first time — only to be disappointed that not much has changed in Washington.

"We're stagnant," Del Casale said in describing her family's finances over the past few years. "We're fortunate. It's sad — we are fortunate to be stagnant as opposed to jobless. But that's when Mr. Trump says the dream is dead. I would rather have a dream of prospering and continuing to improve."

Del Casale remembers watching a replay of Trump's campaign announcement speech in June and thinking, "I'm listening to the message I want to hear."

For years, she says, she has grown more and more frustrated. She's angry that so much of her paycheck goes to taxes, yet the public schools in her area aren't up to her standards. She's angry about jobs being sent overseas and foreign workers being imported, along with chief executives making huge salaries while paying their employees low wages. She's angry that going back to school has yet to pay off for her. She's angry that the government doesn't do enough to help people find jobs and decrease their dependence on food stamps and other entitlements. And she's angry that the border is not secure and fears that Muslim refugees are being allowed into the country without enough vetting.

"If you don't keep our country safe, then any other issue that people care about — what does it matter?" Del Casale said. "Say what you will about Muslims, but they're congregating all over Europe, and it's scary. The streets are a mess. The terrorism that's going on. It's going to get worse and worse."

These are the sorts of issues that Del Casale is confident that Trump will address. She didn't know much about him before this summer, having never regularly watched his reality TV show, "The Apprentice."

But she likes that he owns so many companies and has become so wealthy, which she says are signs of his intelligence, courage and leadership. Del Casale admires that he has vowed to spend millions of his own on the campaign — along with giving up time with his family and businesses.

"I'm stretched so thin, but if he needed the money, I would shell it out," she said. "I would sacrifice."

"I feel, for the irst time in my life, that I am not invisible. For the irst time, I feel like there's actually somebody running for president who is speaking on behalf of myself and others like me." Paulette Del Casale

Trump superfans take a picture with their man after a rally last week in Sioux City, Iowa.