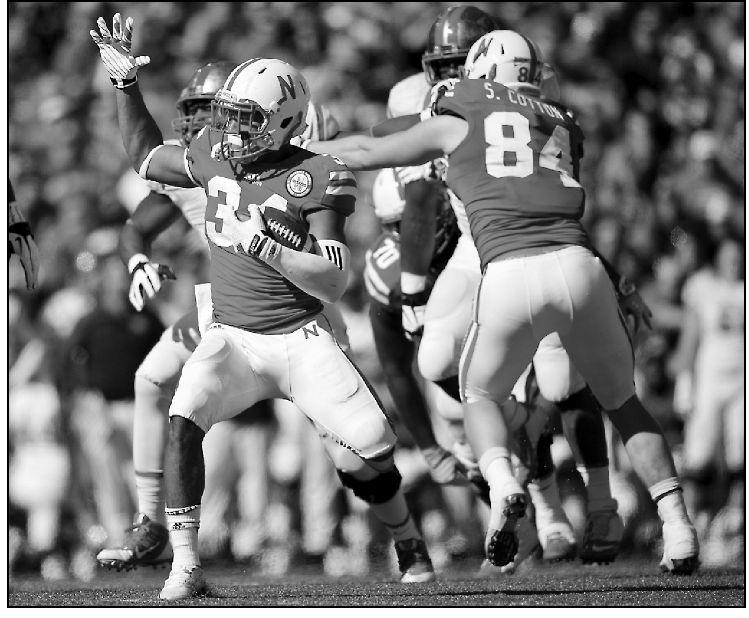 Of Nebraska's 41 carries against Rutgers on Saturday, sophomore l-back Terrell Newby got 10 of them. Here, Newby picks up some of his 30 rushing yards.

LINCOLN — Me: "Do you get tired of hearing people say run the damn ball?"

Funny you should ask. Because afterward, the head coach was as ticked off as he's been at a press conference since the post-Iowa debacle. The offensive coordinator was so frustrated, he looked like he needed an ice cream cone and a hug.

Rutgers regularly shuffled side-to-side before the snap, causing Nebraska's offensive linemen to jump. Or worse, center Mark Pelini hurried to snap the ball to cut off a slanting defender and Tommy Armstrong fumbled the snap.

"I don't know why all of a sudden it became an issue," Beck said. "It just did."

It's only five or six bad plays, Beck said. But you're guaranteed only 12 games in a season.

"I'm a perfectionist," Beck said. "... You work so hard all week and all year ... It wasn't that they beat us. We couldn't snap the ball to the quarterback. (He laughs.) That's concentration. That's like tying your shoes, you know? It should be that easy."

It should be that easy. But snapping the ball is not really why his play-calling reputation took another hit Saturday.

Me: "Do you understand the frustration when (Ameer Abdullah) rips off two for 50 and you throw it three straight times the next possession?"

Beck: "No. You think every time we hand him the ball, he's gonna run for 50? What if he runs for 2? Should they get frustrated, too, 'cause he didn't run for 50? Is that the line's fault then? Or is it his? Did he miss it? Or is it a bad play call because we should've ran the other way?"

So here's the situation - and it seems to come up a lot in the Beck era. Nebraska is beating the snot out of Rutgers in the second quarter. Abdullah is looking like Barry Sanders.

I can only imagine being a defender in the open field as No. 8 is sprinting toward you. Right or left, right or left? Which way is he gonna cut? Before Rutgers safety Lorenzo Waters knew the answer, Abdullah was gone. Fifty-three yards. Boom. That was Abdullah's first touchdown.

Next drive, here we go again. After an Armstrong completion to Jordan Westerkamp, Abdullah darts left. And I'm not exaggerating, my first thought was, "That's a loss." There was no hole. None.

There's an old joke: The only person who held Michael Jordan under 20 points was Dean Smith. Well, I know some Husker fans who might say the same about Abdullah, 300 yards and Tim Beck.

In the grand scheme, this possession meant nothing to Nebraska's season. Nothing. Rutgers didn't take advantage of the turnover. Abdullah ran for 225 yards. NU won by 18.

And yet, that one moment reinforced so many criticisms of Beck, which really began at Wisconsin three years ago. It echoed the mistakes of Shawn Watson and Bill Callahan.

Why in the holy name of Cory Schlesinger, Husker Fan says, can't Beck stick with what's working? Why does he need to show off his playbook? Why can't he — oh, how should we put this — run the damn ball!

I don't need to inform Beck of his critics. He hears plenty from them. And here's what he says.

"Guys, you can't always just hand the ball to Ameer. I mean, everyone's gonna know. You can't just do that.

"You've got Kenny Bell on the edge, you've got guys like Westerkamp and De'Mornay (Pierson-) El and Tommy. They're good football players, too. You've got to spread the field and you've got to keep teams off balance."

Following the two Abdullah touchdown runs, Beck called the play-action pass, he said, because Nebraska had shown a tendency to run on first down. He wanted to break tendency.

If you don't, eventually they're running 10 guys at the line of scrimmage — "You can't block 'em, I don't care how good you are."

For the record, the Huskers had rushed only six of 10 times on first down. And the first of Abdullah's touchdowns was against a run blitz, so it's not like NU can't run against an eight-man box. But let's give Beck the benefit of the doubt.

Abdullah's a great kid, Beck said. Fans want to see him and his teammates do well. And they are doing well.

"But they're doing well because we've got the right plays called at the right time. And guys are blocking. Sometimes it takes a little bit to find, what's the best way? We put formation into the boundary to get the defense where we want so we can spring those runs. It's not just hand it to him and go. There's stuff that goes into getting it all set up."

"... You can say, just get it to Ameer and he'll make 'em miss. But some games like Michigan State, we didn't make 'em miss. Then what? Then I should throw it more. So you're always wrong.That part comes with the job. And that's OK."

How many times did we run it today, Beck asked. Forty-one runs in 63 plays. Two-thirds.

You know what, Beck is right about some of that. Big plays don't appear out of nowhere. There's a chess game that many fans don't see. Balance and unpredictability are important. And Tim Beck knows more about offensive scheme than 99 percent of us ever will.

But sometimes he's wrong, too. Sometimes he needlessly complicates the offense. Sometimes he should make defenses solve his last trick before he attempts the next one. Sometimes it all crystallizes in the form of one bad possession in one forgettable game.

It's his fourth season. He's making $700,000 a year. And until Nebraska's offense performs against a team like Michigan State, 42 points against Rutgers isn't worth an ice cream cone.

Of Nebraska's 41 carries against Rutgers on Saturday, sophomore l-back Terrell Newby got 10 of them. Here, Newby picks up some of his 30 rushing yards.