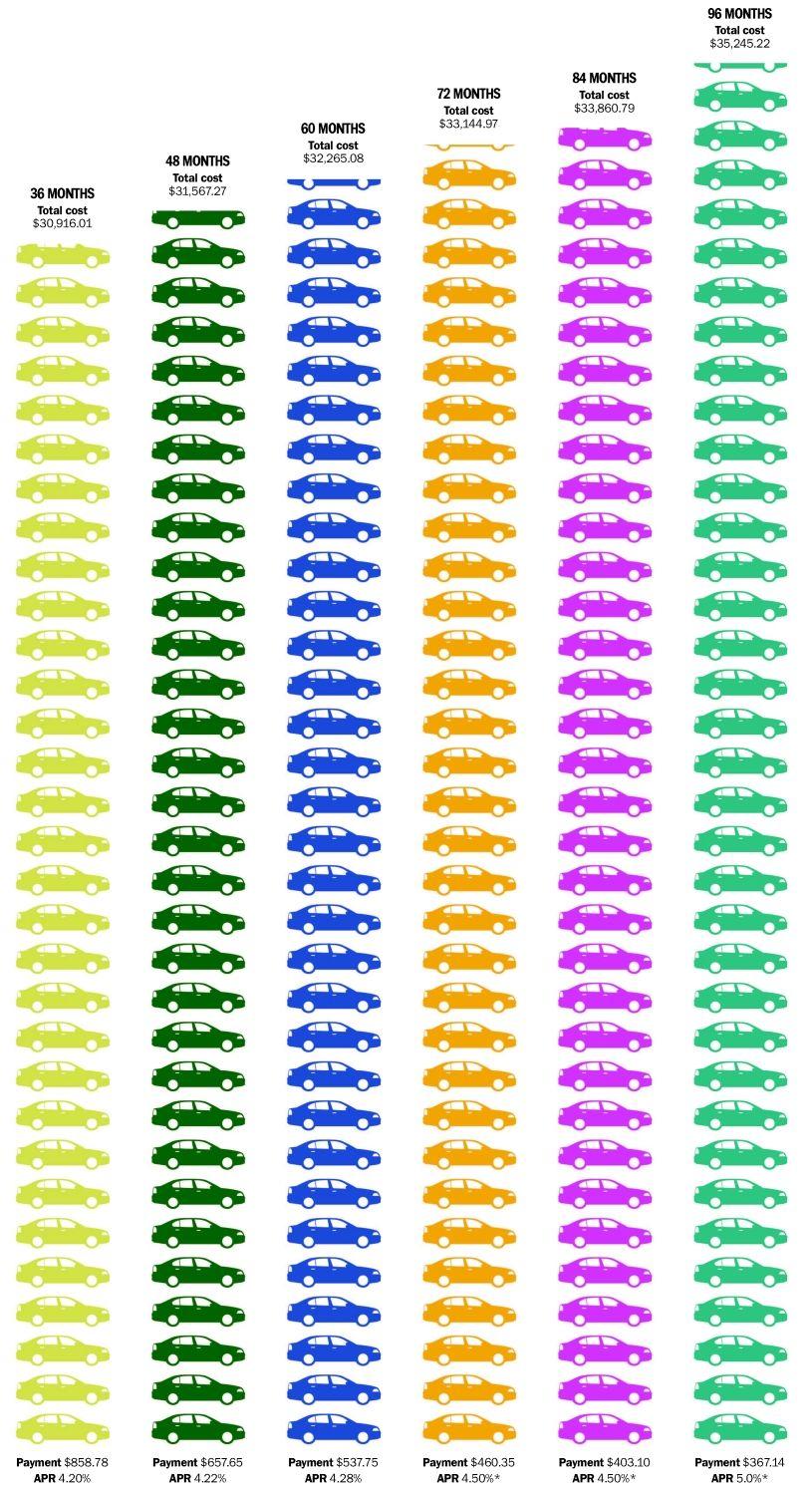 After a year of record new-vehicle sales, automakers, dealers, and the banks and finance companies that issue car loans are jubilantly exchanging high-fives.

New-car sales also are being driven by easy credit: Consumers, many with marginal credit ratings, are borrowing higher amounts and for longer loan terms than ever before as they try to keep monthly payments affordable. Experian, one of the three major credit bureaus, says that the average loan for a new vehicle in the third quarter was $28,936, up by more than $1,100 from a year earlier, and the average loan was for 67 months.

The loan chart above is based on a vehicle costing $29,000 and 100 percent financed with no down payment or taxes included. The interest rates are recent national averages; actual rates will vary.

** Estimates; BankRate doesn't track APRs for loans of this length

Steve Hinchcliff, president and chief executive of H&H Automotive in Omaha, said sixyear loan terms have been "the norm for well over 10 years." He said the "vast majority of new vehicle loans" at the auto group's Omaha-area dealerships are for six years.

Potentially millions of consumers will owe more than their vehicle is worth for years and will still be making payments after the warranties run out. When they get the new car itch again, they might have little or no equity in the vehicle they want to trade in.

Few within the auto or banking industries express concern about these trends, but others warn that loose credit that puts consumers in hock longer and for higher amounts could backfire in the future, especially if there is an economic downturn.

Among those waving a caution flag is Thomas J. Curry, comptroller of the currency, head of the federal agency that regulates banks. In an October speech to financial services executives, Curry warned that longer loans are "exposing lenders and investors to higher potential losses."

"Although delinquency and losses are currently low, it doesn't require great foresight to see that this may not last. How those auto loans, and especially the nonprime segment, will perform over their life is a matter of real concern to regulators. It should be a real concern to the industry," he said.

But the National Automobile Dealers Association told the New York Times last year that longer-term loans are reasonable because modern cars last longer. It's not unreasonable, then, to take out a loan with a longer repayment term than in the era in which cars didn't run for as many miles, some dealers contend.

Melinda Zabritski, senior director of automotive financial solutions for Experian, argues that delinquency rates on auto loans are lower now than before the recession.

"In today's market we're pretty much where we were back pre-recession. The level of subprime borrowing is even a little more conservative than it was pre-recession," Zabritski said, adding that most subprime customers pay on time. "Just because you're subprime doesn't mean you'll absolutely go delinquent."

Loans are getting longer because car shoppers are seeing higher sticker prices on new vehicles — and more are opting for high-end models loaded with expensive features.

"Because cars cost more, consumers need to finance more of the vehicle in order to make that purchase, and that drives the monthly payment up," Zabritski said.

"Most people who are buying a car are trying to negotiate monthly payments. If you can't put more money down, and you're increasingly having higher vehicle cost, the only way to keep that payment modest is to push out the term."

Greg McBride, chief financial analyst for Bankrate.com, said there is another way, but it's one that many consumers don't want to hear: Buy a cheaper car.

"If you're buying a new car and the loan goes beyond five years, you're buying too much car. On a used car, don't go beyond four years," McBride said, adding that too many consumers focus on the monthly payment instead of the total cost.

"That's detrimental to your financial health. It's financial engineering; the dealer can stretch out the loan term to squeeze that monthly payment into your budget. When people shop for a monthly payment, they're not focusing on the total cost," McBride said.

When payments are stretched out, he said, the vehicle's value can decline faster than the principal balance.

"Automobiles are depreciating assets, and the longer you stretch out that loan term, not only does that mean your interest (cost) grows, but you spend more time being upside down," he said.

The focus on monthly payments has also contributed to the growth in leasing, McBride said. Experian says that 27 percent of new vehicles were leased instead of purchased in 2015, up from 18 percent in 2010. A key reason is that the average lease payment last year was $398, compared with $482 for the average new-car payment. Another reason is that leasing is touted as a way to drive a more expensive car than a consumer could afford to buy.

"There's no free lunch; the trade-off is that at the end of the lease you don't own it. You hand the keys back and start all over," he said. "You don't get rich by driving expensive cars."

He offers this "tough love" advice:

"Look at the total cost. Don't look at what you can afford based on a monthly payment alone. Shop around for your financing because there's a vast disparity in rates available on loans. The best rates are below 2 percent, but you could easily pay 12 percent," he said. "And negotiate the price of the car separate from the financing."