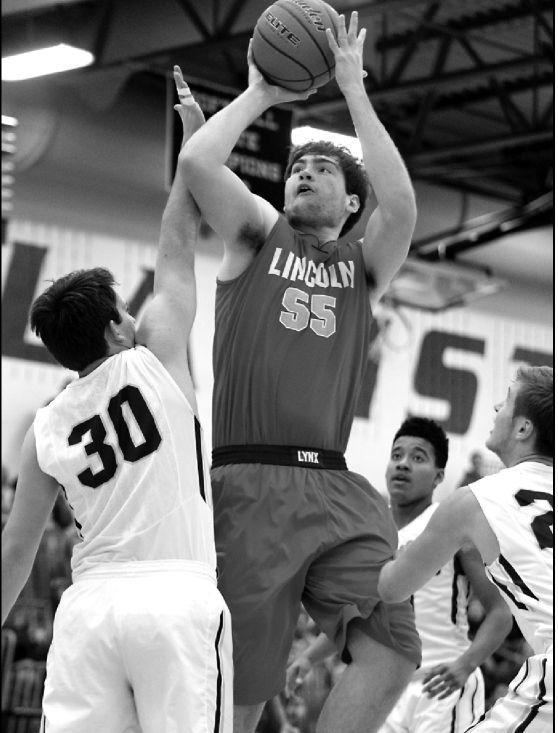 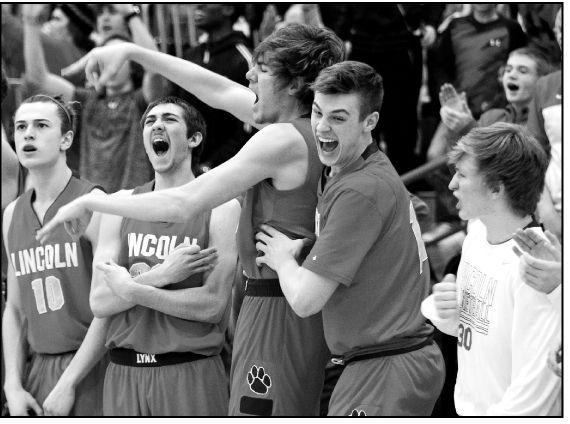 At right: The Lynx's bench celebrates a basket near the end of the game. Abraham Lincoln scored 28 points in the fourth quarter to rally for a victory. 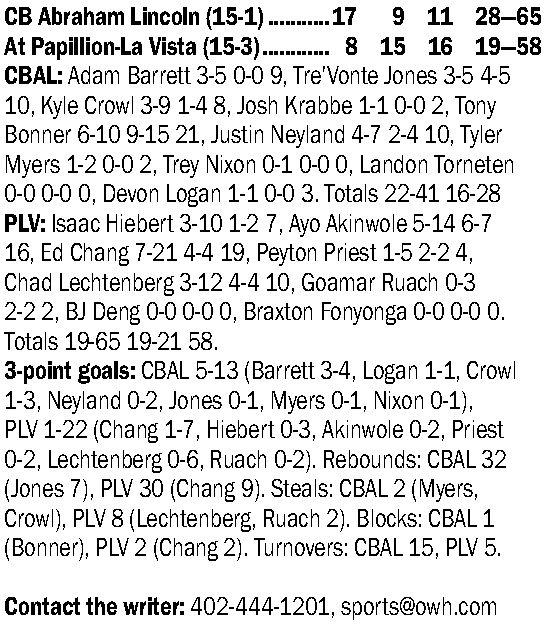 Basketball coaches love to put their players in big-game, high-pressure situations this time of year. It's a great primer for the postseason.

That was the thinking when Council Bluffs Abraham Lincoln scheduled Friday's game at Papillion-La Vista in a rare interstate battle. The Iowa Class 4-A No. 6 Lynx had yet to lose to a team from Iowa, and the Nebraska Top 10 No. 3 Monarchs entered as winners of eight of their last nine.

Experience paid off for the Lynx, who erased a nine-point third-quarter deficit by holding Papio without a field goal for more than seven minutes. That allowed Abraham Lincoln to turn a 38-29 deficit into an eight-point advantage midway through the fourth quarter as the Lynx pulled out a 65-58 victory.

"This was exactly what we were looking for," said Abraham Lincoln coach Jason Isaacson, whose team held the Monarchs without a field goal from the 2:41 mark of the third quarter until 3:20 remained. "We wanted to get tested, and we wanted the kids to be in that environment.

"Our kids are just tough. To be down in the last two, three minutes of that third quarter and in the fourth quarter, we started to get some stops and clicking offensively. It was a good test. Papio is obviously a great team. It's good to see where we're at."

The Lynx helped themselves in the fourth quarter by making 8 of 10 field goals and 10 of 15 free throws.

Tony Bonner also got going for Abraham Lincoln. After being held to three points in the first half, the 6-foot-8 post had 18 in the second to finish with a game-high 21 points.

"It's great for our confidence," he said. "We really wanted this one."

Equally beneficial for Abraham Lincoln was the Monarchs' cold shooting. Papio made 19 of 65 field goals (29 percent) and shot 1 of 22 on 3-pointers.

"Credit to them; we got a little tentative and took some bad shots to feed them back into it," Papillion-La Vista coach Dan Moore said. "But when we go 1 for 22 from 3s, that's a lack of focus. We shoot a lot of free throws when we're shooting it well. We're trying to drive it at them."

Papio's offense was at its best in the third. The Monarchs quickly wiped away a three-point halftime deficit with a 15-3 run to start the second half, giving Papio a 38-29 lead on an Ed Chang basket at the 2:41 left.

Then the Lynx seized control. Bonner, Kyle Crowl and Adam Barrett each scored as part of a 15-1 Abraham Lincoln run to give the Lynx a 44-39 lead with 5:55 remaining. Isaac Hiebert's basket at the 3:20 mark ended Papio's field-goal drought, making it 51-45, but the Monarchs could never get the deficit under four the rest of the way.

Isaacson said he was proud of his kids' maturity to not fold late in the game when they were down.

"They didn't start to panic or rush things," he said. "They just stuck to what they were doing and made a nice run to get back in it."

"It's disappointing," Moore said. "They played well, and their seniors did a nice job.

"Usually, if we get a six-point lead, we take care of the ball and control the game from that point on. We took some bad shots, our defense wasn't as good and they made some shots."

At right: The Lynx's bench celebrates a basket near the end of the game. Abraham Lincoln scored 28 points in the fourth quarter to rally for a victory.