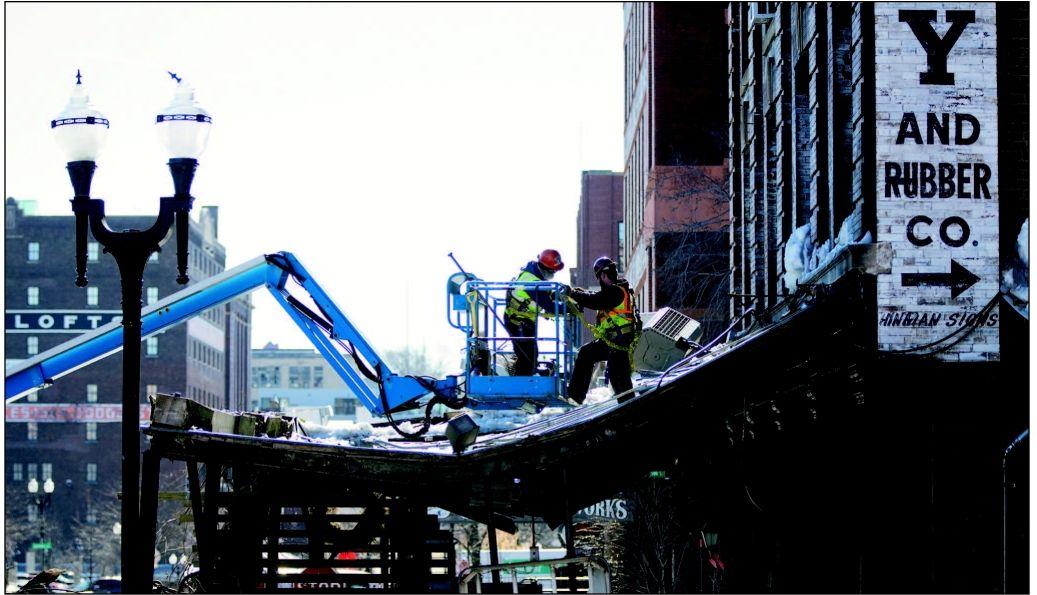 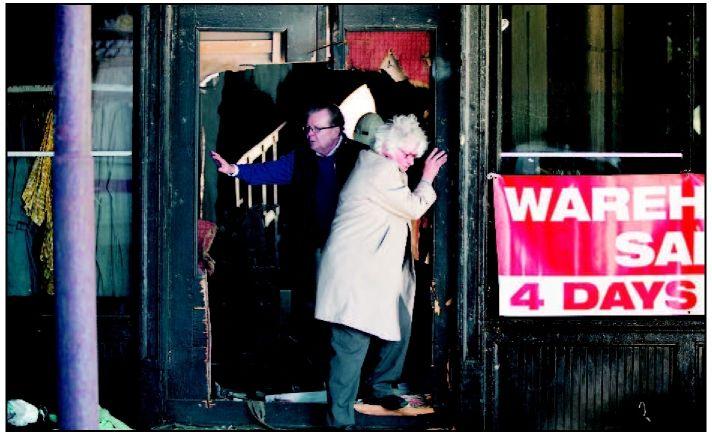 M's Pub building owner Mark Mercer on Wednesday exits the south door of the Nouvelle Eve boutique, which is in the same building. At top, workers prepare to remove a 45-foot section of the structure's awning.

The iconic awning at the fire-damaged M's Pub building is coming down.

The Omaha Mayor's Office said Mercer Management, which owns the building in the Old Market, hired Anderson Excavating to remove the awning.

Tanner Almery of Anderson Excavating, who was working on the site Wednesday, said the crew is trying to salvage architecturally significant items before taking apart the canopy that was damaged in the fire and the firefighting efforts.

Once the canopy is removed, workers can focus on the removal of the burned debris inside the building and see what can be salvaged.

The crew planned to remove the most damaged portion of the awning, a 45-foot section from the north end to the south. The rest of the canopy is fairly well-supported, he said.

Almery expects the removal of the canopy to take about two days.

Workers were able to salvage the M's Pub sign, some of the gas lights and the Nouvelle Eve boutique's sign.

They also will try to save the upright columns in front of the canopy. Those could be reused in any new construction.

"This thing's had its history here in Omaha," Almery said. "We'll try to salvage everything we can so we can preserve it and bring it back to its own, original life."

City officials have said the awning and the north wall are the two most unstable parts of the M's building, which was damaged in a Jan. 9 explosion and fire. Nouvelle Eve and five apartments also were destroyed; a building next door — housing condos and businesses — sustained water and smoke damage.

Omaha fire investigators determined that the fire resulted from a contractor working outside the building hitting a natural gas line.

Mark Mercer, head of family-owned Mercer Management, which developed most of the Old Market and owns the M's building, has said he wants to save the building, including the north wall, according to the city. The city says the north wall is structurally unsound.

Now, the city is waiting on a report from structural engineers hired by Mercer Management to decide how to move forward — whether to shore up the building, if necessary, or to demolish part of it.

In the meantime, the area around the building at 11th and Howard Streets remains closed to the public.

"This thing's had its history here in Omaha. We'll try to salvage everything we can so we can preserve it and bring it back to its own, original life." — Tanner Almery

M's Pub building owner Mark Mercer on Wednesday exits the south door of the Nouvelle Eve boutique, which is in the same building. At top, workers prepare to remove a 45-foot section of the structure's awning.