At the "Hands of Cooperation" camp, or Alta'awan, for Syrian refugees, children have little to do, as there are no schools or playgrounds. Instead, children are left to play with whatever they find and occupy themselves as they can. By some counts, half the people of Syria have fled their homes to escape violence. 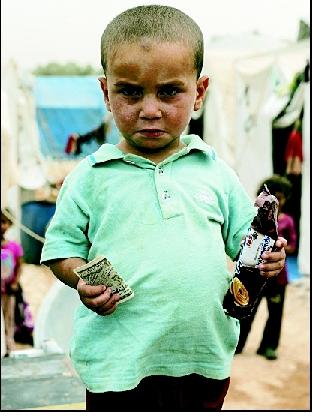 GAZIANTEP, Hirkey — It's the world's biggest humanitarian crisis, but no one in the international community has oversight or responsibility.

By some counts, half the people in Syria have fled their homes to escape the violence of a civil war that's lasted more than three years and has included aerial and artillery bombardment of many towns and villages. But there's no spokesman to call attention to their tragedy.

The little-known United Nations agency that's leading the crisis response has raised barely one-quarter of the money it needs to help refugees and the internally displaced, according to its website, while aid workers say that same agency, the Office for the Coordination of Humanitarian Affairs, is ill-equipped to deal with the crisis. Even the U.N.'s numbers on how many people need assistance, grim as they are, are in question; some advocates think the number is much higher than the U.N. says.

U.N. Secretary-General Ban Ki Moon has decried the "divisions in the international community and its immobility as a failure of the international responsibility to protect" civilians in war. But advocates say the U.N. has done little to revamp its operations since Ban spoke those words last September.

The United States and other leading powers continue to defer to the United Nations as the lead aid agency, even though its efforts to ensure humanitarian aid deliveries have proved to be ineffective. In the three months since the Security Council called for the combatants, in particular the Syrian government, to give "unhindered humanitarian access" there appears to have been little outreach into rebel-held areas. Only one U.N. aid convoy has crossed into the country from Hirkey, and that went to a government-held area.

Rebel advocates say the root of the humanitarian aid crisis lies in the refusal of the United States and its allies to provide rebels with air defense that would prevent the Syrian government from using its aircraft to destroy civilian neighborhoods in the conflict area. They cite, for example, the government's barrel bombing of Aleppo, Syria's biggest city, where the Assad government has dropped as many as 1,000 of the improvised explosive devices on rebel-held neighborhoods since December. That's led to the mass flight of residents and a surge in the growth of informal camps for the displaced just inside Syria along the Hirkish border.

"You have to get out," said Ahmed Asani, 48, who's from the rebel-held al-Marji district of Aleppo, who was interviewed while waiting for a bus in the nearby Turkish border town of Kilis. "If one doesn't crash on your house, it will on your neighbor's."

The U.N. aid coordination office, however, apparently has little to do with trying to assist the population of tens of thousands of displaced people. After visiting four camps, which varied in size from 650 to 4,000 people, McClatchy asked the agency for the full list of what the agency calls "spontaneous settlements," as well as the agency's assessment of what the needs are in those camps.

"The U.N. is not managing the spontaneous settlements, nor is there a list of camp managers," a spokeswoman, Amanda Pitt, said in an email. She suggested contacting the dozen or more national and international nongovernmental organizations that are engaged in cross-border assistance or the Red Crescent, the Islamic world's Red Cross, "to see what information they might be able to share."

The U.N. aid coordination agency's statistics on the size of the crisis are also in dispute. On May 10, the agency's director of operations, John Ging, said in Geneva that 6.5 million civilians had been displaced from their homes in Syria, the number the U.N. has cited since October.

"It's criminal" that the aid agency is still citing seven-month-old figures, said one aid official here. Like other staffers in the field who were critical of the U.N. and the U.S. government, this aid official is tethered to the system by the flow of funds and spoke only on the condition of anonymity.

"This is the only crisis that the U.N. is trying to shrink so that they don't get blamed," said another aid official, who also asked not to be named for fear of antagonizing his U.N. counterparts. He said that in other crises, the U.N. used worst-case figures in order to maximize its ability to raise money but that in this case it is reluctant to call attention to its failure.

The private aid officials said the biggest reason the U.N. aid agency seemed uninformed is that it wouldn't send staff or contract employees into rebel-held areas of the country. "They are not operational in Syria," said the second official.

The agency's explanation is that the U.N. "is not authorized to manage any IDP camps inside Syria," referring to internally displaced people. A spokesman said the Syrian government "has first responsibility" for aiding the internally displaced, an ironic assertion for those who blame the regime's bombing campaigns for the displacement problem.

"There is no spokesman for IDP issues as such," said Jens Laerke, the aid agency's Geneva spokesman. "And I'm afraid we will not comment on a situation we simply do not have direct access to or our own verified information."

The camps for internally displaced people inside the Syrian border illustrate the problem. Some 90,000 people were living in some 60 camps along the border in December, according to a Hirkish charity, IHH, but after the regime began barrel-bombing Aleppo, the number grew to 120,000 by late January. IHH, which delivers loaves of Syrian bread to the camps daily, said that there were 72 camps with 155,000 people by late February and that civilians were arriving at the rate of 1,000 a day.

Today, according to officials McClatchy consulted, the number is far higher. One official suggested it might be as many as 250,000. But the U.N. estimate, which the U.S. government routinely quotes in its official publications, is 140,000.

How that figure was arrived at remains unknown, making it difficult to know whether the international response is sufficient or falls woefully short.

"This is the only crisis that the U.N. is trying to shrink so that they don't get blamed."

An aid official, who asked not to be named for fear of antagonizing his U.N. counterparts

At the "Hands of Cooperation" camp, or Alta'awan, for Syrian refugees, children have little to do, as there are no schools or playgrounds. Instead, children are left to play with whatever they find and occupy themselves as they can. By some counts, half the people of Syria have fled their homes to escape violence.