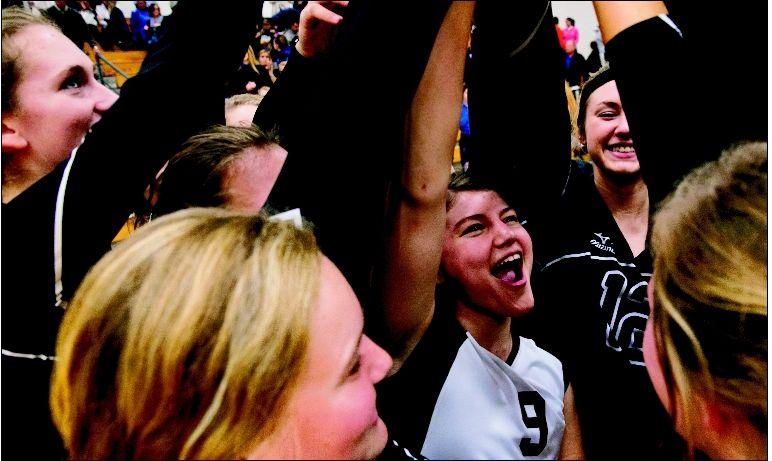 Papillion-La Vista's Ellie McDonnell, No. 9, and the rest of the Monarchs celebrate their victory against Omaha Marian in the Metro Conference final. 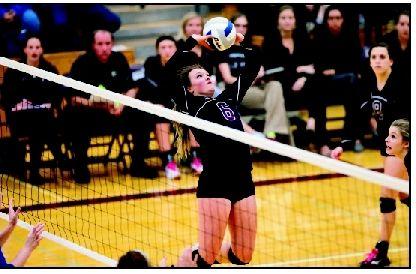 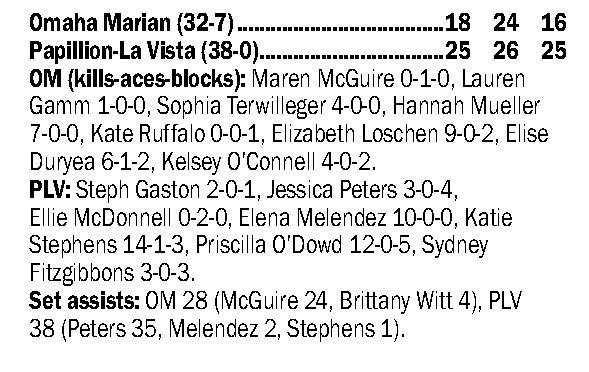 When you haven't lost a volleyball match all season, even a 10-point deficit somehow seems doable.

So it goes for top-ranked Papillion-La Vista, which swept third-ranked Omaha Marian on Thursday night to capture the Metro Conference title. The Monarchs moved to 38-0 with a 25-18, 26-24, 25-16 victory on their home court to win their first Metro crown since 2008.

That sweep didn't seem likely when the Crusaders sprinted to a 14-4 lead in the second set. But Papio fought back, eventually got it tied at 24 and then won the next two points to take a commanding 2-0 lead in the best-of-five match.

"We made a couple of adjustments, and that really helped," Monarchs coach Kristen Lebeda-Svehla said. "We talked about getting two points to their one."

Papio, which was facing the defending Class A state champion for the fifth time, pulled away late to win the first set. It was tied at 16 until the Monarchs went on a 9-2 run to the end, winning the set on a block by senior Priscilla O'Dowd.

That didn't faze the Crusaders, who came out strong in the second set. They led 6-1, 9-2 and 14-4 before Papio started its comeback.

Freshman Sydney Fitzgibbons began a 6-0 run with a kill as the Marian advantage shrunk to 14-10. The Crusaders still seemed to be in good shape later in the set when a kill by junior Hannah Mueller made it 20-15, but Papio once again fought back.

The Monarchs went on a 5-1 run and closed within 21-20 on a kill by senior setter Jessica Peters. Marian was able to push its lead to 24-21, but a Crusaders hitting error, a tandem block by O'Dowd and junior Katie Stephens and a kill by Stephens drew Papio even at 24.

Senior Elena Melendez then served out the set as Stephens had a block and a kill. She had five kills and three blocks in the set and had a hand in the Monarchs' final four points.

"When Katie had her hand on the ball, good things happened," Lebeda-Svehla said. "That got the momentum going for us, and we just kept it going."

The Monarchs held a slim lead through much of the third set, but a 6-2 run allowed them to open an 18-12 advantage. Marian couldn't get closer than four points the rest of the way, and Melendez finished off the match with a kill to cap the nine-point win.

It was the Monarchs' ninth Metro Conference volleyball title, tying them with Bellevue West for the most of any school. The Crusaders, who have won seven crowns, finished as the runners-up for the fifth straight year.

"The girls still have a big goal ahead of them," Lebeda-Svehla said. "There is a bigger picture, but they're not looking past our next match."

Stephens led Papio with 14 kills, while O'Dowd added 12 and Melendez 10. Peters had three kills and four blocks to go with her 35 assists.

"We always get pumped up when we play Marian," Peters said. "We know that we need to play our best against them."

The setter added that the team is working to focus on the now rather than what might be ahead.

"We're playing them one match at a time, one point at a time," she said. "That's what we need to do."

Elizabeth Loschen had nine kills, Mueller added seven and Elise Duryea chipped in six for the Crusaders (32-7). Their only losses have come against Papio (five) and second-ranked Lincoln Southeast (twice).

"It's tough playing them five times," said Lebeda-Svehla, a Marian graduate. "We know that every time we step on the court that we're going to get their best shot."

Both teams completed their regular seasons and will begin district play next week.

Papillion-La Vista's Ellie McDonnell, No. 9, and the rest of the Monarchs celebrate their victory against Omaha Marian in the Metro Conference final.