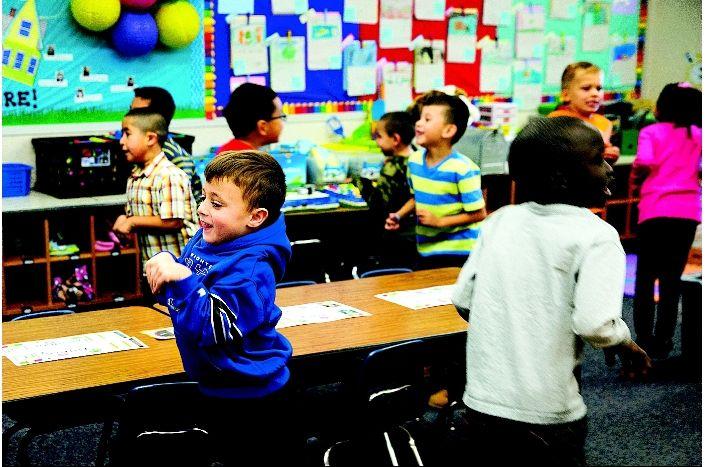 In the foreground, kindergartners Wesley Diaz, left, and Ruay Gatdit pretend to be kangaroos during a "brain break" at Gilder Elementary in Bellevue. As elementary schools increase the time pupils spend on math and reading, they get creative to give kids needed physical activity. 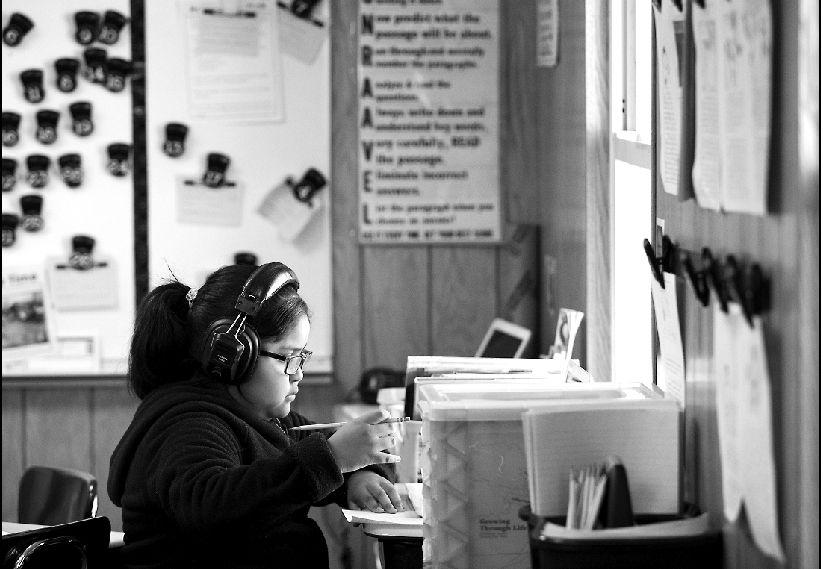 Denise Valdez is a fifth-grader at Gilder Elementary in Bellevue, where teachers are using short quick activities — "brain breaks" — to encourage movement and refresh thinking by students.

Between reading and writing one morning at the Omaha districts Gilder Elementary, kindergarten teacher Molly Belling turned on a boom box and got her students up to dance. • Then they played a game called "Move and Be," emulating some of the animals in the days storybook, Tommie de Paolo's "Mice Squeak, We Speak." • They stalked and roared like lions, bounced and hooted like monkeys and then wriggled back to their seats. • "They came in looking a little tired this morning," Belling said, "so I told Miss K (paraprofessional Paula Kastl) we need a movement game this morning."

Such short, quick activity breaks, known as "brain breaks" for their ability to get blood flowing and reset brains for the next round of learning, are one of the tools schools are using — along with walking clubs, and more in-class activity — to break up long class blocks and boost activity in schools.

For decades, recess was the break

time during the school day, the time for kids to play freely, socialize with friends, burn off excess energy and restore attention spans.

Recess still is happening. But that unfettered time on the playground has come under pressure in recent years as schools across the country have increased the amount of time devoted to math and reading instruction in the wake of No Child Left Behind. The federal law requires school districts to show increasing proficiency in those two key subjects or face consequences.

Other subjects, such as science and social studies, also have gotten a measurable squeeze. But the pressure on recess, as with physical education, comes at a time when health advocates from the White House down have focused attention on boosting physical activity and improving nutrition in an effort to combat childhood obesity.

Researchers also have pointed to recess's other benefits, including offering kids time of their own to rest, play and imagine as well as learn social skills. After such breaks, studies indicate, kids are more productive and attentive.

In 2012, the American Academy of Pediatrics concluded that "minimizing or eliminating recess may be counterproductive to academic achievement, as a growing body of evidence suggests that recess promotes not only physical health and social development but also cognitive performance."

That research comes on top of studies indicating that recess has been reduced since No Child Left Behind became law. One survey found that 20 percent of districts nationwide had reduced recess by an average of 50 minutes a week.

Locally, it's difficult to tell whether recess has increased or decreased, although the time kids get now probably won't hold up to many parents' memories of enough time for a game of kickball and a quick round of tag.

Ken Finch of the Omaha-based Green Hearts Institute for Nature in Childhood, which advocates for unstructured outdoor play, said he doesn't believe recess has taken the hit locally that it has in some parts of the country.

Both Nebraska and Iowa leave such decisions to local districts, and neither state tracks recess. The Nebraska Department of Education's "suggested" weekly schedule doesn't specify a time block for recess but recommends that it be included in daily schedules.

In the metro area, some area school districts leave recess to individual buildings while others provide guidelines.

The Papillion-La Vista district now specifies that all kids in kindergarten through sixth grade have one 15-minute large group recess. Students in kindergarten through second grade also get a second opportunity for movement, whether it be recess, brain breaks or a walk around the building. Those in grades three through six may get a second opportunity, at teachers' discretion.

Depending on the building, the guidelines might represent an increase, a decrease or no change in active time, said Deb Rodenburg, director of elementary curriculum.

Previously, the district had offered two opportunities for movement, but some principals might not have interpreted it that way, she said. Schools that were doing better academically had a little more flexibility.

Schools, Rodenburg said, face the same dilemmas as families in deciding how to prioritize their time. "Right now, the priority tends to be high academic standards, so that's where you put your focus," she said. "That's what's valued by communities, families and businesses."

Lincoln Public Schools went through a review several years ago. The district long had recommended at least two breaks a day. But sometimes the second one got lost, said Cindy Schwaninger, director of elementary education. Now all elementaries have at least one 15-minute recess and most also have a second break.

"It's a balance to honor those brain breaks and recess but also to have sufficient instruction in math and reading so students are proficient," she said.

The Lincoln district, like many in the metro area, also stresses sending kids out before lunch when schedules allow. That way, Schwaninger said, kids go to lunch with their metabolisms ramped up, ready to eat a good meal and drink their milk, rather than rushing through lunch to get to recess.

The Omaha Public Schools this year significantly boosted the time elementary students spend on math. Under that schedule, OPS allocated 15 minutes for recess in kindergarten through second grade as well as a lunch recess.

Students in third through sixth grade get a lunch recess. District officials also encouraged teachers to provide "brain breaks" throughout the day.

Cassie Schmidt, Gilder's principal, said the schedule isn't a new one for the school, situated along Chandler Road in Bellevue.

In the 2009-10 school year, just 36 percent of students were proficient in reading. Thirty-eight percent met that mark for math when first tested in 2010-11.

"We had to really intensify instruction," she said. "But we knew movement was important."

So three years ago, the school sent staff for training in a system intended to increase student engagement. Instead of sitting in rows, kids sit in small groups and frequently turn to each other in activities that involve coaching and problem-solving, like teams in a workplace. Instead of one student raising a hand and answering a question, she said, at least half of the students in a class are actively participating at any given time.

Last year, 78 percent of Gilder's students were proficient in reading and 72 percent met the mark in math. The little school outperformed the Omaha district's average scores for reading and math, showed growth across all grades where it was measured and met federal targets for all but special education students. Nearly 85 percent of students currently qualify for free or reduced-price meals and 30 percent are learning English.

At the same time, the school also integrated "Silly Sports and Goofy Games," a book of 200 games and activities such as "Move and Be" that get kids up and moving, laughing and smiling.

Students still have recess, she said. But teachers also work in two to five such activities a day. Many, as in Belling's class, are tied to lessons.

Between the breaks, the added interaction among students and rotation among learning centers, students are moving all day long, she said. The activities and games, which include teachers, also help build camaraderie.

"The thing I love," Schmidt said, "is kids end up socializing with kids they wouldn't normally play with at recess."

Papillion-La Vista's Rodenburg said a lot of the social skills kids once picked up on the playground now are modeled in the classroom.

"We don't sit in rows anymore and work in isolation," she said.

Several researchers and educators, however, agreed that recess, unlike P.E. and brain breaks, offers valuable unstructured physical activity and play. The pediatrics academy also has supported free play as a "fundamental component" of a child's growth and development.

Lacey Merica, a member of the Omaha school board, said she has heard concerns from some teachers who feel like they have less unstructured recess time.

The subject likely will come up as OPS works through the objectives of its strategic plan. Those discussions probably will include the fact that district students, particularly at the elementary level, spend less time in school than those in most neighboring districts.

"In the end, it's a give and take situation that we have to work out," she said. "We're expecting our students to learn more than we ever did before."

• Council Bluffs: Increased math time by 15 minutes this year. Allots 25 minutes for recess every day but Monday, when it dismisses early.

• Westside: All students have one scheduled recess. Primary grades also get a second one.

• Millard: Lunch recess of 15 to 20 minutes for all elementary grades. Primary grades have an additional recess.

Schools are branching out in their efforts to add more activity to the school day.

The Norris School District in Firth, Nebraska, has developed a number of programs in addition to brain breaks to get kids moving.

Melissa Wesch, a part-time P.E. teacher at the district's intermediate building, last year began organizing intramural games during recess. They're optional, so kids get to choose whether to participate.

Games change four times a year for the third-, fourth-and fifth-graders. Currently, they're playing an adaptation of Quidditch, the fictional game played at Hogwarts in the Harry Potter series. It has been popular, with 330 kids on team rosters this quarter.

Norris middle school students — grades 6, 7 and 8 — get a 20-minute midmorning break called Jumpstart, which includes an opportunity for a grab-and-go breakfast and activity, either outside on the playground or in the gym. Students also get a short lunch recess. Some of the activities at other schools:

• Elkhorn and Papillion-La Vista host walking clubs before school at all elementary buildings. They're offered at various buildings in the Millard, Omaha and Council Bluffs districts.

• Lincoln has walking tracks at more than half its elementary buildings.

• Many schools use a variety of activities and materials for brain breaks, such as dance videos and Wii Fit activities. Forty-seven districts in nine counties in eastern Nebraska and western Iowa use GoNoodle, an online resource for elementary teachers offered free to schools through the support of Children's Hospital & Medical Center.

"It's a balance to honor those brain breaks and recess but also to have sufficient instruction in math and reading so students are proficient."

In the foreground, kindergartners Wesley Diaz, left, and Ruay Gatdit pretend to be kangaroos during a "brain break" at Gilder Elementary in Bellevue. As elementary schools increase the time pupils spend on math and reading, they get creative to give kids needed physical activity.

Denise Valdez is a fifth-grader at Gilder Elementary in Bellevue, where teachers are using short quick activities — "brain breaks" — to encourage movement and refresh thinking by students.