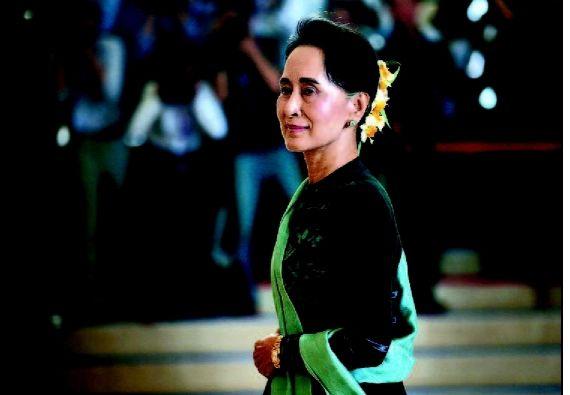 No. 3: Aung San Suu Kyi, leader of the National League for Democracy in Myanmar

Fortune magazine released its third annual list of the World's Greatest Leaders last week, and the list of 50 CEOs, heads of state, activists and other leaders is nearly half women — there are 23 this year, compared with 15 last year and 19 in 2014.

German Chancellor Angela Merkel is No. 2 in the rankings, followed by Aung San Suu Kyi, the leader of the National League for Democracy in Myanmar. Three other women made the top 10, including Christiana Figueres, the executive secretary for the U.N. Framework Convention on Climate Change (No. 7), Supreme Court Justice Ruth Bader Ginsburg (No. 9) and Sheikh Hasina, the prime minister of Bangladesh (No. 10).

While the magazine doesn't offer an explanation for the growth in women on the list other than to note "there's a noticeable groundswell behind women fighting to advance other women," the women on the list come from many fields, including social activism (Black Lives Matter co-founders Alicia Garza, Patrisse Cullors and Opal Tometi at No. 27), the military (U.S. Army Rangers Kristen Griest and Shaye Haver at No. 34) and the foundation world (Melinda Gates and Gates Foundation CEO Sue Desmond-Hellman at No. 41).

One notable woman missing from the list is Hillary Clinton, the Democratic front-runner in the 2016 presidential race. Then again, also missing are her fellow candidates.

"That's not an accident," wrote Fortune Editor Alan Murray. "The U.S. political system is broken, and we see little reason to think the current contenders can fix it."

There are, however, more U.S. elected officials than there have been in the past, from Govs. Nikki Haley of South Carolina (No. 17) and Gina Raimondo of Rhode Island (No. 38) to Speaker of the House Paul Ryan of Wisconsin (No. 8). "While unyielding in their competing worldviews," Murray wrote of Ryan and Justice Ginsburg, "they each have that key quality of empathy essential for today's challenges."

And what about the business leaders? This year's No. 1 is Jeff Bezos, founder and CEO of Amazon, who also owns the Washington Post.

Fortune's Adam Lashinsky writes not only about Bezos' success at Amazon, but also how as the owner of the Post and a financier of space projects, he's taking on a broader leadership role.

No. 3: Aung San Suu Kyi, leader of the National League for Democracy in Myanmar