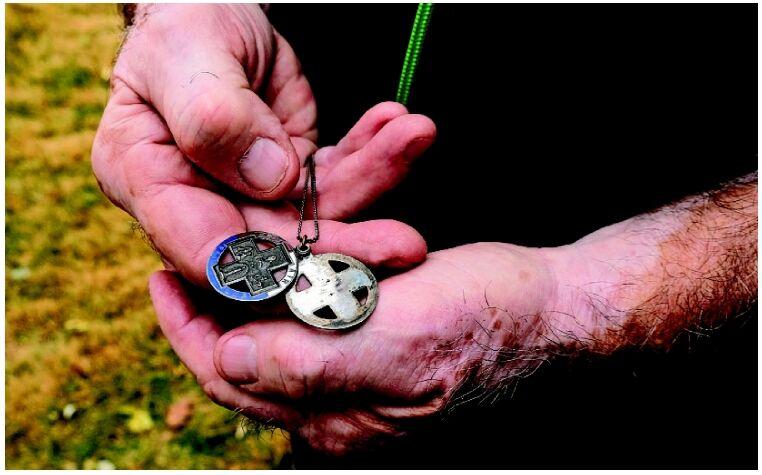 Omahan Tom Sharon, a Navy corpsman on medevac helicopter flights during the Vietnam War, shows a St. Christopher medal that a mortally wounded helicopter co-pilot pressed into his hands on Sharon's first mission. "I never wore it. ... It's mine to hold. It doesn't belong to me, so to speak." 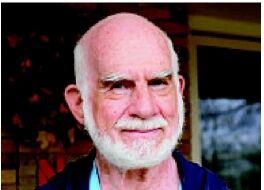 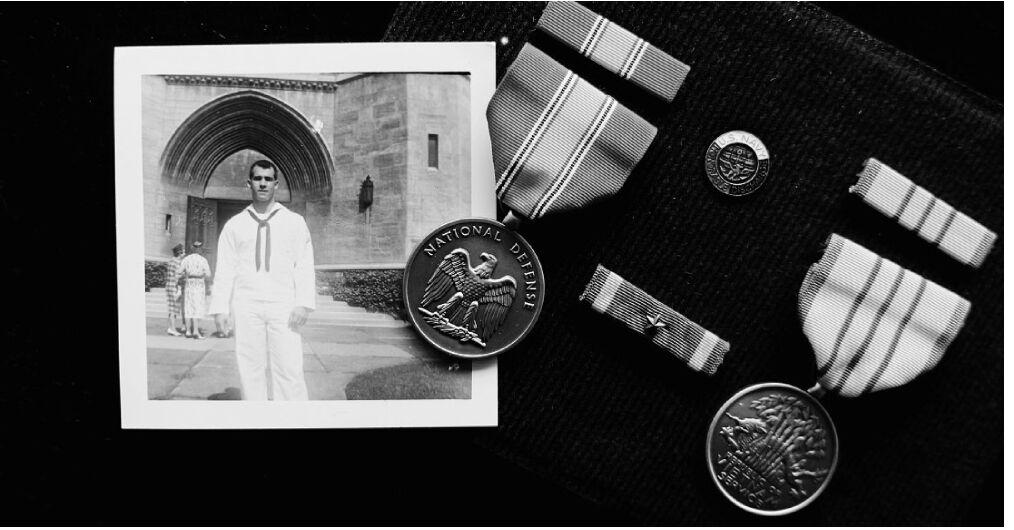 Tom Sharon just before his discharge from the Navy in 1968, and his National Defense and republic of vietnam Service medals, Navy Honorable Discharge lapel pin and Navy Unit Commendation medal.

National politics and anti-war sentiment stood in the way of a heroes' welcome for many returning home from the VietnamWar.

Navy Corpsman Tom Sharon had a firsthand experience in San Francisco in September 1967.

He was just back from Vietnam after a year of treating war casualties. Philadelphia was his next stop for a three-month naval hospital assignment before discharge. As he and other uniformed comrades made their way to the ticket counter at the San Francisco airport, people in the terminal jeered at them.

"They had a different attitude, a hatred for war, and everyone connected to it," Sharon said. "I bought my $64 ticket, then I changed into civilian clothes to avoid the ridicule."

A half-century has eased the sting. "Vietnamwas a critical time period, especially at home," he said. "I hold nothing against those who protested. Wars don't end up proving anything."

The Detroit native served with Surgical Evac Team #1, which was attached to the 3rd Marine Division in Vietnam. The treatment of more than 3,300 casualties at naval hospitals and in the field with medevac helicopter crews would earn the corpsman and his comrades a Navy Unit Commendation medal.

"We went wherever things got out of hand," the Omahan said. "If we didn't get to them, they were brought to us, wherever we happened to be."

A lot ofmedevac helicopter runs were from combat areas to helicopter carrier ships at sea. Some companies had particularly heavy casualties, 73 dead in a half day in one conflict.

"We discovered in short order that if a body stayed in the field too long, the Viet Cong would have a chance to rig it with an explosive booby trap," the veteran said.

He and his unit were assigned to a helicopter carrier the day Company C's many casualties were brought in from the field. Fog kept the ship from transferring the dead to the main mortuary at Tan Son Nhut Air Base in Saigon for almost three days. There were so many body bags, the ship's mortuary couldn't hold them all, so the ship's kitchen coolers were used.

"That was hard," Sharon said, knowing that the soldiers had not been identified and their families didn't know of their loss.

He was a pre-med student at Kent State University in Ohio when he enlisted on Jan. 8, 1964."I wanted a choice of branch and field of service."

After Navy boot camp and advanced training, Sharon was assigned to Pensacola Naval Air Station in Florida in March 1966. Four months later, he got orders to report to the naval base in San Diego in preparation for deployment to Vietnam.

His tour of duty with the Surgical Evac Team started in September on the helicopter carrier USS Iwo Jima, where he was an operating room technician. After six months, his company was reassigned to the naval hospital at Da Nang and a medical station in Phu Bai. Sharon also served with a medevac helicopter crew, rendering aid to Navy and Marine units in the field.

On his first combat support mission, the medevac helicopter took fire from the ground, and bullets shot up through the floor. One of the rounds hit the co-pilot in the neck. The pilot in the right-hand seat motioned for help, and the corpsman's training kicked in.

"I stuck my fingers in the co-pilot's wound," in an attempt to stop the bleeding. "But the wound was so bad … he ultimately bled to death in my arms."

As he sat mortally wounded, the co-pilot reached for the St. Christopher medallion he wore around his neck.

"He yanked it off and pressed it into my hands," Sharon said.

Later, when the blood on the corpsman's hand dried, there was a perfect imprint of the cross from the medallion.

It's mine to hold. It doesn't belong to me, so to speak," Sharon said.

In that awful moment, the 19-year-old told himself, " 'It's going to be a really long year.' And that's pretty much how it went."

It took him a while to get past that first casualty.

"I didn't know his name," Sharon said. "I can see his face — a lot of faces, but I never knew their names. I only knew the names of the guys I worked with."

That was the nature of combat medicine.

His biggest combat scare, he said, came while on patrol with a Marine squad in the Marble Mountains. The unit came under fire, and a Marine pushed Sharon out of the way of an incoming rocket-propelled grenade.

"In the second that the Marine took to saveme, he lost a leg. I held off the bleeding long enough for us to get him out" of the field. "You do what you have to do. There were days that were worse and days that were better."

A good day was providing medical care to children and other civilians in the Vietnamese villages.

"You relied on each other," he said of the bond between comrades. He worked with three "outstanding" surgeons from California. "They were in their 30s and 40s; they all had families and gave up practices to serve."

According to the U.S. Navy Bureau of Medicine and Surgery, more than 10,000 Navy corpsmen served with the Marines during Vietnam. Of those, 645 were killed in action.

"Dad was a Navy pilot in World War II, and we'd talk about his experiences every now and then," Sharon said. "When I returned home, he asked about Vietnam. So I told him. It was never discussed again. Our experiences were vastly different."

After his discharge, he went to work at a hospital in Cleveland. He moved to Omaha in 1987 as a supervising cardiovascular perfusionist at Methodist Hospital. He retired from that career in 2004.

Sharon is twice divorced, with five children and 13 grandchildren.

He's close to a son and daughter from his first marriage to a WAVE nurse; he met her at the naval hospital in Pensacola. They were married in March 1966.

When Sharon returned home, he slept on the floor for about a year.

The marriage lasted about five years. Their children were ages 4 and 1 at the time.

A second marriage in 1974 ended in 2010. He is estranged from the three children from that marriage.

Sharon is among an estimated 30% of Vietnam veterans who have post-traumatic stress disorder.

For years and years, he was in denial.

"One thing about PTSD, you can't dismiss it," the vet said. "It's a matter of adapting."

A flashback in the early 1990s, triggered in part by the oranges and reds of a setting sun and the bright lights of a high school football stadium, led to his PTSD diagnosis and three years of counseling at the VA Hospital.

"Everything about my postwar life up to that point had been very, very hard and frustrating, but I had always kept it in," he said.

"At that moment, I lost track of where I was," he said of the stadium incident. He was back in Vietnam, under a rocket attack. "Two of my children were at the game with me. The only person who wasn't there was 'me.' "

Sharon is grateful for the counselors, including a pastor, who helped him get beyond the incident.

"War isn't the glory the movies play it up to be," he said. "All vets deserve praise for their sacrifice."

His has been a lifetime of saving lives, first in Vietnam, then in hospitals at home.

"It always seemed like I did my best work when things were the worst," he said. "That's the positive thing out of Vietnam, I guess. Crisis is not standing in my way. Some people could do it; some people couldn't." chris.christen@owh.com, 402-444-1094

Omahan Tom Sharon, a Navy corpsman on medevac helicopter flights during the Vietnam War, shows a St. Christopher medal that a mortally wounded helicopter co-pilot pressed into his hands on Sharon's first mission. "I never wore it. ... It's mine to hold. It doesn't belong to me, so to speak."

Tom Sharon just before his discharge from the Navy in 1968, and his National Defense and republic of vietnam Service medals, Navy Honorable Discharge lapel pin and Navy Unit Commendation medal.