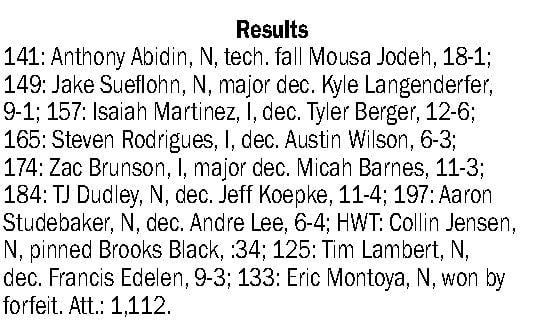 LINCOLN — Nebraska, ranked 11th nationally, snapped a three-dual losing streak with a 30-10 victory over No. 13 Illinois Friday night at the Devaney Center.

The Illini took a brief 10-9 lead midway through the dual before the Huskers won the last five matches. Nebraska earned bonus points with four of its seven victories on the night.

The Huskers had lost their previous duals to No. 1 Penn State, No. 2 Iowa and No. 9 Ohio State.

Nebraska opened Friday's dual with bonus-point wins from seniors Anthony Abidin (141 pounds) and 149-pounder Jake Sueflohn. Abidin earned an 18-1 technical fall in his win, while fifth-ranked Sueflohn improved to 22-4 this season with a 9-1 win over Kyle Langenderfer.

Illinois, which boasts four wrestlers ranked in the top six in their respective weight classes, then won the next three matches for the 10-9 lead.

Isaiah Martinez, the defending national champion at 157, opened an early 6-2 lead on his way to a 12-6 win over Tyler Berger. Steven Rodrigues, ranked sixth at 165, led NU's Austin Wilson 6-2 after two periods before closing out a 6-3 win, and then Zac Brunson, ranked fourth at 174, pulled away late for an 11-3 major decision over Micah Barnes.

The rest of the night, though, belonged to the Huskers.

TJ Dudley, ranked 10th at 184, bolted to a 6-0 first-period lead on his way to an 11-4 win over Jeff Koepke. At 197, NU's Aaron Studebaker trailed 4-3 after two periods before rallying for a 6-4 win over Andre Lee. Heavyweight Collin Jensen then pinned Brooks Black 34 seconds into their match — it was Jensen's sixth pin this season.

At 125, Tim Lambert improved to 19-5 as he led throughout in a 9-3 win over Francis Edelen. That secured the dual win for Nebraska, so Illinois forfeited the final match at 133 — the Illini's wrestler at 133 is unbeaten Zane Richards.

Nebraska returns to action at 7 p.m. Saturday against North Carolina State, which is 20-0 in duals this season and ranked third nationally.

HICKMAN, Neb. — Third-ranked Gretna finished off a season sweep of the Eastern Midlands Conference with a team title at the individual tournament Friday night at Norris.

The Dragons crowned four champions and had six other finalists in holding off new No. 1 Plattsmouth by eight points. Gretna also won the dual tournament in early January.

Top-ranked Logan Radik's second-period pin in the final at 220 pounds put his team ahead for good. Trevor Fauver (106), Kobe Everson (152) and Josh Gasper (195) also won titles for the Dragons.

Plattsmouth was elevated to the top spot in the ratings after winning Omaha Skutt's tournament last weekend.

The Blue Devils finished with 200 points, well ahead of third place Bennington, which is ranked fourth. Andrew Nielsen won at 113 pounds, Justin Williamson came out on top in sudden victory for the 126-pound crown, second-ranked Zach Prall won at 145 and No. 1s Andrew Null and Gage Orton earned major decisions at 160 and 170, respectively.

Bennington had a pair of champions in Jake Cluxton (132) and Josh Velasquez (138). Fourth-ranked Jordan Moyer of Nebraska City won at 120, beating two wrestlers ahead of him in the ratings. Norris' No. 6 Gavin Eason upset third-ranked Grant Bruner of Gretna for the 182-pound title.

Waverly's Justin Hennessy, ranked second in Class B, pinned Class A No. 1 Shane Henderson of Elkhorn South in the second period to take the heavyweight championship.