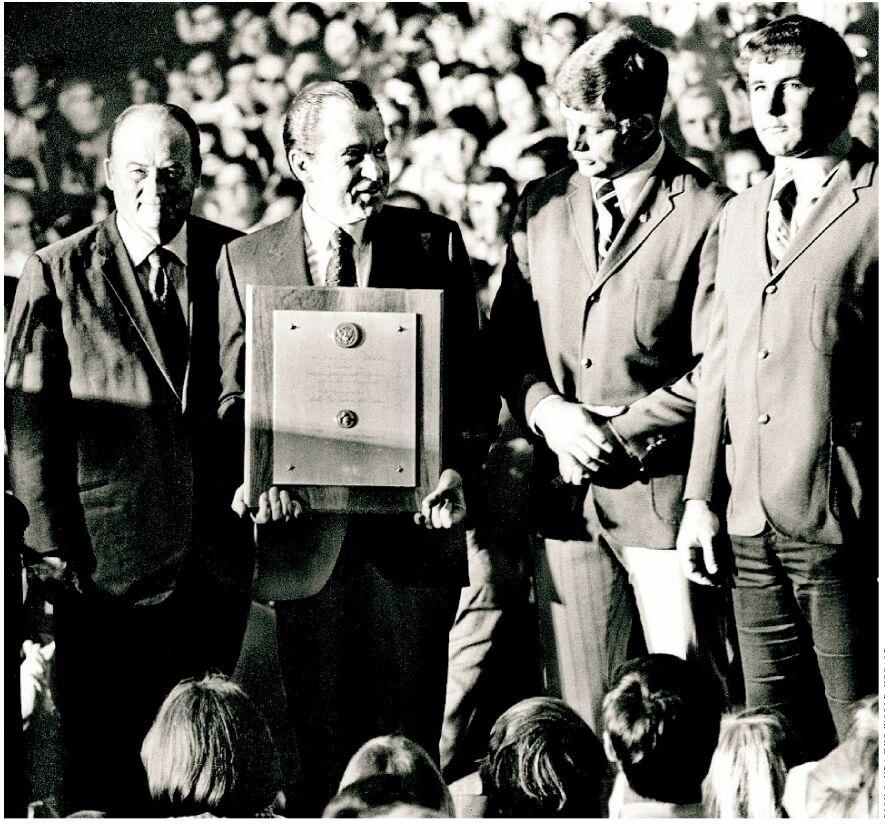 This entire journey started on a bus.

It was late in the afternoon on Jan. 1, 1971. The Nebraska Cornhuskers stepped on a bus inMiami and headed for the Orange Bowl and a whole lot more.

The team was headed to the old relic stadium to put the exclamation mark on a season of redemption. Bob Devaney's program had slipped in recent years. Missed bowl games in 1967 and 1968. There was a petition in Omaha to boot the legend.

This team was Devaney's emphatic answer. It rebounded in 1969, got a share of the Big Eight title, found the sun again in El Paso, Texas, pounding Georgia in the Sun Bowl.

But 1970 was when the Huskers climbed all the way back up. Undisputed Big Eight champs. Back in the Orange Bowl, back on New Year's Day for the first time in four years.

These were the goals for Nebraska in 1970.

But on the way to the Orange Bowl, they turned and took a new road.

Back then, the Orange Bowl was the New Year's nightcap. The other bowls were done.

There were no cellphones or "College GameDay." The day's results were spread on the bus, seat by seat.

Hey, did you hear? Notre Dame and Joe Theismann upset No. 1 Texas in the Cotton Bowl.

What's that? Jim Plunkett and Stanford were giving No. 2 Ohio State all it could handle and more in Pasadena?

Holy New Tradition. Opportunity was about to fall out of the sky and land smack on the bus of the third-ranked team in the nation.

Beat LSU and it appeared Nebraska would be No. 1.

"We're on the bus and Eddie Periard starts getting loud," Murtaugh said of the former middle guard.

"We're going slow, stuck in traffic and he's yelling, 'Letme out! Let me out! I got to get to the stadium and play now!'"

Fifty years later, the years of five Nebraska national championships are stamped on the giant video board at Memorial Stadium.

Fifty years later, the national championship is still the Holy Grail that coaches and young men pursue in Lincoln.

It all started with this amazing collection of legends who became the first men on the moon.

They are a group worth knowing and a special season worth revisiting. From now through the first week of January, The World-Herald will highlight the men, the games and the stories of that 1970 season.

They were the First Champions. But as the years have passed, their memory has fallen through the cracks of Husker history.

The 1970 Huskers? Didn't they beat LSU or somebody?

These legends were the rocks of Devaney's Comeback Tour. Their nucleus would win a Heisman Trophy and two Outlands, but not that year. There would be eight All-Americans but most would be immortalized the following season, on a gray ThanksgivingDay in Oklahoma.

The 1970 Huskers didn't have a Game of the Century. Didn't have recent memory on their side. They were never hyped or expected to become legends.

It all came together late, in a way that perhaps surprised even them. Consider, before the LSU game, Devaney was subdued, maybe stunned by his team's position.

"Bob said something like, 'Well, we got a shot,' " former NU receiver Guy Ingles said.

Said Murtaugh: "We weren't even thinking about it. The possibilities were so minute."

I had lunch recently with Ingles and Murtaugh, two old friends and teammates. They are more than happy to share their tales with anyone who wants to listen.

Indeed, the '90s Huskers have their share of radio shows in the state. Murtaugh and Ingles have their own version, Saturday mornings on ESPN 590.

It's a cool connection back to a historic year, maybe the last year before the national championship was not part of the state's vernacular.

So nobody in 1970 was predicting a national title. Well, almost nobody.

"Coming out of the spring, I looked around at all the talent and said, 'We have a hell of a team,'" Murtaugh said.

"Fall camp, we show up and there's all these reporters. They asked me how we're going to do, and I said, 'We're going to beat the crap out of everybody.'

"Well, that got around. (Jerry) Tagge pulled me aside and said, 'Devaney says to shut up. Everybody's going to have an X on our backs.' "

Murtaugh would find out how correct he was during the second week. A trip to Los Angeles to face No. 3 USC.

The No. 9 Huskers were underdogs but dominated everything but the scoreboard. NU led the game three times but with six turnovers, let the Trojans come back and forge a 21-21 tie.

That was no consolation for Murtaugh, who had one of his best games (14 unassisted tackles, 11 assists) against coach John McKay's offense. But a prize of sorts would arrive afterward.

"I'm in the locker room after the game, not happy," Murtaugh said. "The trainer comes up and says, 'There's two Southern Cal players outside who want to talk to you.'

Not exactly. It was a pair of stars, middle linebacker Greg Slough and running back Clarence Davis, armed with compliments.

Murtaugh recalled, "They said, 'We want to shake your hand. You guys have a great football team. We should have never been in the game, we were lucky. You go tell the players how great they are.'"

They could take that validation and satisfaction home on the threehour plane ride. One that Ingles won't forget.

"I remember looking at the (USC) defensive huddle and thinking, 'Those guys are bigger than anybody I've ever seen in my life,' " Ingles said.

"I ran an out pattern and came back to get it on the hash, andGreg Slough comes over from middle linebacker and cracks two of my ribs. I caught a touchdown pass a few plays later. Then someone comes up and says, 'Great job,' and slaps me on the back.

"That hurt like hell. The plane ride home was a pain in the butt."

The bruising wasn't over. The Huskers would win the next 10 games, some with ease. Murtaugh and Ingles said the toughest test came Oct. 10 against Missouri.

Nebraska won the rock fight 217. Murtaugh had an interception while Jeff Kinney rumbled for 108 yards and recovered a key fumble while on the punt team.

But that game was known for a trend that had become a staple of that 1970 season. The Huskers used two quarterbacks, Tagge (the better passer) and Van Brownson (the better runner). And it was no controversy.

"It was as close as you could get," Ingles said. "Tagge would start the game and if he wasn't having a good game, Van would come in. And the next week, Van would start and I swear, the reverse would happen. Jerry would bail him out.

"The locker room was fine. You know that quote, 'If you have two quarterbacks, you don't have one?' That wasn't the case here. They both played and won 21 games between them, two Big Eight titles and a national title."

Murtaugh cracked: "I didn't like any of the quarterbacks. Or tight ends, receivers or running backs. But I was a defensive guy."

This was a dynasty growing by the week. The second year of offensive coordinator TomOsborne's move to the I-formation, an offense that used some spread and option and power with the fullback.

"They ran that 'iso' play over and over," Murtaugh said. "(Fullback Dan) Schneiss and I butted heads for four years. I got real tired of seeing him."

But Murtaugh was only too happy to share the stage with Schneiss and Devaney when President Richard Nixon came to Lincoln for a national title celebration at NU Coliseum.

"They (secret service) told us not to say a word," Murtaugh said. "They said, 'You will not approach (Nixon). Stand there and if he turns to you, that's OK. Do not shake his hand unless he puts it out.'

"We were like, 'Well, OK.' But (Nixon) was very nice about it, shaking hands, saying congratulations. He said, 'I know about you' — Schneiss and I."

Little did anyone know then that such celebrations would become tradition. So would hopes, expectations, the chase.

The 1970 Huskers started it all. They were the first. They deserve to be remembered. Remember them for that.

Because of the pandemic and postponement of the 2020 season, the 1970 team won't get their reunion and moment at a Nebraska football game. That has been postponed until 2021. The 1970 team will have to share the stage with the '71 Huskers.

That's OK, Ingles said. Because every once in a while, someone remembers. Like last year, when Ingles met NU safety Lamar Jackson and he said, "You guys were national champs."

"I'm amazed that people come up now and recognize us," Ingles said. "One night, I was out having dinner with my family and someone came up and asked for my autograph.