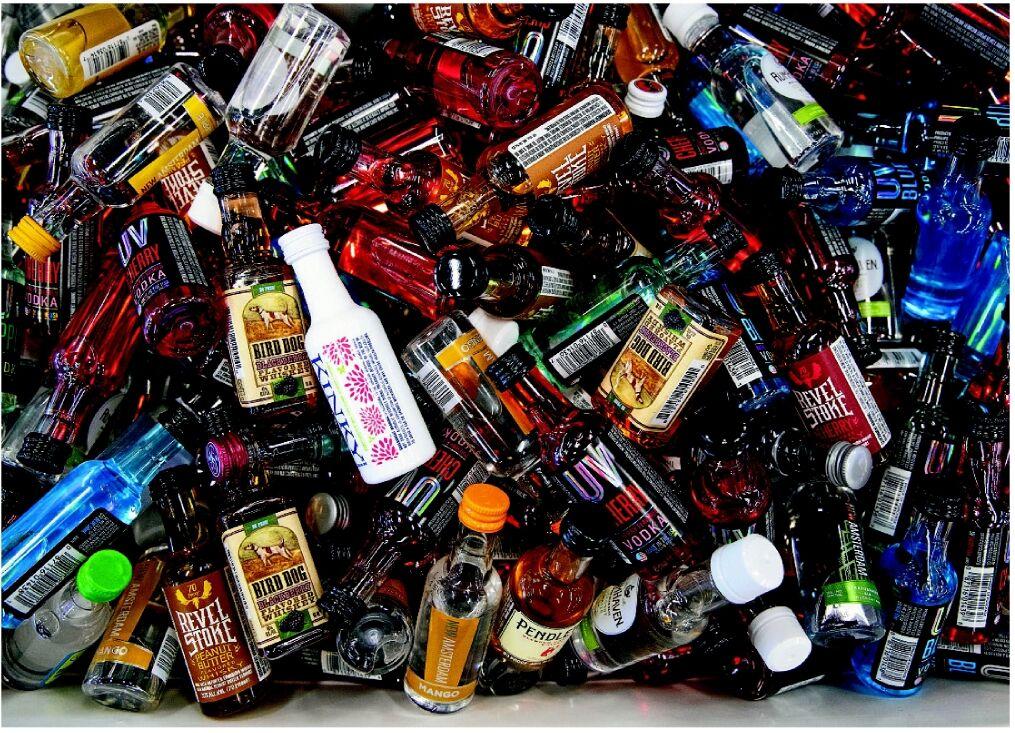 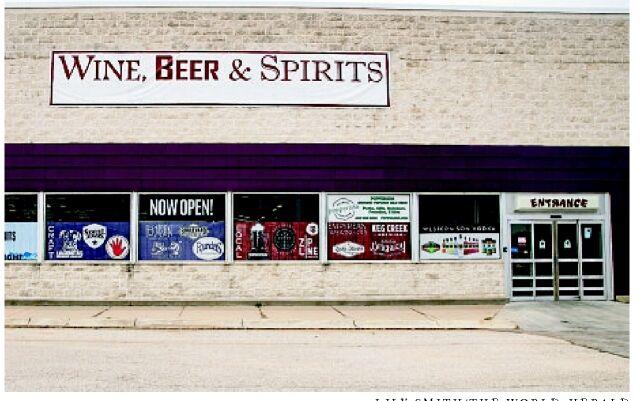 The exterior at Wine, Beer and Spirits, 3435 Oak View Drive in Omaha. At top, different types of alcoholic shooters are shown in the store. 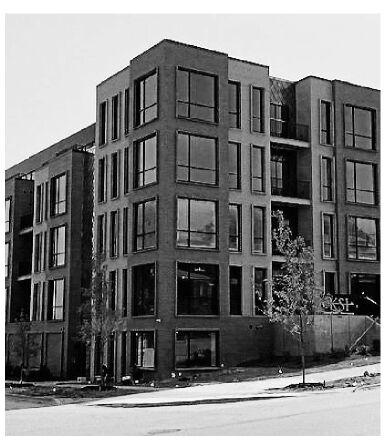 A new restaurant, beer garden and event space in the Blackstone business district at 39th and Harney Streets would be built on three parcels, one occupied by a worn house, another by a detached garage and another by a vacant lot. At left, the 83-apartment Nove Lofts in Omaha's Little Italy is ready to welcome its first tenants. 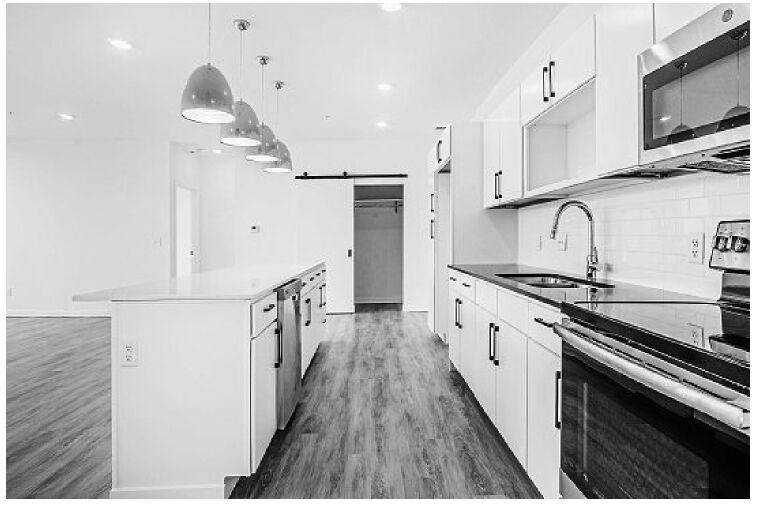 Nove Lofts is on about an acre of land southeast of 10th and Pierce Streets, stretching to Ninth Street, in the historic Little Italy neighborhood. The fourth-floor penthouses have a glass wall with views toward the riverfront. 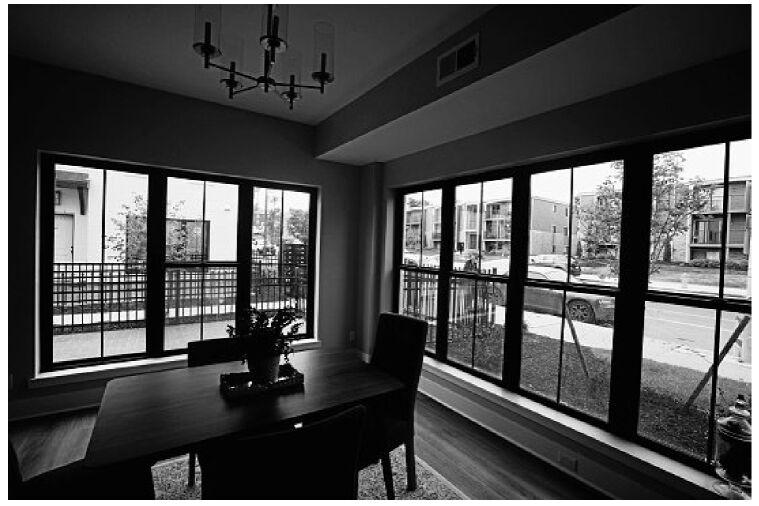 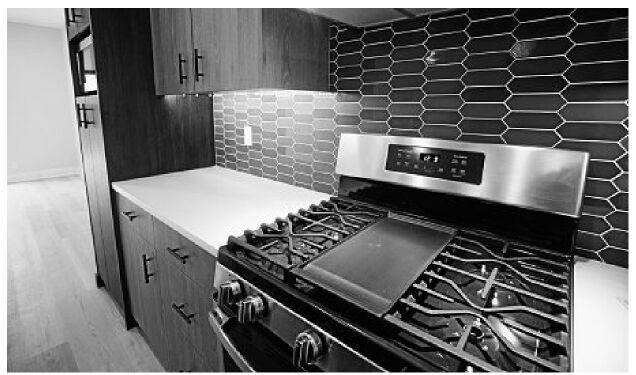 A kitchen and dining room at the new Courtyard on Park Townhomes on Park Avenue. The project includes 12 residences.

When Beau Starkel and partners bought the old Toys R Us building near the Oak View Mall last November, no one could have foreseen a global health crisis that would wreak havoc on the retail market.

But his Omaha team pushed forward in the pandemic, transforming the old toy store into a 30,000-square-foot wonderland for grown-ups.

They bill their Wine, Beer and Spirits operation that opened in late April as the largest liquor store in the state. Project cost: about $3 million, Starkel said.

And as it turns out, he said, the store has performed well in spite of COVID-19 — as many people are staying at home more and concocting their own cocktails.

"It's the best business you can open during a pandemic," Starkel said.

He said more than 6,000 kinds of products have been featured on socially distanced shelves and pallets inside 3435 Oak View Drive.

He and some of the partners also have ownership interest in Thunderhead Brewing Taprooms in west Omaha and the Old Market.

At their new venture, Heiliger said, the group sought to offer an "experience." Greeting customers near the entrance is a 40-foot walnut counter bar, where one can simply quench a thirst or try out a high-priced spirit before committing to the whole container.

A 250-person event space was created during the fivemonth renovation, and later will allow for special activities such as a whiskey or wine tasting event, a barbecue or food night.

Response has been good, Heiliger said. And rarely a day goes by when a customer doesn't reminisce about the old days when they once ran the aisles as a kid in the Toys R Us store.

Indeed, it happened during a reporter's visit last week. A guy told employee Grant Rohan he was on the hunt for an Oreo Stout, after he talked about the novelty brew with a friend. He said a Google search sent him to Wine, Beer and Spirits, which he didn't know existed before then.

Once inside, the visitor remarked: "It's like full circle. I came here as a kid."

"Initially they're shocked at the inventory," he said. "We think people have been wanting something like this for a long time."

Adam Beaver worked downtown but lived in suburbia and wanted to give the urban lifestyle a whirl.

It's been a month or so since he and his daughters moved to the new Courtyard on Park Townhomes, and he said they're not disappointed.

"I love it," Beaver said, noting he got rid of a long commute from Valley and that his girls are exploring new territory. "The kids and I had a suburban life, and we wanted to move to a more urban area."

They are among the first residents of the whitebricked town homes on Park Avenue south of Leavenworth Street priced at $315,000 and above.

The 12-residence project of Milestone Development stands out on the transforming midtown corridor because it infuses brand new for-sale homes among apartment buildings (many of them recently rehabbed) and aging houses.

So far, a third of the town homes that span about 1,640 square feet are claimed, said leasing agents Debbie and Bob Jensen of NP Dodge Real Estate. Each comes with two bedrooms, a two-car garage, deck and front patio.

The Beavers have a rooftop terrace and views of the downtown riverfront. On a day last week, dad was helping to move in new patio furniture, as daughters Kyrsten, a college freshman, and Abbigale, a high school sophomore, took their dog for a walk.

Beaver said that prior to the purchase, he considered the area's past reputation as a rough part of town. But he noted the continued redevelopment and renovated housing going on.

"It's a different environment than it was just five years ago," he said.

A new restaurant, beer garden and event space — price tag about $4 million — would be added to the western edge of the Blackstone business district under a plan submitted to the City of Omaha.

The event space is to be called the Holm and used primarily for overflow seating and catered events, including weddings.

The plan says there would be shared parking arrangements within the Blackstone district.

JAT investors told city planners that they see a fit for an open-air, beer-garden-type venue in the growing commercial district, and anticipate completion of the project in the summer of 2021. They anticipate the new businesses employing more than 20 full-time and part-time workers.

The City Planning Board last week recommended approval of tax increment financing of $678,835. The plan has yet to go to the City Council.

The project would be built on three lots at 3922-26 Harney St. A vacant single-family house and a detached garage would be cleared. The third parcel is a vacant lot.

City of Omaha planners said the project would redevelop an underused site that contains a property with code violations, and said it would add economic activity. They anticipate challenges with land preparation, given a steep grade change on the property.

It's taken several years and a switch of developers, but a five-level residential building near Ninth and Pierce Streets in Omaha's Little Italy is ready to open.

Nove Lofts expects to welcome the first wave of residents this week to 925 Pierce St.

The name Nove (NOHveh) translates to "nine" in Italian and is a play on the address, said developer Eric Wieseler, whose investment partner is Eric Hochstein. They worked with Alley Poyner Macchietto Architecture on the $15.3 million project. First Management Inc. is the management and leasing company.

The building finished with 83 units and views of the river valley and bluffs. Said Wieseler: "On a clear day, you can see all the way to the town of Missouri Valley."

Penthouse units have private terraces; all residences have a balcony and access to two rooftop patios. Amenities include a courtyard, dog run and picnic areas. Four stories of apartments are atop an underground parking level.

Wieseler's team took over the acre of land southeast of 10th and Pierce Streets a couple of years ago. A previous plan hatched in 2015 by a different developer died a year earlier. It was to feature 19 for-sale upscale townhouses.

Rents for Nove Lofts range from $995 for a one-bedroom unit to $2,800 for a penthouse with two bedrooms and bathrooms and a northern glass wall.

Omaha has added retail outlets to its mix. Among them:

Raygun has officially opened its Old Market store at 1108 Jackson St. The Aug. 27 opening came after months of delays related to construction, planning and the pandemic.

A letter to fans said: "Still, the building is beautiful, the product is awesome, the city is great, the neighborhood is perfect. We've wanted to get into Omaha for the last 10-ish years, so what was a few more months?"

Within the space also is the new Vinyl Cup Records store.

The site has been the home of its partner, Carson's Cookie Fix, since 2016. The renovated site will be a full-service ice cream and cookie parlor. A grand opening was celebrated last weekend.

The exterior at Wine, Beer and Spirits, 3435 Oak View Drive in Omaha. At top, different types of alcoholic shooters are shown in the store.

A new restaurant, beer garden and event space in the Blackstone business district at 39th and Harney Streets would be built on three parcels, one occupied by a worn house, another by a detached garage and another by a vacant lot. At left, the 83-apartment Nove Lofts in Omaha's Little Italy is ready to welcome its first tenants.

Nove Lofts is on about an acre of land southeast of 10th and Pierce Streets, stretching to Ninth Street, in the historic Little Italy neighborhood. The fourth-floor penthouses have a glass wall with views toward the riverfront.

A kitchen and dining room at the new Courtyard on Park Townhomes on Park Avenue. The project includes 12 residences.