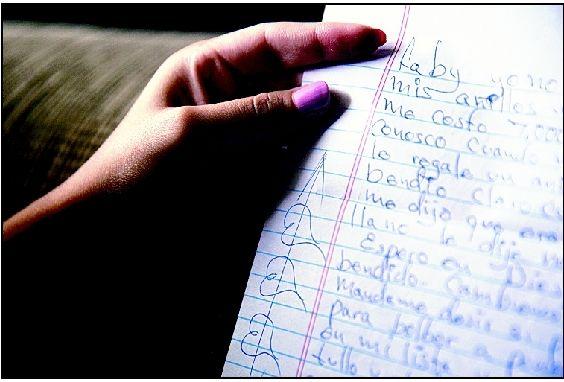 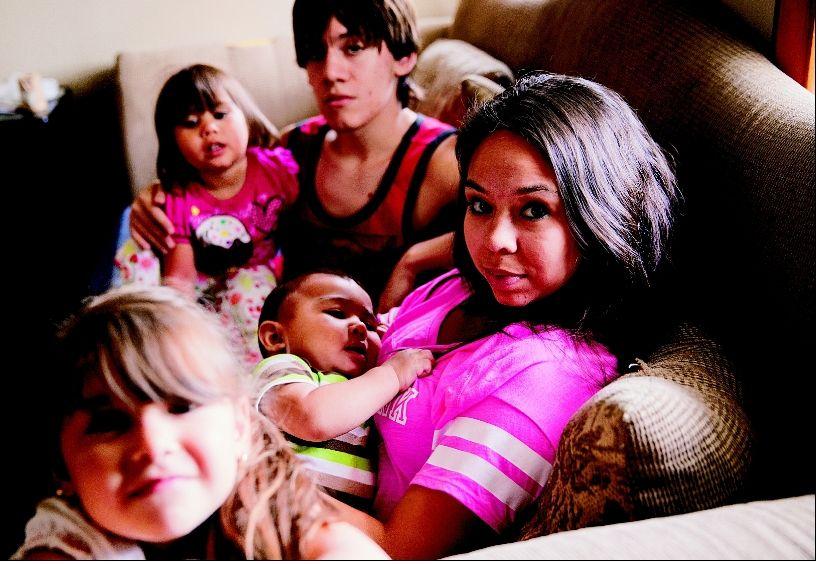 "He really wanted to be around my kids, because he had missed pretty much everything," Fabi Madera, at right, said about her father, Miguel Madera, who was returned to prison in the state's roundup of some who had been released too early. With Fabi, clockwise from left, are Eunique Baird, 4; Luna Lopez, 2; Enrique Madera, 18; and Miguel Angel Lopez, 9 months. At top is a letter Miguel Madera wrote to Fabi from the Work Ethic Camp in McCook, clear across the state. 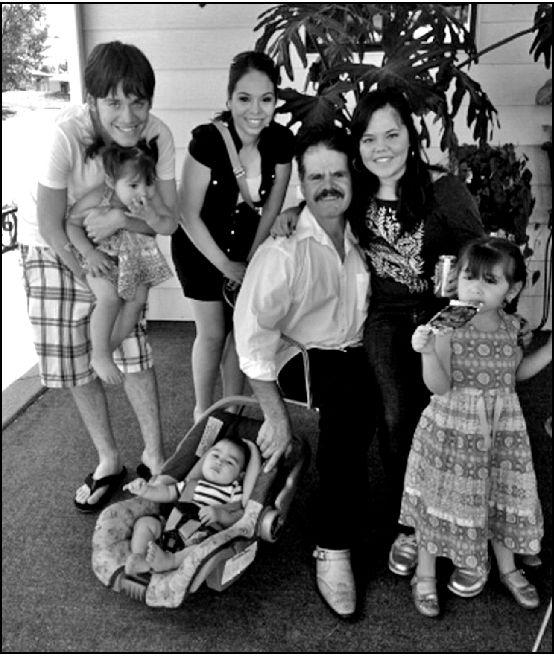 Miguel Madera headed out to fix the air conditioner at a Catholic church on a cool morning in late June.

He had already made his daily call to the probation number, the one that told him he didn't need to come in for a drug test. He had said goodbye to his daughter, Fabi, a 23-year-old starting to believe that her dad would finally stay clean.

Out the front door went Miguel, a longtime South Omaha HVAC repairman, a twice-convicted cocaine dealer and a man convinced he had served the hard time he owed the state.

Out the front door he went, unaware that in an hour he'd be surrounded by Omaha police officers, their guns drawn, screaming at him to get his hands behind his back.

There had been a mistake, all right.

The State of Nebraska, for reasons not fully explained, had miscalculated the prison sentences of more than 750 inmates, reducing those sentences by months or years. Prison officials had done this for years, and emails obtained by The World-Herald suggest it was no accident.

In fact, the prison official in charge of

calculating sentences appears to have knowingly ignored rulings handed down by the Nebraska Supreme Court as well as advice from the Nebraska Attorney General's Office. It's a staggering mix of bureaucratic ego and general incompetence topped by a stunning absence of leadership inside our prison system.

And because of this "mistake," at least 180 prisoners — including violent criminals and sex offenders — had actually been released from prison early, often years early.

We're fixing it while not distinguishing between Released Prisoner A, who is still an obvious threat to society, and Released Prisoner B, who got out of jail, believing he had served his time, and is working to put his life back together.

We're fixing it by clamming up, not giving even the families of those rearrested basic information about how much longer their loved ones will be in prison.

And we're fixing it by sending Miguel Madera back to prison, even though he hasn't received so much as a speeding ticket since his release three days after Valentine's Day, and even though the financial and psychological pain of that rearrest ripples outward, affecting his daughter, his grandchildren, his employers and his South Omaha customers.

"Listen, I can't even imagine how many lives my dad ruined with his deliveries," Fabi Madera says. "I can't imagine the heartbreak he has caused. But how does (rearresting him) help anyone? Why are we ruining his life and the lives of his family?"

Things were much simpler on Feb. 17, the day Fabi's boyfriend picked up Miguel from prison. Miguel had one request: He wanted to stop and pump gas. He hadn't put gas in a car in nearly six years — not since he went to jail on two counts of possession of cocaine with intent to distribute.

He moved into Fabi's house, but only after father and daughter had a long, serious conversation about the house rules. He couldn't sell drugs. He couldn't use drugs. There would be no drugs around Fabi's kids. One strike and he was out.

"He really wanted to be around my kids, because he had missed pretty much everything," Fabi says. "And a part of me wanted him to stay with me, where I could keep an eye on him. But I was always nervous. And when he started doing the right things, I will admit... I was a little surprised."

The right things included calling the probation number each morning and going to take his surprise mandatory drug test if his number came up. He passed every test, his daughter says.

The right things included restarting in the HVAC business from the ground floor. Before the drug convictions, Miguel ran his own business. Now he would be working for someone else.

He borrowed hundreds of dollars, some of it from Fabi and her boyfriend, to buy tools and fix up his work van. He visited old friends in the business, who agreed to give him a chance.

And the phone started ringing: My furnace is on the fritz. My air conditioner went out. Can you help?

He was there to see Fabi graduate from Metro Community College in May. She majored in criminal justice and is about to start an internship with the Omaha Police Department, the next step in her plan to become an area police officer.

And he was there when his family threw him a surprise 52nd birthday party in May. When he saw all his relatives in his sister's backyard — people he loved, people he hurt — he started to cry.

Good things happened until that late June morning, when Fabi found herself driving frantically to the contractor's shop where her father had been handcuffed. When she arrived, he was gone.

Unbeknownst to the Madera family, the Great Nebraska Prisoner Roundup had begun.

There are, of course, two lines of thinking about that roundup.

The first has been articulated byjudges and prosecutors. It goes something like this: You committed a serious crime, and were given a sentence by a judge who weighed your case thoroughly. You should serve that sentence.

The other line of thinking, made by State Sen. Ernie Chambers and Douglas County Defender Thomas Riley, argues that we should try to differentiate between those who are a danger to others and should be re-imprisoned, and those who have exited prison and started to get their lives together.

"Legally speaking, the state has the authority to do what they are doing," Riley told me. "Now, is it really the moral thing to be doing? What about on guys who have been out for a while, guys who have families and jobs? You have to wonder: What's the societal benefit we get out of doing this?"

No matter where you fall on that debate, it seems hard to justify what happened once Miguel Madera was taken away in the back of a police car.

His daughter Fabi, the police officer in training, drove back to her house and called the Governor's Office. She called the Attorney General's Office. She called the Department of Corrections. The people who answered sounded like they were reading off talking points, she says. She called her father's probation officer. The phone rang and rang. Over and over, she asked the same question: Why did you arrest my father?

"No one had any answers," she says.

It was nearly a day before she learned for certain that her father hadn't been arrested because of something new. He had been rearrested because the State of Nebraska had mistakenly released him more than two years early.

And the confusion continues: Fabi says she can't get answers on why he got transferred all the way across the state to the Work Ethic Camp in McCook. She can't get answers on why several letters he has mailed to her — letters meant to describe his situation in prison — haven't reached her mailbox. She now knows he has two more years to serve, but she is unsure if he can win parole as early as his first hearing, in a few weeks.

As Fabi waits for answers, her boyfriend is trying to finish some of Miguel's subcontracting jobs. The money, if there is any, will go to pay back loans Miguel Madera took out to restart his business. Any money left over will be spent on a lawyer.

Fabi herself is preparing to start her police internship next month. She hopes to eventually become a police officer in Omaha or Bellevue. It's a dream she's had since she was a little girl, a dream her father supports. She hopes that dream isn't in jeopardy now.

"I have had too many (family members) on the wrong side of the law," she says. "I want to be on the right side."

Hundreds of miles from his daughter and his new life, Miguel Madera sits in the McCook work camp, stewing. He wrote me a letter that Fabi delivered this week.

"I was led to believe that my debt to society had been paid," he wrote. "I feel that I'm at a complete loss with all that has happened, a mistake that the state has now made."

And he wrote this: "I made promises to my employees, customers, banks; as well as to my family, friends and to myself. All of those promises are now in jeopardy."

• Sentenced to six to 10 years in prison; five of those years were the mandatory term for drug dealing — meaning they had to be served first, before his remaining sentence was cut in half under the state's good-time law

• Projected release date is Aug. 17, 2016; he has a parole review hearing scheduled in a few weeks

"He really wanted to be around my kids, because he had missed pretty much everything," Fabi Madera, at right, said about her father, Miguel Madera, who was returned to prison in the state's roundup of some who had been released too early. With Fabi, clockwise from left, are Eunique Baird, 4; Luna Lopez, 2; Enrique Madera, 18; and Miguel Angel Lopez, 9 months. At top is a letter Miguel Madera wrote to Fabi from the Work Ethic Camp in McCook, clear across the state.