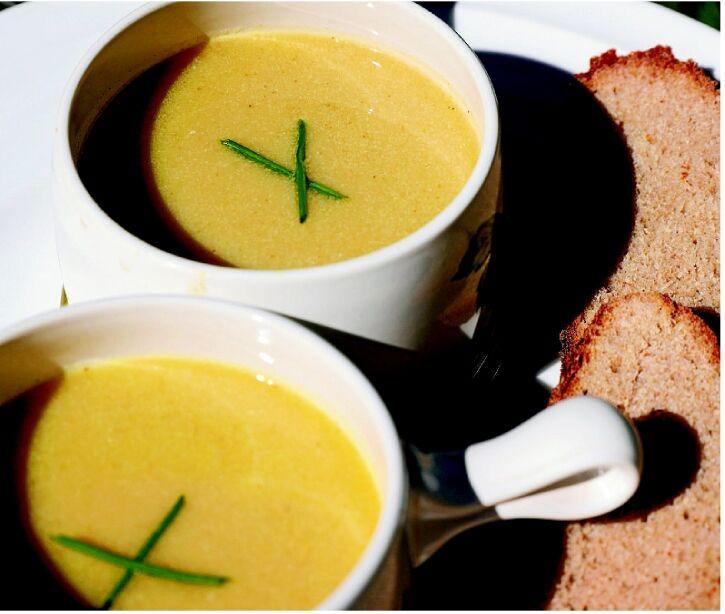 Onion is the featured ingredient in this Curried Onion Soup. 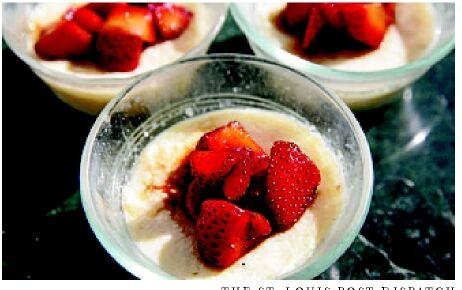 Onion is the featured ingredient in these Onion Custards With Balsamic Strawberries. 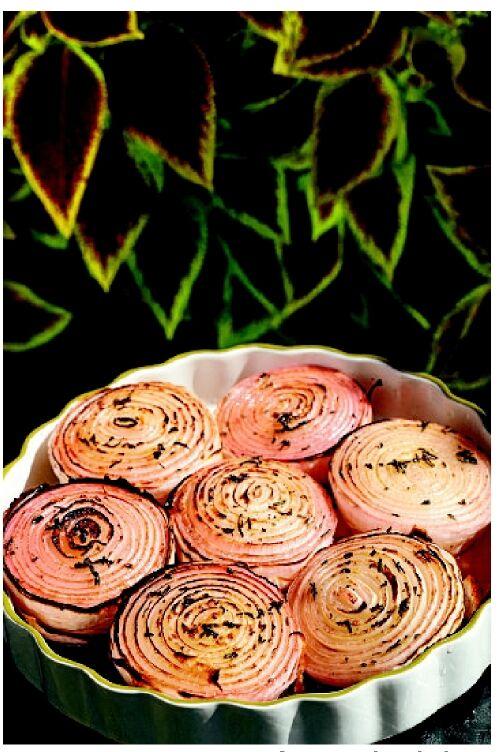 Onion is the featured ingredient in these Marinated Slow-Roasted Onions.

Pity the poor onion. Always the culinary bridesmaid. Never the bride. • You don't sit down to a nice bowl of onions for dinner. No one makes onion-flavored soft drinks, or if they do, I don't want to know about it. • Even the lowly garlic bulb is the sole focus of at least two restaurants in California. But onions? Nada.

Onions are the supporting players in a dish — important as a flavoring, but used only to make the star attraction taste better. When served a plate of carbonnades a la flamande, no one ever says, "the beef was good, but those onions were really spectacular."

But the time has come to give the humble onion its due. To bring it to the fore. To peel back the layers, so to speak, of what makes them so good.

Therefore, I prepared a handful of dishes that brought the onion out front and center and put it in the spotlight. With these dishes, theoft-overlooked onion is finally the bride.

I started with the simplest and most straightforward of all onion entrees, an onion sandwich.

If your initial reaction to the idea of an onion sandwich is anything like mine, right now you are saying "ick." But bear with me, because I saw the recipe for it in a cookbook by Jacques Pepin, and it is his re-creation of a favorite dish he was served by James Beard.

Those are two of the greatest food minds of the last 80 years. If they like onion sandwiches — nothing more than thin slices of sweet onion on white bread spread with a mixture of mayonnaise and mustard — then I, for one, am going to try them.

So I tried them. And let me tell you, Jacques Pepin and James Beard knowwhat theyare talkingabout. Sweet onions are mild enough to be eaten raw, in small doses. And the combination of mayonnaise and mustard — which is basically Durkee Famous Sauce sandwich spread — is the smooth and lightly spicy counterpoint the onion needs.

Next up was a dish I've made several times over the years, an onion tart.

This tart takes full advantage of caramelization, an easy but fairly slow process that brings out all of an onion's rich, golden sweetness. I caramelized the onions by cooking them over low heat for about a half-hour and then spread them over a sheet of puff pastry. I added kalamata olives for flavor, and a few anchovies.

The classical French way to make this tart is with anchovies. I happen to like anchovies, though I recognize I am in an ever-shrinking minority. If you don't enjoy them, the tart is still perfectly good without them. It just doesn't have the happiness that anchovies bring it.

I next made a curried onion soup.

It's an onion soup with curry powder, which, as it turns out, goes extremely well with onion soup. Fresh lime juice brings a nice, tart edge to it, and if the curry flavor is too strong or spicy, you can always temper it with a little cream.

No, that's not just an excuse to add cream to soup, but yes, it also is. A little cream makes almost any soup taste better; it's an old restaurant trick.

While searching for temptingly suitable dishes to make for this story, I stumbled upon a recipe for lettuce soup over a smooth onion custard. The lettuce soup was not onion-forward enough formy purposes, but I couldn't get the idea of onion custard out of my head.

It sounded heavenly, and it was. The recipe is from Joel Robuchon, who was even more of a culinary light than Pepin and Beard. The only question was what to do with it that still made the onions the centerpiece of the dish.

So I topped my onion custard with balsamic strawberries. Though sweetened strawberries with balsamic vinegar is often served as a part of dessert, my unsweetened version was savory. Try serving it as a side dish at an elegant dinner and watch your guests' looks of curious surprise turn to ones of total delight.

For my last dish, I went back to my concept of making the onion inescapably at the forefront of the dish with Marinated Slow-Roasted Onions.

The simple marinade is red wine vinegar diluted with an equal amount of water and flavored with fresh rosemary. The onions are cut in half and allowed to soak in the marinade overnight before being roasted to bring out their natural sweetness. A bit of brown sugar in the marinade gives it a lightly sweet-and-sour tang, and the browned onion halves are also gorgeous.

It is the type of dish that could be served on a weeknight or for a big holiday dinner. It is so hearty and good that your family and friends won't even stop to think that eating onions by themselves is unusual.

4 (1/8-inch-thick) slices sweet onion, such as Vidalia or Walla Walla, about 3 1/3 inches in diameter

Using a glass, cocktail shaker or a round cutter, cut 8 circles as large as possible out of the slices of bread. Mix the mayonnaise and mustard together. Spread each bread circle with 2 teaspoons of the mustard-mayo mix. Place 1 slice of onion on 4 of the bread rounds (it should cover them to the edges). Top with the remaining bread circles. Press lightly tomake them adhere.

Spread some of the remaining mayonnaise-mustard on the outside edges of each sandwich (this is easiest if you are holding them in your hand). Roll the edges in the chives until coated. Press lightly to make the chives adhere, and serve.

Yield: 8 servings (as an appetizer)

Heat the oil in a large skillet (preferably nonstick) over medium heat. Add the onions and salt, and cook, stirring often and adjusting the heat as needed, until the onions are caramelized, about 35 minutes; they should be soft and darkened to a golden shade of tan. If the onions are sticking in the pan, add a little water.

Add 1 teaspoon of the rosemary and season with salt to taste. Transfer to a plate and let cool to lukewarm, at least 15 minutes.

Meanwhile, prepare the dough. Gently unfold the sheet of puff pastry on a lightly floured surface. Mend any cracks in the seams by pinching the dough together. Roll out the dough to an 11-inch square. Lift it gently and set it on the prepared pan. Prick the dough with a fork in several places (but not the rim). Refrigerate until you're ready to assemble the tart.

Distribute the onions evenly over the dough (tuck in any strands that extend beyond the square, or they will burn). Arrange the olives evenly on top. If using, lay the anchovies between the olives. Bake until the crust is golden on top and underneath all the way to the center (lift it up to check), 20 to 25 minutes.

Transfer to a cutting board and sprinkle with the remaining ¼ teaspoon of rosemary. Serve warm.

Pour in the stock and bring to a boil. Lower the heat and simmer 10 minutes, or until the onions are very soft.

In a blender, working in batches of no more than 2 cups, puree the soup until very smooth. Scrape down the sides of the jar if necessary. The soup can be made up to this point and refrigerated.

Heat the soup through. Remove from the heat and whisk in the lime juice, salt and, if using, the half-andhalf. Taste and add salt if needed.

Combine the strawberries and vinegar in a small bowl and let sit for an hour.

In a large skillet, combine the butter with the onion.

Cover and cook over low heat, stirring often, until softened, about 15 minutes.

Transfer the onion to a blender. Add the chicken stock and puree. In a medium bowl, whisk the egg, then whisk in the milk and onion puree. Season with the salt, the pepper and the nutmeg. Butter 4 custard cups or small ramekins. Pour in the onion mixture and cover with plastic wrap.

Set a round rack in a large, wide pot. Add enough water to reach just under the rack without touching it and bring to a boil. Set the cups or ramekins on the rack. Cover and steam over low heat until the onion custards are lightly set, about 22 to 25 minutes.

Strain the strawberries and divide among the portions.

In a small bowl, blend water, vinegar, brown sugar, 1 teaspoon of the chopped rosemary, salt, pepper and optional red pepper. Cut onions in half horizontally and trim both ends, but leave the skin on (it will help hold the onions together as they roast). Pour the marinade into a baking dish that is large enough to hold all 8 onion halves, and place the onions into the dish, cut-side down. Cover with plastic wrap and refrigerate overnight.

Preheat oven to 400 F. Flip the onions over in the marinade so the wide sides are facing up. Top each onion half with ½ tablespoon of butter and sprinkle with the remaining 1 teaspoon of chopped rosemary.

Roast until golden brown, about 1 hour, basting with the marinade once or twice. Remove from heat and sprinkle with the sauce. Remember to remove the outer skins before serving.

"We are in crisis mode." Those are the words of one Omaha physician treating COVID-19 patients on the front lines last week. The facts: More t…

A man was fatally shot Thursday evening while struggling with Omaha police during a traffic stop, police said.

High schools should at least give winter sports a try

High school football is in its final furlong. The finish line is Friday.

CDC: Be thankful for home, and stay there

The safest way to celebrate Thanksgiving this year, the CDC says, is by staying put.

Onion is the featured ingredient in this Curried Onion Soup.

Onion is the featured ingredient in these Onion Custards With Balsamic Strawberries.

Onion is the featured ingredient in these Marinated Slow-Roasted Onions.