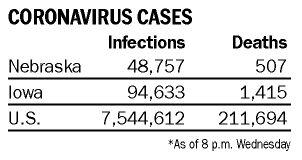 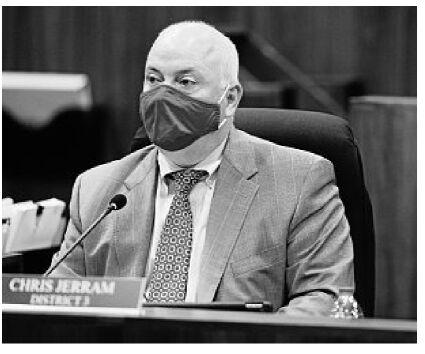 City Council President Chris Jerram criticized the Police Department for not ticketing violators of the city's indoor mask requirement, suggesting that lack of follow through on the ordinance has contributed to rising coronavirus numbers in the city.

Despite handling 166 reports of Omahans violating the city's indoor mask mandate, Omaha police have yet to issue a single $25 ticket.

Omaha City Council President Chris Jerram this week criticized what he called a lack of enforcement, asserting that a lack of follow-through on the ordinance has contributed to rising coronavirus numbers in the city.

But Omaha Police Chief Todd Schmaderer defended his department's response, arguing that educating the public and asking for voluntary compliance is a better approach than jumping straight to issuing tickets.

Jerram, a Democrat who represents downtown and midtown, said behaviors around mask-wearing won't change unless the law is enforced.

"But as we all know, there is no enforcement of this law," Jerram continued. "That is another reason why I believe the (coronavirus) rates are going up."

The City Council voted 5-2 Tuesday to extend the city's mask requirement to Nov. 24. Jerram, who is not seeking reelection next spring, voted in favor of the ordinance.

Schmaderer, in an interview with TheWorld-Herald onWednesday, said officers have conducted random compliance checks at businesses and responded to calls the department receives about violations.

People have largely complied when officers engage someone not following the ordinance or respond to a call, Schmaderer said. Officers have used the interactions to educate the public about the ordinance, and Schmaderer said he sees no value in issuing a citation after someone has agreed to wear a mask.

"If we reach a point where we have to issue citations to make a point, we certainly would, but we haven't encountered that," Schmaderer said.

"I think it's erroneous to place the rise and fall of the coronavirus numbers (at) the feet and on the doorstep of the Omaha Police Department," he said.

The department has handled 166 complaints since the mask mandate took effect Aug. 12, according to data provided by Schmaderer. He said that figure represents a mix of complaint calls and compliance checks.

The mask ordinance generally applies to public indoor spaces, but it includes several exceptions, including one that exempts mask-wearing in places where people canmaintain 6 feet of social distance.

Masks also aren't required outdoors, for those seeking government services or for those seated at a bar or restaurant to eat or drink.

Schmaderer said that when a new ordinance is issued in the city, the first wave of enforcement should be about education and awareness. There's no need to "over-police," he said.

Deputy Omaha Police Chief Scott Gray said the most complaint calls come from convenience stores, where people usually spend only a few minutes inside. Grocery stores and fast food restaurants also account for some of the complaint calls, he said.

"Nothing the government does or the City Council does is going to change those few who choose to disrespect the law unless the law is enforced," Jerram said.

Lt. Sherie Thomas, an Omaha public information officer, said in an email that the department has participated in multiple campaigns to reduce the spread of the virus. Officers have provided free masks to employees working at meatpacking plants, and the Southeast Precinct worked with local businesses to create bilingual ads to educate people about the ordinance.

The department also partnered with the County Health Department and the youth sports league Police Athletics for Community Engagement to set up a free mask site in South Omaha.

Jerram also said he's been contacted by people who have witnessed police officers not wearing masks.

The department has received a few complaints about officers not wearing masks, Schmaderer said. Those complaints were "general in nature" and police leadership used those instances to reiterate the need for mask-wearing, he said.

As of Wednesday morning, 59 of Omaha's nearly 900 police officers had tested positive for COVID-19, according to Schmaderer.

City Council President Chris Jerram criticized the Police Department for not ticketing violators of the city's indoor mask requirement, suggesting that lack of follow through on the ordinance has contributed to rising coronavirus numbers in the city.