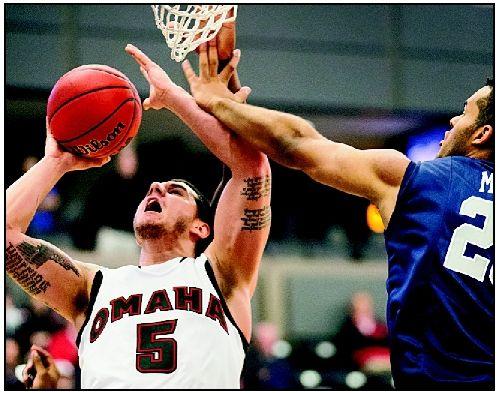 UNO's Mike Rostampour is fouled by Nevada's Robyn Missa in the first half Saturday at Ralston Arena. The Mavs trailed 32-31 at halftime before opening the second half with a 23-5 run. 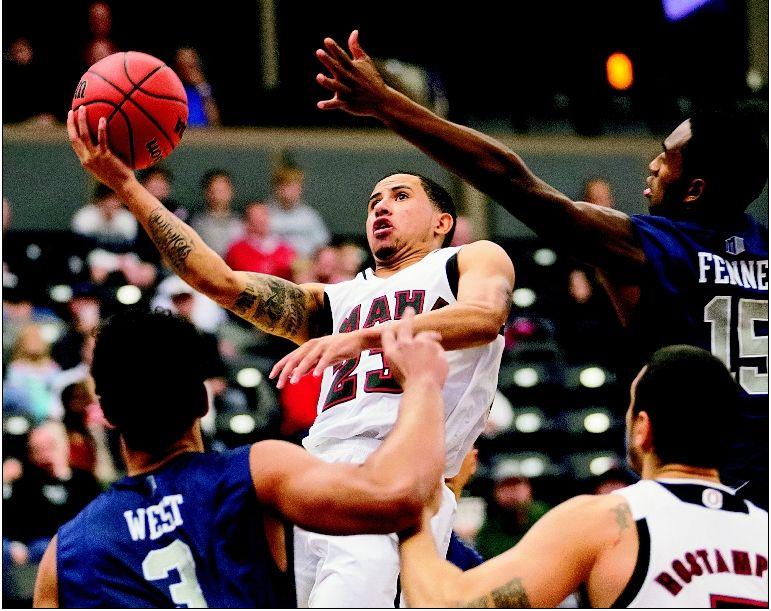 UNO's Marcus Tyus was perfect from the field Saturday, going 5 for 5 from the floor, including two from 3-point range, en route to scoring 12 points. 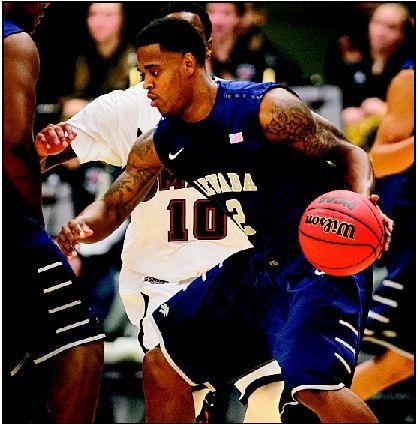 After what UNO coach Derrin Hansen called a lethargic first half, his Mavericks were anything but in the second half.

The University of Nebraska at Omaha turned in a nearly flawless final 20 minutes, outscoring Nevada 47-22 after halftime on the way to a 78-54 rout in front of 1,723 fans at Ralston Arena.

Tre'Shawn Thurman totaled 18 points and Mike Rostampour added 17 — season highs for both — as the Mavericks shot 60.7 percent (17 of 28) from the floor in the second half.

Hansen attributed the turnaround to his team's attention to the glass in the second half.

The Wolf Pack outrebounded the Mavericks 24-14 in the first half, including 11 offensive boards.

"They had about 11 or 12 more possessions just on offensive rebounds," Hansen said, "and I just didn't think we did a good job in the first half.

"That being said, we're down one. So I said if we just win some possessions in the second half and win our share and the game stays the same, I said we'll be in good shape."

The Mavericks (3-2) limited Nevada to four offensive rebounds in the second half, and the Wolf Pack offense struggled, making 6 of 23 field goals after half time.

Thurman, a true freshman out of Omaha Central, said the Mavs wanted to be more physical defensively in the second half.

"I definitely saw that they were getting way too many points in the paint, so we wanted to turn it up on defense," Thurman said. "Also rebounding. We weren't rebounding well.

"So we decided we had to play way more physical, because you can't let the refs decide if it's a foul or not. We have to play through."

But a dunk and layup by Michael Perez followed by a Tyron Criswell 3-pointer drew the Wolf Pack even at 23-23 with 7:17 left before halftime.

Criswell, who graduated from Omaha Benson and was the NJCAA Division II player of the year last season at Central Community College in Columbus, was playing in front of about 40 friends and family.

He scored five points in a season-high 24 minutes off the bench.

"It was a good experience coming home and playing in front of them," Criswell said. "I felt like I had a lot of support here."

With Nevada leading 32-28, UNO closed the gap on a 3-pointer by Marcus TVus at the halftime buzzer.

Tyus finished with 12 points on 5-of-5 shooting, including two from 3-point range.

"That's huge. It gives us momentum going to the second half," Rostampour said of Tyus' half-ending 3. "That's a big shot right there."

UNO's Mike Rostampour is fouled by Nevada's Robyn Missa in the first half Saturday at Ralston Arena. The Mavs trailed 32-31 at halftime before opening the second half with a 23-5 run.

UNO's Marcus Tyus was perfect from the field Saturday, going 5 for 5 from the floor, including two from 3-point range, en route to scoring 12 points.