After South High defeated Creighton Prep 1-0 Tuesday in the Nebraska Boys Class A soccer championship game, the players and coaches from both teams gathered with their trophies for a joint photo — a rarity in high school sports. 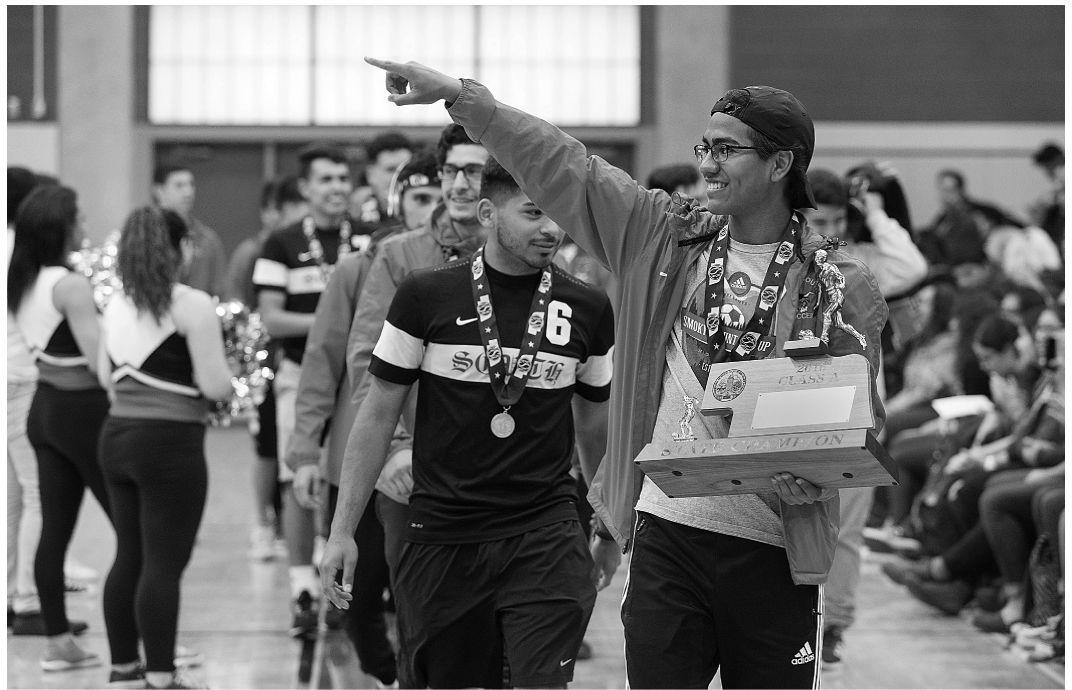 Carrying the coveted trophy, Alex Gomez leads his South High soccer teammates in a victory lap during a pep rally at the school the day after the Packers won the state championship at Morrison Stadium. 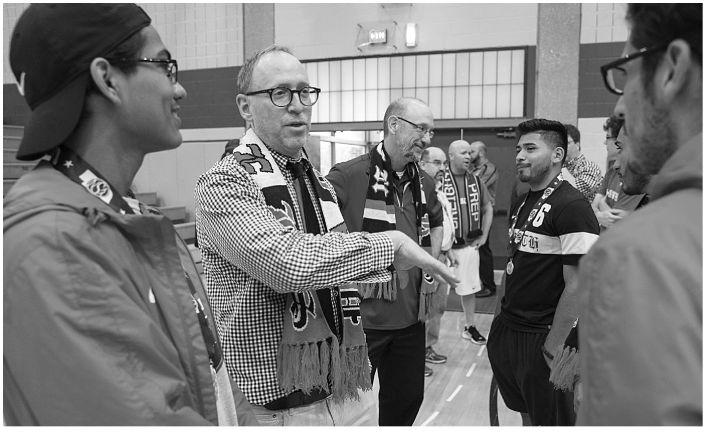 At left, Creighton Prep coaches Tom Hoover, second from left, and Jim Swanson took three of their players to the Wednesday pep rally at South, where they mingled with Gomez, far left, and other members of the Packer faithful. "Classy when you win, classy when you lose," Swanson said. At left below, Creighton Prep player Edward Gordon hugs it out with South High player Juvenal Jacinto. 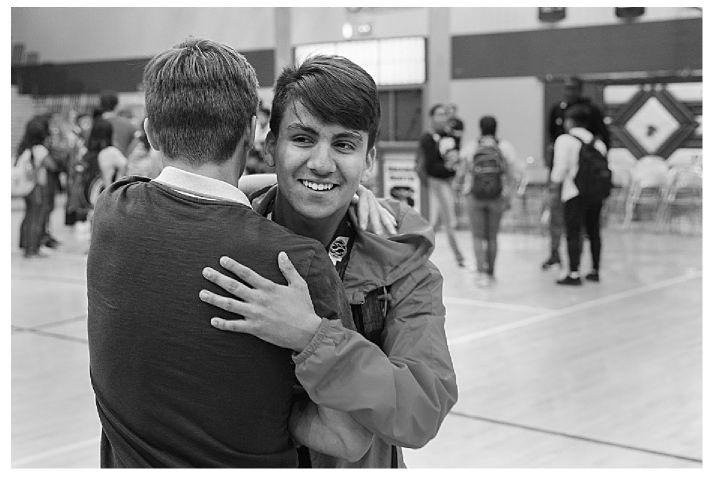 They shrank into the first bleacher seats they could find, trying to be inconspicuous. But a South history teacher at the microphone broke in with this announcement: "We have some of our Creighton Prep friends with us as well!"

For a split second, the gym froze. But the South High soccer team set the tone. South players and coach Joe Maass rose from their chairs, crossed the gym floor and took a minute to give warm hugs and high-fives to the Prep group. The rest of the student audience broke into applause. Teachers dabbed their eyes.

It was the second spontaneous show of goodwill between these rivals in less than 24 hours. And it was another reminder — much-needed in a time of sharp national divisions — that despite wearing different jerseys, we're really all on the same team.

It is easy, whether on a soccer field or in life, to pigeonhole everyone as either Us or Them. Right now, in the midst of a wild presidential campaign, the two sides have become even more dug in — the Righteous Us and the Terrible Them.

But perhaps what happened between Nebraska's two soccer powerhouses last week can provide a hopeful lesson for the months to come.

The first sign came in a photograph after the Class A boys soccer championship game, a hard-fought contest that South won 1-0. It was a group shot of players and coaches and coaches' children from both teams. You see boys in black South jerseys arm in arm with boys in white Prep jerseys. They are posed around first-place and runner-up trophies, and the way they are grouped looks so natural, right down to the players' expressions. Some are flashing triumphant grins. Others look crestfallen.

The captured moment is real, unforced. And the way they are all standing, sitting or kneeling so close together shows that their rivalry, while contentious during games, doesn't carry over past the final whistle.

My colleague Nick Rubek was among the witnesses and snapped his own photo, tweeting it at 9:39 p.m. Tuesday with this comment: "Really, really cool scene."

This scene flashed across the screens of Omahans throughout the city, including mine. It interrupted a Twitter feed of one glum political story after another, contradicting the too-common narrative of disconnect and conflict.

But how could this be? South High, a public school with 2,400 students, couldn't be more different from the 1,000-student, $10,000-a-year Creighton Prep. There are vast gulfs in race, wealth, geography and general life experience. And it's easy to see how those differences, magnified at a high-profile sporting event like the state soccer championship game, could manifest themselves in ugly ways.

Teens know how to go for the jugular.

In the past, Prep has faced rivals whose fans taunt the all-boys school by chanting anti-gay slurs. Prepsters in the stands have returned the favor by hitting their opponents' social class.

And South, a school that has long served immigrants and the children of immigrants, has sometimes been a target based on nationality. In 2010 a Lincoln East fan threw green cards on the field after a game against South. Even in this year's soccer championship Tuesday night at Morrison Stadium, a few Prep fans were said to have yelled at departing South fans this Trumpism: "Build. That. Wall."

Rheadina Foster, a 1996 South grad who was at Tuesday night's game, saw that and in a widely shared Facebook post called it "a sad thing to witness."

Prep Principal John Naatz said in a statement that his school "stands firmly on the field of respect for others and acceptance of the diversity of all people."

Prep officials said a few students had taken Trump signs to an earlier game and were told to leave politics out of sports. And a couple of students tried to wave Trump signs after the championship match, but a school official took them away.

For the most part, fans had behaved better during the game, and Prep did wind up winning the tournament's sportsmanship award. South High Principal Ruben Cano said he didn't hear any jeering or taunting. In fact, at a previous semifinal game, Prep fans who had arrived early for their own semifinal were applauding South in its match against Westside.

"They were cheering for us!" Cano said, with some surprise.

That fraternal goodwill is at the heart of the photograph taken after the game. Cano said it shows what happens when people unify around a common love — in this case, soccer.

"We forget all these differences at the door," he said, "and we come together."

The coaches get some credit for setting the tone.

Maass, a brassy PE teacher at South, and Prep's coaching duo — theology teacher Tom Hoover and counselor Jim Swanson — believe in the game and in their roles as background players and role models.

And losing badly isn't good either.

After that photo was snapped, a South player accidentally broke the Prep trophy. The gold figurine at the top snapped off. Everyone froze.

Then Hoover saved the day by picking up the pieces and laughing hard. The tension broke.

The following day I asked Hoover, Swanson and a few of the Prep players to meet me at South to talk about this special Prep-South magic. As it happened, the only time to grab some South soccer players was right after their pep rally. Many of them were graduating that night at Baxter Arena.

In the Packers' gym it was South's turn to be gracious, and it was. Beyond the hugs and hellos, coach Maass traded his red Packer scarf for coach Swanson's blue Junior Jay one. The applause was sincere. This rival's turf was friendly.

Afterward the players from both teams shrugged it all off as if to say "What's the big deal?"

The players broached their differences with humor.

"It's been a long time since I've been to school with girls," sighed Ed Gordon from Prep.

But soccer has given them common ground. Being on club teams together breaks down barriers. So it's not "that guy" from South or "that guy" from Prep. It's "Ernesto." And "Sean."

As in senior Ernesto Perez Meza, a South senior, and Sean Toohey, a Prep junior — former teammates on a Nebraska Futbol Club team.

When the South players assembled for their team picture, Ernesto took one look at the fallen faces of his Prep friends and approached Sean. Ernesto said something like this: C'mon. Get in.

Before you could say "kumbaya," everyone had crowded around their respective trophies, mixing together. Snap! went the cameras.

It's not like Prep was glad to lose. It's not like Sean didn't want that first-place trophy as badly as Ernesto did. But ultimately, soccer unifies them and even eases the discomfort of entering a rival's gym on pep rally day.

"I was pretty uncomfortable going to a celebration for a team we just lost to," said Tim Kaftan, a Prep junior. "But I felt welcomed. There wasn't any hard feelings." Turning to his South friends, he nodded toward the stands and said: "It was cool you came up."

It was more than cool. It was right.

In embracing each other, both teams showed that even among rivals, there is no them. Only us.

After South High defeated Creighton Prep 1-0 Tuesday in the Nebraska Boys Class A soccer championship game, the players and coaches from both teams gathered with their trophies for a joint photo — a rarity in high school sports.

Carrying the coveted trophy, Alex Gomez leads his South High soccer teammates in a victory lap during a pep rally at the school the day after the Packers won the state championship at Morrison Stadium.

At left, Creighton Prep coaches Tom Hoover, second from left, and Jim Swanson took three of their players to the Wednesday pep rally at South, where they mingled with Gomez, far left, and other members of the Packer faithful. "Classy when you win, classy when you lose," Swanson said. At left below, Creighton Prep player Edward Gordon hugs it out with South High player Juvenal Jacinto.