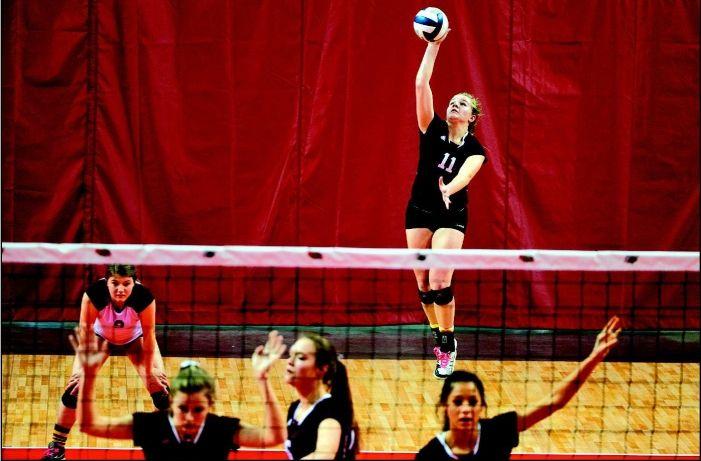 Outside hitter Katie Stephens has elevated her play each year that she's started for Papio — after 287 kills as a freshman, she improved to 326 as a sophomore and 422 as a junior. "She's been an important part of our team for a long time," coach Kristen Lebeda-Svehla said. 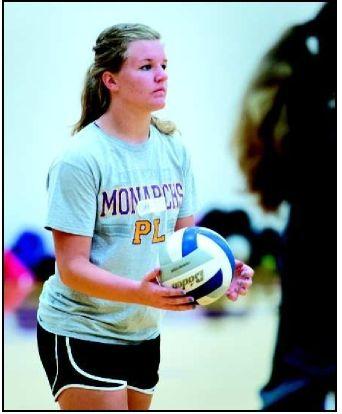 Papillion-La Vista has changed its lineup and scheme to take pressure off of outside hitter and Wayne State commit Katie Stephens.

Opposing coaches seem to have one prevailing thought when it comes to Papillion-La Vista outside hitter Katie Stephens.

Hasn't she graduated yet?

"I hear that all the time," Monarchs volleyball coach Kristen Lebeda-Svehla said. "She's been an important part of our team for a long time."

Those coaches might be happy to hear that Stephens is finally a senior. It just seems as though she's been around forever because she has made a major contribution since her freshman year.

That hasn't changed this season, as Stephens leads the 19-4 Monarchs in kills and digs. She also has assumed more of a leadership role in hopes of helping Papio return to the state tournament — a destination the school has missed just twice since 1990.

"I think we've been playing pretty well," Stephens said. "We've got more depth this year, and we continue to grow as a team."

Papio is coming off the heartbreak of a near state title in 2014. The Monarchs entered the state tourney with a 40-0 record and reached the final, only to lose to Omaha Marian in the Class A championship.

"We've all got a lot of motivation," Stephens said, "and I think we have the potential to get back there again."

The Monarchs had major holes to fill entering 2015 after the graduation of All-Nebraska first-teamers Jessica Peters and Priscilla O'Dowd. Also gone were major contributors Elena Melendez and Ellie McDonnell.

Stephens also had issues, undergoing offseason elbow surgery on her right (hitting) arm. Still, Lebeda-Svehla said it helped ease some anxiety knowing that her leading hitter was coming back.

"Katie stands out," the coach said. "She's a gamer, and she's at her best in the biggest matches."

"I think she was slowed a little earlier on by that elbow," Lebeda-Svehla said.

"Now, she's pretty much back to her old self."

That high number of digs shows that Stephens knows defense as well as offense. She has worked on that aspect of her game and also has become a much stronger player at receiving serves.

"I feel as though that part of my game has improved," Stephens said. "I'm going after more balls and just trying to help the team even more that way."

Stephens, who was voted team captain, has continued to excel despite several changes in the Monarchs' lineup. Most notably, Papio has junked the two-setter attack and returned to the more familiar one-setter offense.

"We've made switches to take some of the heat off of Katie," Lebeda-Svehla said. "I've probably made more lineup changes this year than any other season I've coached."

Lebeda-Svehla added that she has spoken to Stephens about maintaining her intensity level.

"I had to be mean a few times," the coach said. "She plays better angry, and I told her that she has to come all the time with that hair-on-fire attitude."

Papio will need Stephens at her best to survive a challenging final month of the season. The third-ranked Monarchs play at fourth-ranked Papillion-La Vista South on Tuesday night and potentially have at least three more matches with top-ranked Omaha Marian.

"It's been tough to get into a groove this year," Stephens said, "but it seems as though we've got things figured out, and we're really playing well right now."

Outside hitter Katie Stephens has elevated her play each year that she's started for Papio — after 287 kills as a freshman, she improved to 326 as a sophomore and 422 as a junior. "She's been an important part of our team for a long time," coach Kristen Lebeda-Svehla said.

Papillion-La Vista has changed its lineup and scheme to take pressure off of outside hitter and Wayne State commit Katie Stephens.