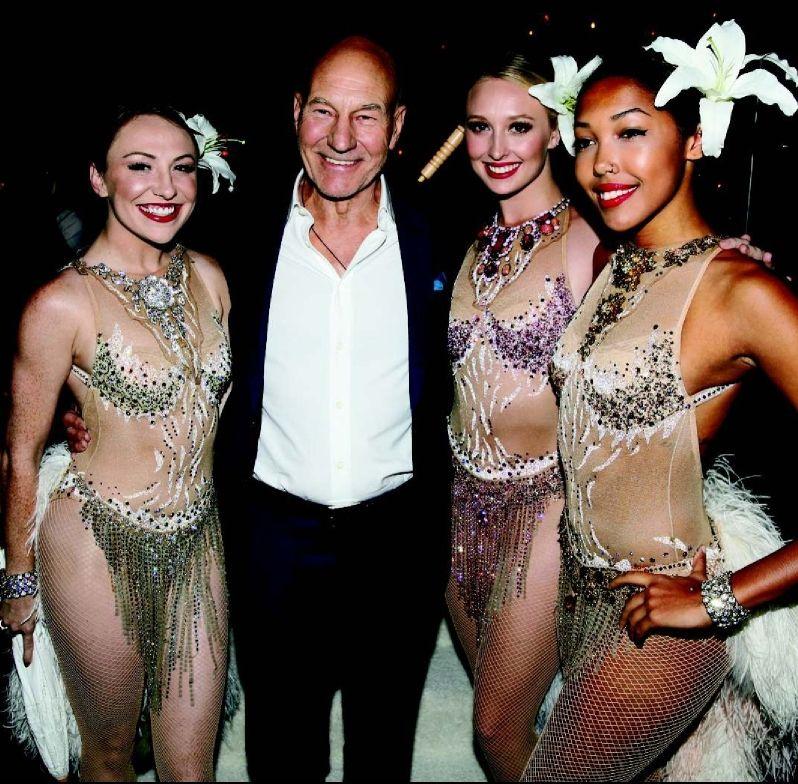 Patrick Stewart (and dancers) at the Los Angeles premiere of his new show, "Blunt Talk." Star Trek alumni have become the coolest older adults around, and Stewart is the de facto leader (hello, Capt. Picard).

Patrick Stewart seems to be having a lot of fun lately. One day he's recording silly videos on his Brooklyn rooftop with songstress wife Sunny Ozell and the next he's tooling around town with bestie Ian McKellen wearing matching bowler hats. • He gives ridiculous interviews, admitting that he only recently realized he was uncircumcised. You might catch a glimpse of him doing a song-and-dance number on Starz, where he's headlining his own comedy series, "Blunt Talk." • Is Stewart the coolest senior citizen in the universe? Hard to say — he has a lot of competition in that area these days, and it's all from fellow "Star Trek" veterans. • The stars of the nerdiest franchise in showbiz history have boldly gone where few AARP eligibles have gone before, conquering the world of pop culture with the media savvy of kids one-third their age. Let the old Trekkers teach you a master class in how to extend your celebrity brand to the next generation.

They use social media as well as a millennial

Sure, Stewart uses Twitter to publicize his upcoming projects. He's been talking up "Blunt Talk," and he'll alert his nearly 2 million followers about his next televised interview. But he also gives his fans an impeccably curated glimpse of his enviable personal life. When he announced his marriage to Ozell on Twitter, he did it with a sure-to-be-viral photo.

But Stewart is no match for "Star Trek's" social-media giant, George Takei. The former Mr. Sulu is a prolific Facebook poster and tweeter who routinely garners tens of thousands of likes for each of his posts, many of which involve the Internet's favorite hobby — cats — and terrible puns.

Many people get more conservative as they get older, to the mortification of younger generations. But Stewart isn't that kind of grandfather. In a recent viral photo, Stewart was snapped at a movie premiere kissing McKellen on the mouth.

Shortly after, Conan O'Brien asked Stewart about the liplock on a guest appearance, and he basically told Conan to lighten up. "That is how we greet one another or say goodbye," he explained. "But Ian isn't the only one. I don't want you to think I'm a one-man guy."

Stewart then proceeded to give a shocked Conan a tutorial on heterosexual male kiss greetings.

Takei, meanwhile, isn't just here for the baby animal pic; he's also been a vocal proponent for LGBT rights, among other issues, as one of the first Hollywood stars to come out of the closet in 2005. Although before that he never kept his committed relationship with now-husband Brad Takei much of a secret.

They're all about the kids

"Kids today," the old codger refrain goes. But Stewart embraces the younger generation. He is, after all, married to a woman more than three decades his junior. And he's recognized that being part of Taylor Swift's crew is the greatest as pirational goal of today's youth, even if he has to use Photoshop to do it.

And he's not beyond a humblebrag to let fans know how weary he was after attending a music festival. Message: I'm 75 and still cool enough to go to music festivals!

Few Trek alums have spent as much time ministering to younger generations than LeVar Burton, who hosted "Reading Rainbow" for more than 20 years — which is why you'd be hard-pressed to find a millennial who doesn't recognize and adore him.

Burton was famous before he wore a banana clip as eyewear on "Star Trek: The Next Generation," given that he played Kunta Kinte in the miniseries "Roots" in 1977. But his years since retiring the character of Geordi La Forge have been spent mainly working on the pro-book children's show.

Further proving his grasp of modern times, when PBS decided to cancel the series in 2005, Burton headed to Kickstarter to fund a new app, and he continues to make videos for the Reading Rainbow website.

They don't mind looking like fools in the name of comedy

Stewart embraces the current TMI culture. He's a Lena Dunham-caliber oversharer (see above, the whole circumcision thing) and doesn't mind looking silly if it might elicit a laugh.

On "Blunt Talk," he plays an aging pundit with a drinking problem and a cocaine habit. In the first episode alone, he "suckles" a transsexual prostitute, resists arrest by climbing on top of his Jaguar and interviews himself on air.

You know who else isn't afraid to look like a fool? Karate chopping former Priceline negotiator William Shatner. The man behind Capt. Kirk has been dogged by rumors that he's difficult to work with, but once he started to own his arrogance and crankiness, he somehow became more lovable — and more marketable. He did a musical/spoken word album collaboration with Ben Folds, starred in the short-lived "$#*! My Dad Says" and essentially played himself on "Boston Legal."

They're not afraid to reinvent themselves

Up until a few years ago, Stewart was known either for "Star Trek," Shakespeare or his role as Professor X in the "X-Men" franchise. Now? He's a Twitter sensation, YouTube's foremost scholar on the "quadruple take" and a comedian — both in real life and on screen.

Which calls to mind "Star Trek: Voyager" star Kate Mulgrew or, as most people now know her, Red from "Orange Is the New Black."

There she's proven to be a powerful comedic force, an ace at a Russian accent and an actress capable of startling emotional depth. She also recently published a well-received memoir, "Born With Teeth."

They have an impish, child-like charm

And then there's Nichelle Nichols, who is 82.

She was one of the first black actresses to star in a television show, the original "Star Trek" series, which ran from 19661969. Since then, she has continued to reinvent herself as a musician, Broadway star and advocate for space exploration. All of that is pretty exceptional groundbreaking stuff, but she has also maintained a fun, youthful personality and she knows how to connect with the kids these days — through a Reddit AMA.

Nichols isn't even letting a mild stroke, which she suffered in early June, dampen her spirit. Interviewed by Entertainment Tonight recently, she reported, "I am as wild and woolly as I have ever been."

Patrick Stewart (and dancers) at the Los Angeles premiere of his new show, "Blunt Talk." Star Trek alumni have become the coolest older adults around, and Stewart is the de facto leader (hello, Capt. Picard).