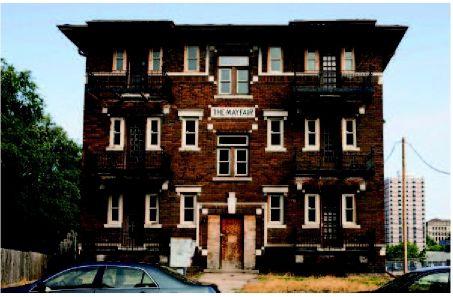 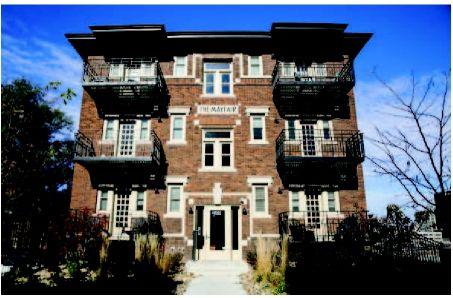 Before and after: At left, The Mayfair building at 2222 Howard St. before its renovation, and at right, the building now. It is part of the Flats on Howard development at 24th and Howard Streets. 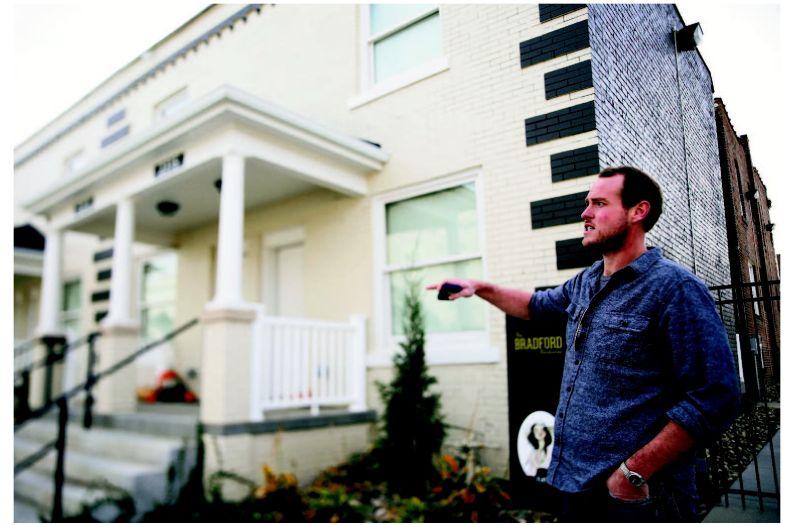 Property manager Brandon Johnsen at the Bradford Rowhomes on Dewey Avenue, which are part of the Flats on Howard development. The nearly 100year old buildings, until recently mostly vacant and vandalized, are now home to 155 apartments, most of which have tenants. 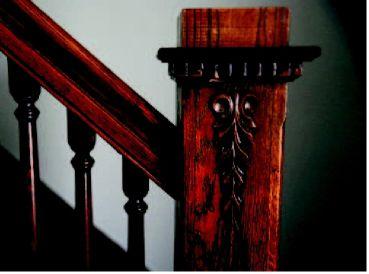 Developers of the Flats on Howard buildings saved historic features where they could, like original woodwork inside, and recreated the historic pieces that couldn't be saved.

Nebraska's new state historic tax credits are helping to save cool old buildings in sorry condition that have lingered on the periphery of urban Omaha revival.

You can see it at 22nd and Howard Streets, where once-dilapidated apartment buildings formerly plagued by vacancy, vagrancy and fires have been transformed into a hip haven for downtown workers.

You can see it at 38th and Farnam Streets, where the weary Colonial Hotel apartment building is undergoing a thorough renovation. Just across Farnam Street from the Colonial, the shuttered McFoster's Natural Kind restaurant is finding new life as a Dundee Bank branch with extensive renovations that recall the building's origins as a service station.

Meanwhile in Red Cloud, Nebraska, state historic tax credits are helping the Willa Cather Foundation renovate the Moon Block Building into the National Willa Cather Center. The other projects outside Omaha also include converting a former brewery in Hastings into affordable apartments.

Two developers in Omaha said they couldn't have done their projects that used historic tax credits as well — or at all — without them.

"It's just a great additional source of funds that helped make for a better development," Darin Smith said. He's a principal in Arch Icon Development, which used $2.3 million in state historic tax credits toward its $20 million Flats on Howard redevelopment on the western fringe of downtown Omaha.

Tom McLeay, president of Clarity Development, said the Colonial Apartments needed so much work that the project wouldn't have been financially viable without a boost from the credits.

"They really make these deals happen," said McLeay, who's using $1 million in historic tax credits toward the $8.2 million Colonial Apartments project. "We could not have done the Colonial without them."

Of course, real estate developers had been rescuing and renovating many old Omaha buildings before the Nebraska Legislature unanimously approved state historic tax credits in 2014.

Downtown Omaha has been coming back for decades, and midtown for a couple of years, with private investment aided by such public boosts as tax-increment financing, low-income housing tax credits and federal historic tax credits.

Still, developers pounced on the state historic tax credits the first year they were available, in 2015. The law authorizes up to $15 million in tax credits, with a maximum of $1 million per building, each year through 2022.

Developers quickly snapped up the 2015 allotment of $15 million. The demand has been lighter this year. The State Historic Preservation Office, part of the Nebraska State Historical Society, has allotted $8.9 million for 2016.

A University of Nebraska-Lincoln report found that the tax credit program "has already had a number of positive impacts on the Nebraska economy" in construction spending and wages.

The first 13 redevelopment projects to be completed using the program contributed nearly $80 million to the economy, mostly in construction, according to research led by Eric Thompson, director of UNL's Bureau of Business Research. The bureau did the research for the State Historical Society.

Those projects generated more than $35 million in wages, and $3.2 million in state and local taxes, the report said.

"In addition to seeing these historic structures renovated and put to more valuable use, you get a return in terms of economic activity and associated tax revenues," Thompson said.

They had been looking at two apartment buildings among a cluster of run-down structures near 24th and Howard Streets. Then, figuring that the two wouldn't fly as an island, they bought six more properties.

The properties are on a ridge, looking down into downtown. The YMCA and Omaha Children's Museum are within a couple blocks.

The area is on the National Register of Historic Places as an apartment district. For almost 100 years, the row of buildings served the purpose of providing reasonably priced downtown housing, including studio apartments with Murphy beds. But they had been rundown for more than 20 years.

"That whole block was in disrepair, underutilized and largely vacant," Smith said.

Only one building was occupied. Some of the buildings were not only vacant, they were abandoned, Smith said.

That's night and day from now.

Arch Icon went to work on the apartment buildings on Howard Street, and on a row of duplexes on Dewey Avenue nearby. They rebuilt the buildings from the insides out. They saved the historic features where they could, such as original woodwork inside and decorative terra cotta on the outside. Where they couldn't save the features, or they were gone, they replicated them.

In some cases, that was as simple as cleaning a building exterior to reveal the color-highlighted gargoyle faces and other festooning on the building at 2211 Howard. In other cases, such as decorative corners on that same building, it meant making new pieces that look like they were original.

The buildings are now home to 155 apartments under the banner of The Flats on Howard. All but a handful are rented. Many tenants work in restaurants or stores downtown, and many are young professionals.

Newlyweds Christina and Trevor LaPoint live in the Bradford Rowhomes on Dewey Avenue. She said they were drawn to the "homey" apartments with modern comforts and a historic look.

"We were interested in something with a lot of character," Christina LaPoint said. "We like the fact that instead of utilizing all new materials, they saved old buildings. ... It's unfortunate that our society says that when something's old or not working or broken, you just throw it away. We appreciate that they were willing to revitalize the area."

It's a slow process to apply for and win approval for the historic tax credits. The first year, when Nebraska quickly hit the $15 million maximum, it was competitive, so developers faced the prospect of going through the process and then not receiving the allocations.

McLeay, of Clarity Development, said he would apply again. But he said the program would be better if for-profit developers could sell 100 percent of their allotment, not only half as currently allowed, to raise money for their projects.

Smith said he's still working through the process with the Nebraska Department of Revenue to receive Arch Icon's 2015 tax credits.

"It's slower than we would have liked, but I'm not going to criticize the Department of Revenue for implementing a good program," he said, adding that he would "absolutely" apply again.

"You look at what we saved, and the character it restores in a historic downtown area, it's well worth it," Smith said. "And the life that it breathes back into an area, it's extremely well worth it."

Before and after: At left, The Mayfair building at 2222 Howard St. before its renovation, and at right, the building now. It is part of the Flats on Howard development at 24th and Howard Streets.

Property manager Brandon Johnsen at the Bradford Rowhomes on Dewey Avenue, which are part of the Flats on Howard development. The nearly 100year old buildings, until recently mostly vacant and vandalized, are now home to 155 apartments, most of which have tenants.

Developers of the Flats on Howard buildings saved historic features where they could, like original woodwork inside, and recreated the historic pieces that couldn't be saved.