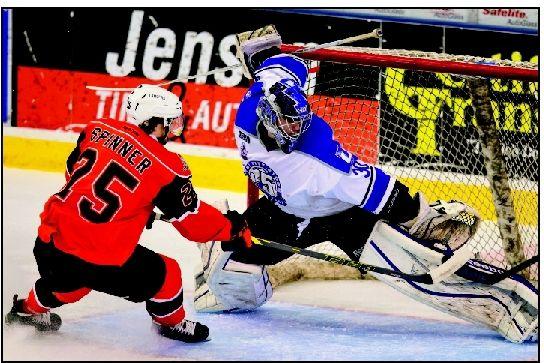 Omaha's Steven Spinner is unable to score against Tri-City goalie Alec Dillon. The Lancers managed just five shots on goal in the third period as Tri-City protected a one-goal lead. 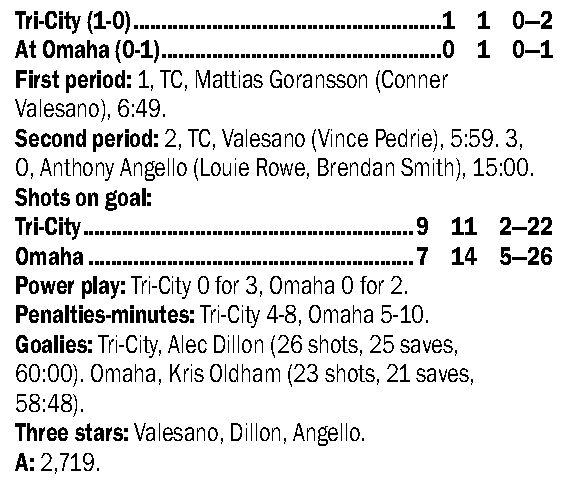 The second-seeded Storm scored early in the first and second periods, and now will return to their home ice with a chance to end the best-of-five series in three games.

Omaha will need to win at least one of those games to force a fourth game that would be played at 5:05 p.m. Sunday at Ralston Arena. Game 2 will be Thursday at Kearney's Viaero Events Center, followed by Game 3 on Saturday. Both games are scheduled for 7:05 p.m.

"At this point of the year, re-

suits are what matter," Lancers coach Brian Kaufman said. "Our effort was great for 60 minutes tonight and it was a great hockey game that lived up to everything we thought it would be."

The teams combined for just 48 shots in the game played before a Ralston Arena crowd of 2,719. Omaha had five shots in the third period and Tri-City just two.

Tri-City, with its one-goal lead, chose to focus on locking down Omaha's offense for the final 25 minutes.

Defenseman Mattias Goransson put Tri-City ahead 1-0 at 6:49 of the first period with his eighth goal of the season. It came 12 seconds after Omaha had killed the Storm's first power play of the game.

Both teams scored once in the second period precisely eight seconds after killing a power play.

The Storm struck first when forward Conner Valesano, who had the assist on Goransson's goal, got the puck in the left wing circle from defenseman Vince Pedrie. Valesano whipped a one-timer over Omaha goalie Kris Oldham's left shoulder at 5:59 for his fifth goal of the season.

Omaha got its goal 15 minutes into the second period when right wing Louie Rowe came charging out of the penalty box and waited for a long pass from left defenseman Brendan Smith. Rowe quickly moved into the left-wing circle and sent a shot that was slowed by Storm goalie Alec Dillon. The puck landed to Dillon's left, where center Anthony Angello knocked it in for his 20th goal of the season.

The Lancers pulled Oldham twice for an extra attacker, but the Storm found ways to keep the puck along the boards and away from Omaha's shooters.

"There were a couple of bounces that didn't go our way and there were a couple that did," Kaufman said. "Unfortunately, we didn't get enough of those tonight. But it's just one game and this is a five-game series, so we'll get ready to go Thursday."

Omaha's Steven Spinner is unable to score against Tri-City goalie Alec Dillon. The Lancers managed just five shots on goal in the third period as Tri-City protected a one-goal lead.