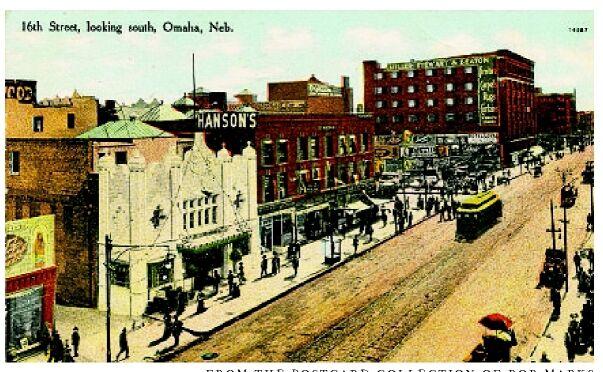 Tolf Hanson's Café Beautiful, shortly after opening in 1908. Construction is yet to begin on the City National Bank Building (now the Orpheum Tower) in the cleared area one block south. 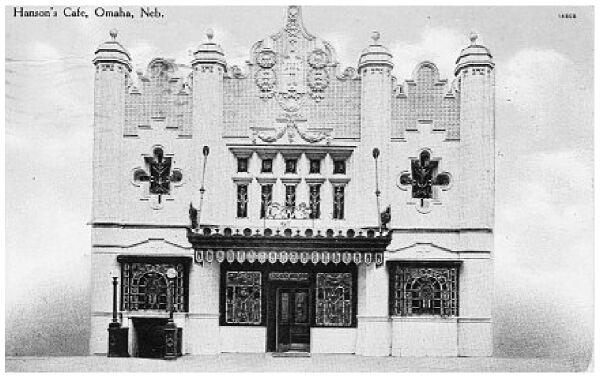 The elaborate façade of Tolf Hanson's Café Beautiful in 1908. The "TH" monogram in the terra cotta at top center has long since been removed.

Tolf Hanson was born in Vanersborg, Sweden, on June 13, 1864, and immigrated to Omaha in his late 20s. In November 1893, he opened the Calumet Café at 1411 Douglas St. The business prospered for the next 15 years, prompting Tolf to fantasize that he could afford to create the finest restaurant in Omaha. Located at 315 S. 16th St., he called it Café Beautiful, and from all accounts, it was aptly named.

Unfortunately, Hanson spent wildly on building modifications, equipment and furnishings, an outlay he would never recover. He might have had a premonition of misfortune to come when, even before the formal opening, a delivery man died when his head was crushed in the restaurant's newfangled dumbwaiter.

When Café Beautiful opened in the fall of 1908, the Omaha Bee gushed about it as "the ultimate form of well-nigh perfection" and "something that neither New York nor Chicago could exceed."

In 1908, Tolf ("twelve" in Swedish) was on top of the world, but in getting there, he had burdened himself with enormous debt and operating expenses. For a short time his continuing operation of the Calumet kept him afloat, but it was said that there was not a day when his Café Beautiful made a profit.

By July 1909, Hanson's creditors had organized, and more than 100 of them were clamoring for payment. In response, Hanson left Omaha, desperate to raise funds in New York City. He would never return.

On Aug. 31, 1909, a headline in the Bee read, "TOLF HANSON IN DEEP HOLE." Formal bankruptcy proceedings had begun. The next day, he was found in his bed in a NewYork City lodging house, dead of inhalation of "illuminating gas."

It has long been thought that he committed suicide, but, in fact, in October 1909, a New York coroner's jury ruled his death an accident! The jury found that the preponderance of evidence was that Hanson "made singularly few preparations" for a suicide. For instance, one of his windows was left partially open. Some of his friends and relatives insisted that he was a sleepwalker, and that somnambulism led to his demise.

There are some poignant and mysterious postscripts to this story. On Dec. 28, 1910, Hanson's mother, about 80, was discovered lying in her bed in the Plattsmouth Masonic Home, unconscious, with the gas turned on. She recovered, but one can't help but wonder about the similarity to the circumstances of her son's death.

Another unlikely incident was recounted by Alexander Payne, the Oscar-winning filmmaker from Omaha, to a Restoration Exchange tour group I joined at the King Fong building on May 18, 2019.

Payne and longtime friend Dr. Ann Beeder bought the building on Nov. 6, 2007, while the King Fong Café was still going strong. Of course, it was the very building once occupied by Café Beautiful, so the owners had become interested in Tolf Hanson's story.

While in New York City, Dr. Beeder was browsing a flea market and happened to glimpse a ring with an engraving that seemed familiar. She bought it and was later astounded to find that it was, indeed, a ring that Tolf Hanson owned and wore when living, engraved with his distinctive "TH" monogram.

It seems far-fetched that he would have pawned it to raise money for his living expenses. If he was wearing the ring when he died, the possibility that there was robbery and foul play in connection with his death has to be considered.

The King Fong Café first welcomed hungry downtowners to its marbled staircase in September 1920. Upon reaching the second-floor dining room, one was transported to far away Cathay, just as was our tour group almost 100 years later. The authentic camphor wood carvings, hand-carved teakwood tables with inlaid mother-of-pearl, silk embroideries and stained-glass front window were all still there.

Best of all, our group was treated to a tour of the third-floor dining area, which has been closed since the 1950s. Its enclosed booths evoke clandestine rendezvous, or meetings of the Tong, where illegal liquors flowed like the river Yangtze.

It may well have served as a speakeasy, although there was little need for circumspection in Omaha during Prohibition. To illustrate, a well-known joke of the time went something like this: An out-of-towner stops a citizen in downtown Omaha and asks him, "Where can a fella get a drink around here?" The Omahan replies, "D'ya see that millinery shop just down the street?" The thirsty rube says, "Oh, can I get a drink there?" and is slapped on the back and told, "No, it's the only place where you can't!"

The King Fong served its last Cantonese dinner in 2017. Last, that is, unless and until the co-owners can bring its sweet and sour scrumptiousness back. 'Tis a consumption devoutly to be wished. Remember the chow mein!

And what, you might ask, became of Tolf Hanson's cash cow, the Calumet Café? After Hanson's death, his protégé and brother-inlaw, Sid Swanson, bought the Calumet's equipment, leasehold and goodwill from the trustee in bankruptcy for $26,500.

Payne filled me in on the rest of the story: "My grandfather Nick Payne, a Greek immigrant, purchased the Calumet Café in 1920 from Sid Swanson, and ran it as the Virginia Café for nearly 50 years. By the time it went out of business due to a tragic fire in 1969, it was famous as the 'oldest and largest 24-hour restaurant west of Chicago.' "

Many thanks to Alexander Payne and Ann Beeder for sparking my interest in this story, and for weighing in on this column. Valuable information was furnished to me by distant relatives of Tolf Hanson — Wendy and Lon Olson, and Sherry Neese. I am also indebted to the late, great Orville Menard for the Prohibition gag.

Next week: Boys Town's Greatest Hits Bob Marks lives in Omaha, where he sleuths for local history and delights in busting myths and setting the record straight. He writes weekly for The World-Herald. Reach the Omaha History Detective through his editor, chris. christen@owh.com; 402-444-1094.

Tolf Hanson's Café Beautiful, shortly after opening in 1908. Construction is yet to begin on the City National Bank Building (now the Orpheum Tower) in the cleared area one block south.

The elaborate façade of Tolf Hanson's Café Beautiful in 1908. The "TH" monogram in the terra cotta at top center has long since been removed.