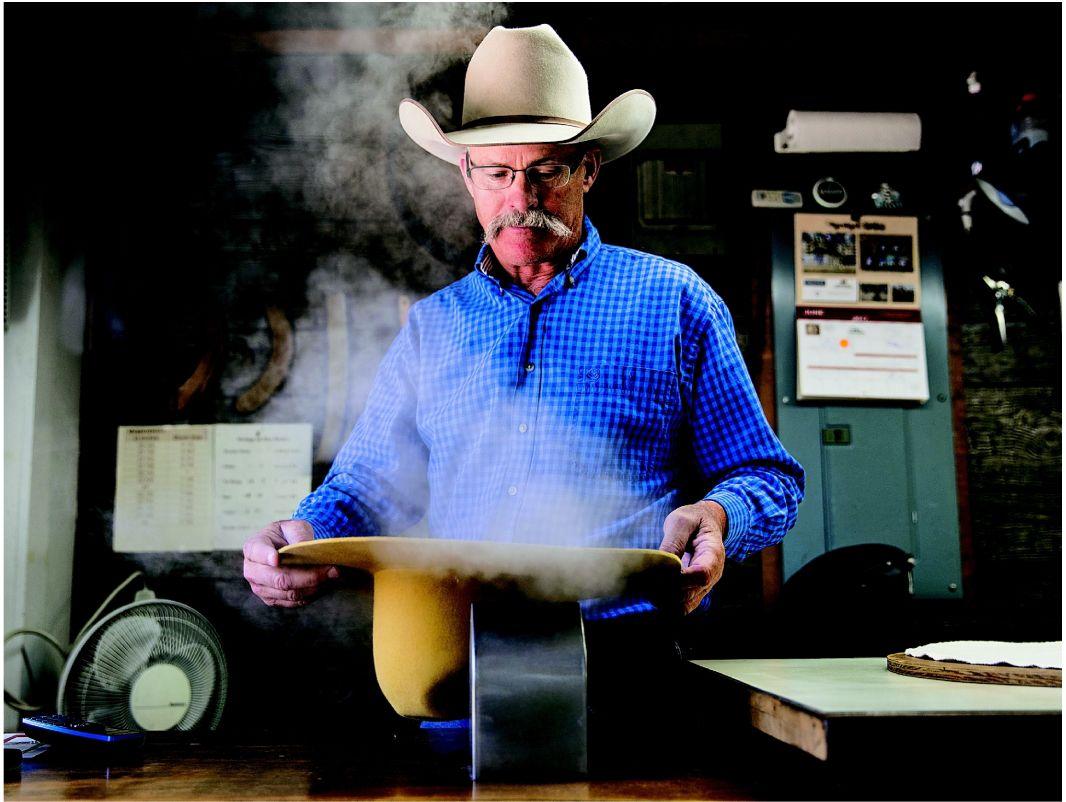 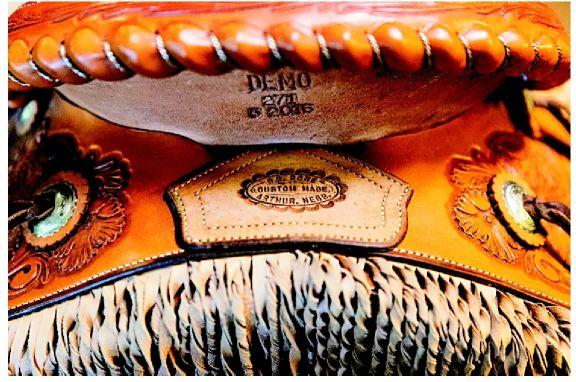 Above, leatherwork by saddle maker Dennis Rose at Rose Saddlery in Arthur, Nebraska. At top, custom hat maker James Marshall, who also works out of Arthur, dry-steams a hat body to soften the material. Both have been interviewed by folklorist Josh Chrysler for a project by the Nebraska Folklife Network focusing first on western Nebraska. 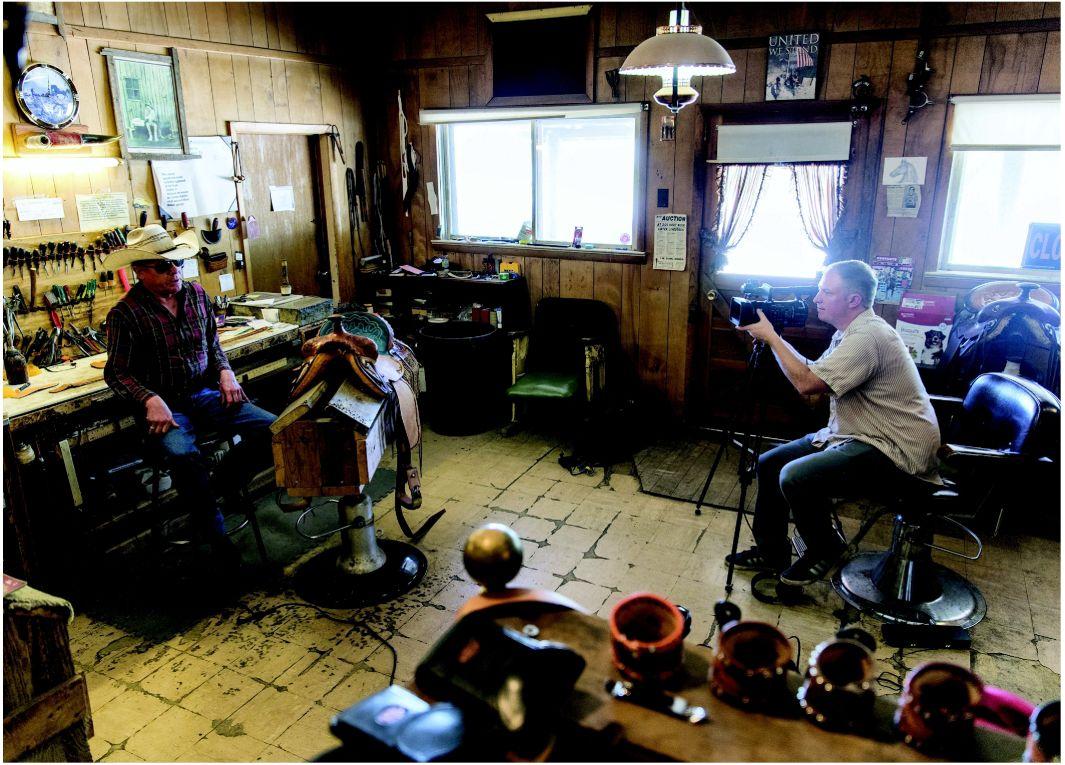 Josh Chrysler, right, interviews saddle maker Dennis Rose in Arthur, Nebraska, for the Nebraska Folklife Network. One long-term goal of the project is to compile a roster of traditional artists willing to accept apprentices in the hopes of passing on their specialized knowledge. Among those Chrysler has sought out: beadworkers, wheat weavers, silversmiths and water witches. 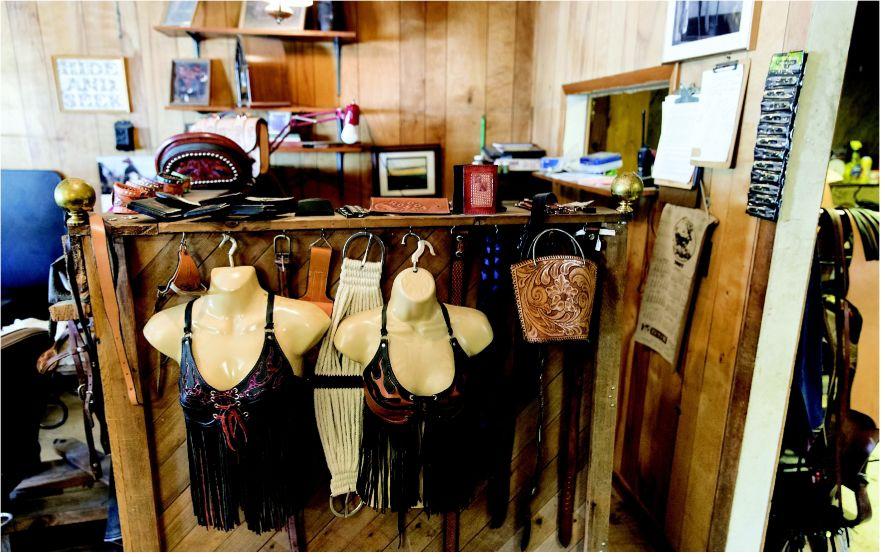 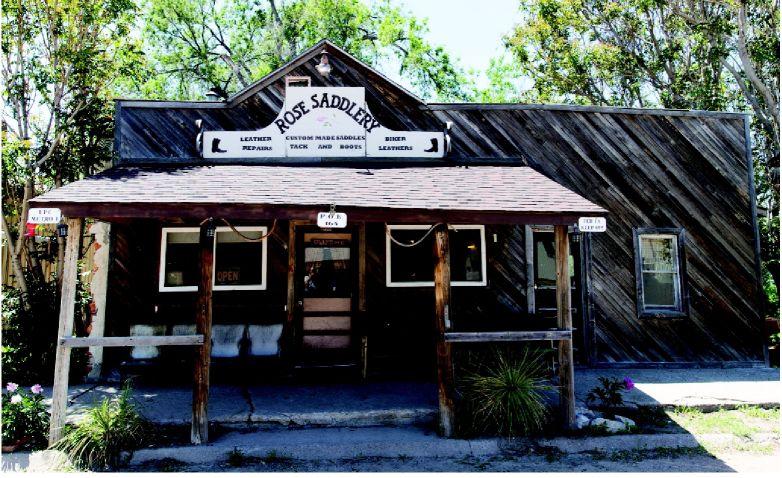 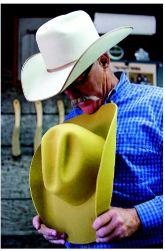 Clockwise from left, Dennis Rose's shop; leatherwork by Rose, including bags and women's tops; James Marshall at work on one of his hats.

ARTHUR, Neb. — It was the smell — the rich, sweet scent of leather — that captivated Dennis Rose decades ago when he visited a saddle maker's workshop with his dad.

Rose would go on to study saddlery: first as an apprentice in Ogallala, Nebraska, and later at a special school for saddle craftsmen in Amarillo, Texas.

He learned a certain style, with deeply inlaid designs, unique to Nebraska. And eventually he opened his own shop, Rose Saddlery, in his hometown of Arthur, about five hours west of Omaha.

But the 40 years since have changed the craftsman and his trade. Rose has numbed to the smell of leather - "It's been a few years since I could smell it," he said recently — and fewer and fewer customers come by seeking saddles. Increasingly, Rose, 60, spends his days crafting more in-demand leather goods: cellphone cases, business satchels, motorcycle seats.

"I was born about 50 years too late," Rose said earlier this month to a visitor with a camera who was there, perhaps, to save his trade from the dusty shelf of history.

The Lincoln-based Nebraska Folklife Network is endeavoring to find and document people like Rose: artists and craftsmen with skills that reflect the cultures and traditions of western Nebraska. To do so, the group hired a folklorist named Josh Chrysler and tasked him with traversing the region to film interviews with at least 30 of the "tradition bearers."

He has sought out beadworkers and wheat weavers, silversmiths and water witches. And on a recent day he traveled to the tiny town of Arthur, population 116, to meet with Rose, the saddle maker, and James Marshall, a custom hat maker, adding to his repertoire a pair of "cowboy artists."

The goal of the Landscapes Project, said Gwen Meister, executive director of the folklife network, is to gather photos, video and other educational material to share online and in public presentations beginning in the fall.

But the project also serves as a Noah's Ark, of sorts, preserving the names of people trained in disciplines that may be b e c om i n g increasingly rare. One l o n g t e rm goal is to compile a roster of traditional artists willing to accept apprentices in the hopes of passing on their specialized knowledge.

"I think that Nebraska's cultural history and heritage has kind of been under-researched for a very long time," Meister said. "If we don't know what's out there, how can we assist people in keeping those things? They're valuable treasures for all of us in the state to have."

The project is funded by a grant from the Cooper Foundation of Lincoln and matching money from the National Endowment for the Arts, the Nebraska Arts Council and theNebraskaCultural Endowment. Specifically, the survey covers three natural resources districts: the North Platte, the South Platte and the Twin Platte. Eventually the folklife network hopes to launch similar survey projects in other parts of the state.

"We know a bit more about what exists in (the eastern) part of the state," Meister said. "In the west, rightfully so sometimes, the people feel a little bit left out of things. So we wanted to start there instead of starting here."

So that's why Chrysler found himself driving through Arthur on a hot afternoon in early June.

That day, when he drove past a fence post topped with a cowboy hat, he knew he'd arrived at the right place.

Marshall, 58, started Marshall Custom Hats about 16 years ago. Before that, he explained to Chrysler, he ran a fencing company in Arthur. But in 2000 he slipped and fell into a rodeo pen, and a bull broke Marshall's back. His fencing days were over.

He'd heard there was a custom hat maker in the Sand Hills who had recently died. It was a job Marshall thought he could learn.

Chrysler set up a camera and filmed as Marshall told how he had learned the trade, studying under hat makers in Idaho and Montana. Now, years later, he has hats in almost every state and some overseas. He once made a hat for Jeb Bush when Bush was governor of Florida.

Was it difficult to learn the craft? Chrysler wanted to know. What are the different styles? What sets a great hat apart from the rest?

Marshall demonstrated for Chrysler how he molds an unfinished hat body, made with varying amounts of beaver felt, into one of his custom products.

He held a hat body over a dry steamer to soften the material. Then, with slow, precise movements, he folded different creases in the crown: the common "cattleman's crease" and two divot-like "mule kicks."

The most difficult part of the process, he said, is learning how to sand the material to the perfect consistency. And he didn't necessarily want to discuss his technique in detail with Chrysler — a businessman's secret.

Marshall was interested in taking on an apprentice, he told Chrysler, but only if the apprentice was serious about learning the trade.

When they finished, Chrysler drove less than a mile down the street to Dennis Rose's shop.

Rose showed Chrysler the new leather products that now occupy much of his time. When he started, he said, new saddles accounted for about 80 percent of his business. These days, it's probably 5 to 10 percent.

Younger riders are buying cheaper, mass-produced saddles, he said. And older folks, who might otherwise be willing to shell out for one of his saddles, are giving up horses altogether in favor of four-wheelers.

"It's going to keep progressing that way," Rose said. "It's sad to see the old way go."

At a recent saddle makers invitational held in Wyoming, a man warned Rose that his work was beginning to lose its distinctive regional flair. In Nebraska, Rose said, a saddle's tooling — the designs set into the leather — can be so deep "you can see it across the corral."

But Rose is encouraged by the work he sees elsewhere. There are people — young people — who want to learn, he said. He's had a few apprentices over the years, and he agreed to more, should the folklife network find someone willing.

Before he left, Chrysler asked Marshall and Rose the same question he asks everyone he interviews: "Do you know anyone else I should talk to?"

Chrysler ended up spending a little extra time in Arthur that afternoon. There's a guy in town who makes bits and spurs, he learned.

So, of course, he had to track him down.

Above, leatherwork by saddle maker Dennis Rose at Rose Saddlery in Arthur, Nebraska. At top, custom hat maker James Marshall, who also works out of Arthur, dry-steams a hat body to soften the material. Both have been interviewed by folklorist Josh Chrysler for a project by the Nebraska Folklife Network focusing first on western Nebraska.

Josh Chrysler, right, interviews saddle maker Dennis Rose in Arthur, Nebraska, for the Nebraska Folklife Network. One long-term goal of the project is to compile a roster of traditional artists willing to accept apprentices in the hopes of passing on their specialized knowledge. Among those Chrysler has sought out: beadworkers, wheat weavers, silversmiths and water witches.

Clockwise from left, Dennis Rose's shop; leatherwork by Rose, including bags and women's tops; James Marshall at work on one of his hats.