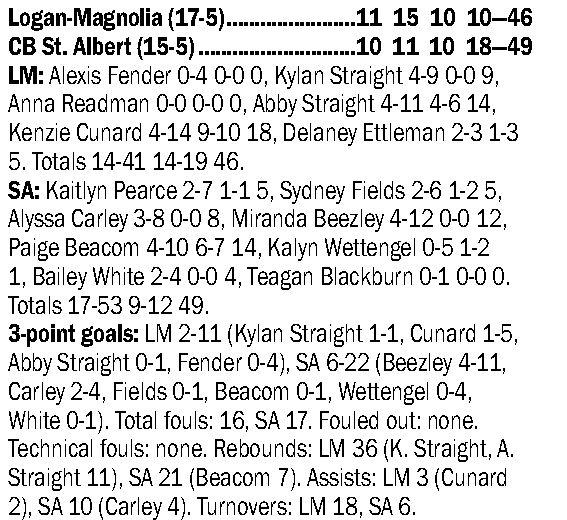 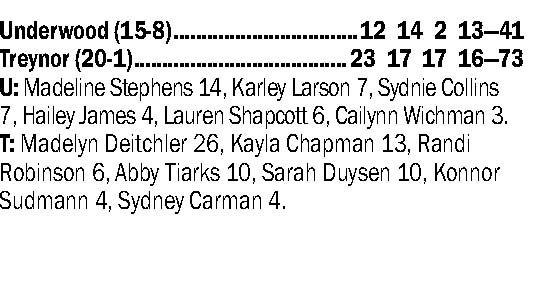 COUNCIL BLUFFS — Council Bluffs St. Albert's leading scorers were getting hounded. With the season on the line, their teammates showed they could rise to the occasion.

Through three quarters Tuesday night, seniors Paige Beacom (19.5 points per game) and Alyssa Carley (15.4) had 12 combined points. They slogged through a flurry of box-and-ones, triangle-and-twos and any other defensive scheme Logan-Magnolia could think to throw at them.

But a balanced offensive effort from more unsung players kept the Saintes within five points entering the fourth quarter. Beacom and Carley found their shooting touch from there, and the Saintes survived to win 49-46 in an Iowa Class 2-A, Region 8 quarterfinal at St. Albert High School.

"Once it got to the final moments, we knew this was not our last game," said Beacom, who ended with a team-best 14 points and seven rebounds. "We knew whatever we had to do to win, we had to do it — there's no other way around it."

Senior Miranda Beezley (3.7 points per game) hit on three of her first four 3-point tries and finished with 12 points. She swished a 3 to open the fourth quarter that started a 10-2 run to put the Saintes ahead 41-40.

"I just knew that when it came down to district play that (opponents) were going to be on Alyssa and Paige and someone else was going to have to step up and hit shots," Beezley said. "Senior year, it just came down to heart. I don't know. They were leavingme open, so I might as well shoot."

"It can't just be a two-person game," St. Albert coach Dick Wettengel said. "We have to have others-in whatever way they can do it — chip in and help. It's not always going to be your stars."

St. Albert went into a stall game from there. The tactic paid off, resulting in a Sydney Fields layup on a feed from Bailey White before Fields hit White on the next trip to make it 47-42.

Logan-Magnolia's Kenzie Cunard collected her 17th and 18th points with free throws in the final minute. After St. Albert missed the front of a one-and-one, Kylan Straight drove for a layup to cut the lead to 47-46.

Beacom then hit two free throws with 11 seconds left, and Cunard's long two-pointer fell short at the horn. The result sets up a 2-A regional semifinal Friday night in Treynor between St. Albert (15-5) and the 11th-ranked Cardinals (20-1).

"It's something I think both teams and both communities have been looking forward to all year," Wettengel said. "It should be a great atmosphere Friday night between two teams who have had very good years so far."

Madelyn Deitchler was a workhorse for the Cardinals, scoring a game-high 26 points, including 22 in the first half.

Treynor took a 40-26 lead into halftime and came out firing after the break. The Cardinals outscored the Eagles 17-2 in the third quarter.