Omaha Westside's Jake Meyers slides safely into second base as Papillion-La Vista's Jack Kalina waits for the throw in the bottom of the first. No. 1 Westside won the A-l district final 9-1. 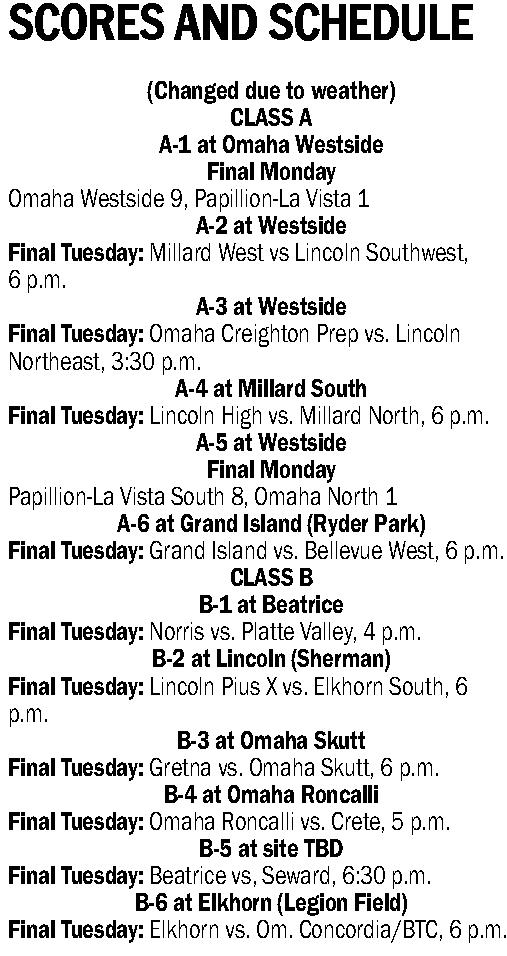 A district championship and the top seed in the upcoming state baseball tournament.

The No. 1 Warriors rolled to a 9-1 win over visiting Papillion-La Vista in the District A-l final. Westside, the defending Class A champion, will seek to defend its title when the state tourney begins Saturday in Lincoln.

"This is big for us," Warriors coach Bob Greco said. "The kids came out tonight and played hard."

The game was one of the few district finals that went on as scheduled Monday night, thanks in large part to Westside's artificial-turf field. Conditions weren't exactly balmy with the temperature in the mid-40s.

The Warriors (30-3) went to work in the first inning against Monarchs starter Trevor Jurjevich. Alex Nielsen drove in a run with a sacrifice fly and Will Patterson had an RBI single to stake Westside starter Jake Meyers to a 2-0 lead.

That advantage grew to 6-0 in the second on four hits and one error.

Devin Stueck had a run-scoring single, Mitch Hagan drove in two with a double and a fourth run scored on an outfield error.

Westside added three more runs in the third on an RBI double by Drew Fitzmorris, a sacrifice fly by Meyers and a wild pitch.

Jackson Rose, Westside's fourth pitcher, finished off the win by pitching the seventh. The Monarchs (17-14) put their first two batters on base but Rose retired the next three as the Warriors clinched the district crown.

Meyers, a Nebraska recruit, said the team is looking forward to its return to state.

"This is another step in the road," he said. "We obviously want to get to that next level."

Meyers, Fitzmorris and Brock Nemecek each scored twice for the Warriors. Westside's pitchers had nine strikeouts, including six by Meyers in his three innings of work.

As the top seed in the state tourney, the Warriors — who have never won back-to-back titles — will play the No. 8 seed at 10 a.m. Saturday at Sherman Field. Determining that foe will have to wait until Tuesday because four of the Class A district finals were postponed Monday because of wet fields.

Grant Suponchick allowed two hits in six innings and Ben Palensky doubled and homered to lead Papillion-La Vista South to an 8-1 win over Omaha North in the district final.

The Titans will head to state for the seventh time while the Vikings will be denied a return after reaching the tourney last year for the first time since 1964.

"Reaching state has been a goal of our team all season long," Papio South coach Bill Lynam said. "The team worked hard and earned that trip with

Check out additional photos from the A-l district final between Papillion-La Vista and Omaha Westside.NEPrepZone.com

The Titans boosted their record to 22-10 while North finishes the season 9-11.

The A-4 final between Millard North and Lincoln High will be played at 6 p.m. at Millard South.

The A-6 district final at Ryder Park in Grand Island between Bellevue West and the host Islanders will be played at 6 p.m.

Omaha Westside's Jake Meyers slides safely into second base as Papillion-La Vista's Jack Kalina waits for the throw in the bottom of the first. No. 1 Westside won the A-l district final 9-1.