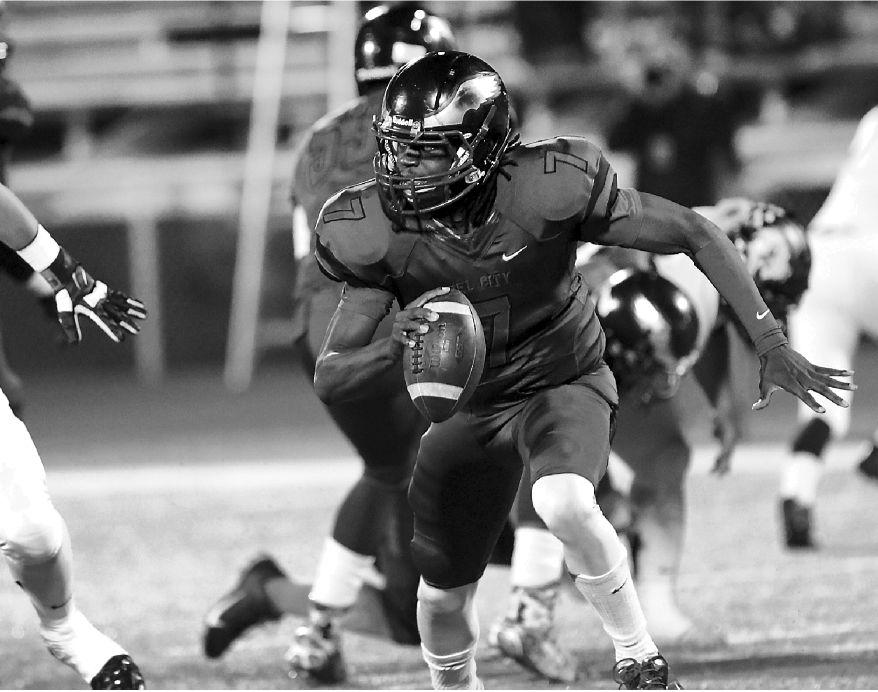 Former NU commit Terry Wilson, who was at Oregon with new Husker coach Scott Frost for a season, was at Garden City (Kan.) Community College last season and is now back on Nebraska's radar.

Twelve days remain before the Dec. 20 early signing period begins. New coach Scott Frost and his staff have worked at NU for a week. Two big official visit weekends await and, in between them, at least some coaches head back to Central Florida, their previous school, to help the Knights prepare for the Jan. 1 Peach Bowl.

Talk about a juggling act.

I don't think any recruiting analyst knows quite how it'll all shake out. If this new Husker staff can't reel in some prospects — five-star outside linebacker Micah Parsons told Rivals on Thursday that it was "too late" for Nebraska to get back into his recruiting process

— other prospects who never had NU offers before this week are now eyeballing the school.

For all the effort coaches put into a recruiting crush like this, the smartest play may be the safest one. Don't sign too many in the "whirlwind" class. Keep scholarships open for the "regime change" class of 2019.

Frost has time to build it the way he wants. So even if Nebraska has the wiggle room to bring in more than 20 signees, it might pay to be prudent.

This official weekend appears to be an aggressive approach, starting with Garden City (Kan.)

Committed to Nebraska in spring

2015. Switched to Oregon that fall because of Frost, who subsequently left. Wilson, after one year in Eugene, left, too, and went to Garden City. Now, he's looking at Nebraska again.

— who sent Lavonte David and others to Lincoln — has always done right by the Huskers. Sims compared Wilson to former East Carolina quarterback Dominique Davis, who passed for nearly

Wilson does have some similarities, but he's a faster straight-line runner than Davis. He'd fit well into Frost's offense as structured at UCF, although Frost can shape his scheme around the talents of his quarterback. Wilson has three years of eligibility remaining.

It's interesting to pair Wilson with Fresno (Calif.) Clovis West High School prospect Adrian Martinez, who's also planning to make his official visit this weekend. Martinez, a top-100 prospect according to ESPN, missed this season while recovering from a torn labrum. Martinez is ostensibly committed to Tennessee, but he may not land there.

Several other prospects appear headed to Nebraska for official visits this weekend. Though visits can change at the last minute

— these are kids, after all — various recruiting services and The World-Herald have confirmed the following:

The Arizona Western duo of Jaron Woodyard and Greg Bell. Woodyard, a built-but-fast wideout, had 36 catches for 522 yards and six touchdowns this season. The 5-foot-11, 180-pound Woodyard switched his official visit from Maryland to NU. Woodyard had previously visited UCF on Sept. 30 and Syracuse on Nov. 24. Bell — 6 feet, 200 pounds — rushed for 1,217 yards and 11 touchdowns this season. He had committed to Louisville for one month last summer, decommitted and visited Utah on Nov. 24. Arizona Western was a heavy outside-zone running team, and, in his Hudl highlight film, Bell showed good vision in finding the hole and good burst once he hit the hole. He appears to like contact, too.

Cedar Hill (Texas) High School athlete Joshua Fleeks, a consensus four-star according to the 247 Sports Composite service. Fleeks, a Baylor commit, has battled injuries this season, but he's a slot back who can take a bubble screen and scoot. Frost's offense has its share of quick throws. According to 247 Sports, Fleeks runs a 4.48-second 40-yard dash. That's probably why ESPN rates him as the nation's No. 153 overall prospect.

West Palm Beach (Fla) Oxbridge Academy defensive back C.J. Smith, a consensus four-star prospect who will be a tough pull for the Huskers. The 6-foot-3, 190-pound Smith has offers from Oklahoma and Alabama, among others, and still could recommit to Florida, where he was originally headed. Smith plays for Oxbridge, a private school funded by one of the Koch brothers. Husker linebacker Willie Hampton also played there for a season.

Talking to various recruiting experts and examining commit lists, several Frost assistants seem, at first blush, to be strong recruiters. One is Ryan Held, the former junior college head coach and former Husker walk-on. The few conversations I've had with Held — he was Joe Keels' junior college coach — have been excellent; he had a strong grasp of Nebraska's program at the time. Two sources — including Rivals' Woody Wommack — praised Held.

Defensive coordinator Erik Chinander has a varied background — Midwest native, Iowa grad, FCS assistant, Tennessee grad assistant, Oregon assistant, NFL assistant — that makes for a good recruiting eye. He's seen every level of the sport and done every kind of job — from back office grunt work to play-caller — on the food chain.

Defensive backs coach Travis Fisher, a UCF graduate, played eight seasons in the NFL, mostly with the St. Louis Rams, with whom he was briefly a teammate of ex-Husker Grant Wistrom. Frost kept Fisher on staff when he took the UCF job. Fisher, originally from Tallahassee, Florida, has strong contacts throughout the Southeast, but his NFL experience will help anywhere, including St. Louis, where a strong crop of 2019 prospects will be interested if Nebraska is.

Outside linebackers/special teams coach JovanDeWitt created an app while at UCF that helped coaches input and read on-the-fly assessments of prospects as coaches visited them.

"You try to find away to be as efficient as you can with your time," Dewitt said in one of UCF's "Rise and Conquer" promotional videos from 2016. "Along the way I figured it'd be a good idea to learn how to develop some apps and create different spreadsheets you need later. That's what I like to do. I like to tinker. I'm a science and math guy."

Who turned down a job atNASA.

Former NU commit Terry Wilson, who was at Oregon with new Husker coach Scott Frost for a season, was at Garden City (Kan.) Community College last season and is now back on Nebraska's radar.