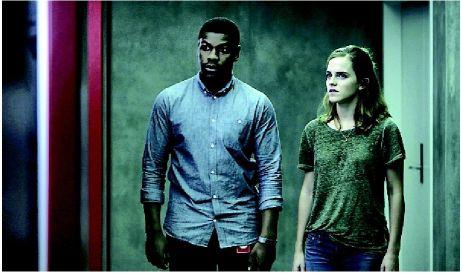 "The Circle," opening in theaters tonight, is nominally a sci-fi movie. But it's not that sci-fi. It's more a marginally exaggerated version of today than an astonishing view of tomorrow.

In the film (based on the acclaimed 2013 Dave Eggers book of the same name) Emma Watson plays Mae, a young woman who gets a job at a Google-esque tech firm called the Circle. At first, she loves working at the Circle, and she's especially inspired by its Steve Jobs-like founder, played by a bearded Tom Hanks. But then a mystery man (John Boyega) starts to open her eyes to the company's role in a far-ranging, privacy-shattering conspiracy.

"The Circle" isn't looking too far into the future, instead holding a mildly warped mirror up to the present.

But that's true of all good science fiction. Even the most far-flung and fantastical movies aren't merely giving us rocket ships and sentient robots: They're speculating about tomorrow in ways that reflect the hopes and anxieties of today.

Over nearly a dozen decades of sci-fi movies, some speculation has proved quite prescient. Some not so much.

Some movies got things very right and very wrong at the same time.

Here are some of the most eerily accurate predictions in speculative cinema. And some of the least.

The resemblance between the iPad and the tablets used by the Discovery One astronauts is undeniable. Hopefully the film's predictions about the dawn of an evil artificial intelligence don't come true.

The design of Captain Kirk's communicator clearly inspired that of the flip phone. Martin Cooper, the inventor of the first personal cellphone, said his design was influenced by the fantastical device.

In the film, Tom Cruise's character manipulates digital images by moving his hands. The full-body movements look like one heck of a workout, but a version of this tech is readily available, particularly in video game consoles.

Predicted: Self-driving cars We're still a ways away from automated personal transportation, but the technology is making strides. Hopefully we deal with it better than Arnold Schwarzenegger does, ripping "Johnny Cab" out of the driver's seat and taking back control from the robot.

We were promised time travel, but it doesn't exist and clearly never will. How else can we explain why no time traveler came back to prevent 2016 from happening?

Mass incarceration and for-profit prisons are certainly a thing now. But we have yet to see a world in which convicts are frozen for the entirety of their sentence. Other things the Stallone/Snipes movie got very wrong: the elimination of personal firearms and toilet paper, and every restaurant becoming a Taco Bell. Of course, the film does take place in 2032, so these things still have some time to come true.

Blade Runner, The Fifth Element, Back to the Future: Part II

Along with time-travel and robots, flying cars are a defining staple of futuristic sci-fi cinema. That they haven't yet become a reality is both deeply disappointing and probably a good thing. People are generally distracted drivers, often dangerously so. Adding flying to the equation seems like a bit of a miscalculation.