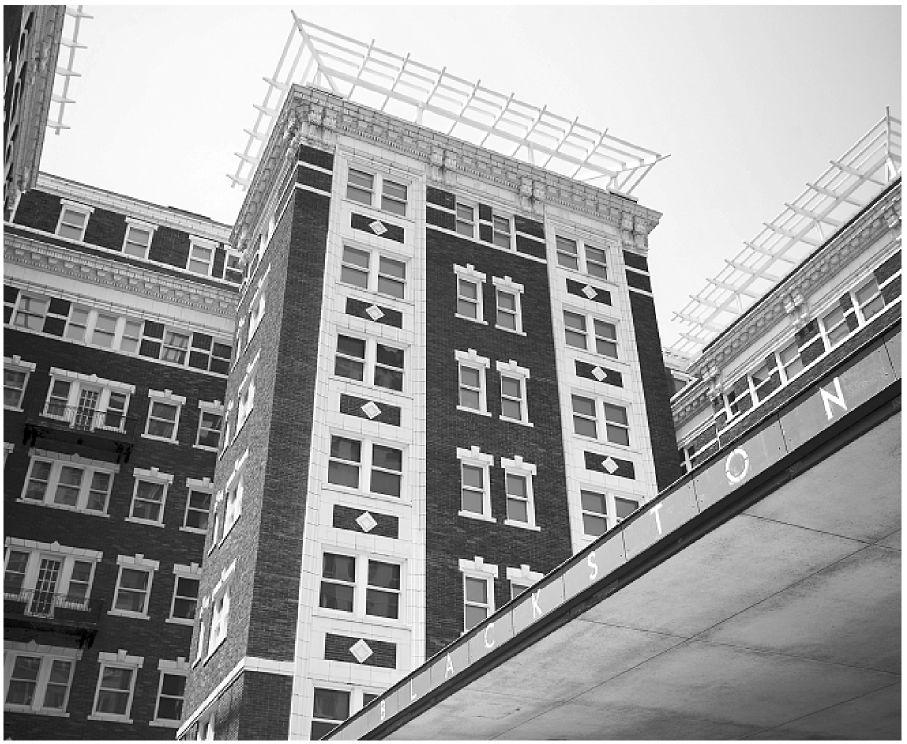 The next time you go out in the Blackstone District, you may see another tax on your bill for food or drink. And if you live in an apartment there, you may see your rent creep up.

That's because developers restoring the Blackstone Hotel want to charge a 1.95 percent additional tax on food and beverages within a several-block stretch of the hotel. They also want to charge $120 per apartment each year.

The extra money — generated from apartment renters and from diners at Mula, Dante Pizzeria and Crescent Moon and about 40 other establishments — would go to rehabbing the old hotel.

It's part of a city incentive under which the new 1.95 percent tax, the city's existing 2.5 percent restaurant tax and 7 percent sales tax.

Tom McLeay, president of Clarity Development Company, said the revenue is needed to redevelop the Blackstone into a boutique hotel. After closing as a hotel in 1976, the building more recently had housed Kiewit employees until a water main break last year and the building's sale.

The redone Blackstone Hotel would have 204 hotel rooms, plus the top-floor ballroom, a rooftop cocktail lounge, a coffee shop, a restaurant and conference center.

The new tax on food and drinks and fee on apartments are just two public incentives of several that the Blackstone developers are hoping to get if deemed an "enhanced employment area" by the city.

The Nebraska Legislature approved the creation of such areas a decade ago, but the City of Omaha didn't allow them in Omaha until last year. The downtown Capitol District and Topgolf near Westroads Mall have both received the OK to become such districts and charge extra tax. Each has different terms.

The Blackstone Hotel restoration and a project to renovate the downtown Landmark building into a high-end hotel are the next to apply. Their terms are different, too.

City Council Vice President Chris Jerram, whose district includes both the Blackstone and Landmark, did not respond to requests for comment.

Mayor Jean Stothert has signed off on both requests to charge the extra tax. Kevin Andersen, one of her economic development deputy chiefs of staff, described the districts as "market-driven optional taxation." Andersen said the boundaries are selected by the developer, for the most part.

Dante owner and chef Nick Strawhecker said the extra tax on food and drinks "bothers me a little bit" but he thinks it'll be good for the area in the long run, when the hotel opens and brings in visitors.

"Looking back at the restaurant tax, people were very concerned for a very short amount of time and then (the concern) went away," he said. That tax, which applies across the city, now generates more than $30 million a year that goes into the city's general fund.

Under the Blackstone request, the following new taxes would be charged and returned to the hotel project for improvements:

A3 percent tax on hotel rooms.

A 1.95 percent tax on food and beverages.

A 1.95 percent tax on retail sales and services, though that wouldn't apply to tenants under lease now. They would be excluded until they renew.

25 cents per square foot of commercial office space, which would increase 3 percent a year

$120 per apartment per year, which would increase 3 percent a year. McLeay said landlords would cover the fee on apartments, though Andersen said it would likely be passed on to tenants through increases in monthly rent.

McLeay said the neighborhood is supportive. His partners in restoring the hotel are Matt Dwyer and Jay Lund of Green Slate Development, which has developed the Blackstone District and owns much of the property there.

They don't own Brothers Lounge off 38th and Farnam Streets, which is not part of the proposed district and would not charge the extra tax. Trey Lalley, who coowns Brothers with his wife, Lallaya, said the developers never approached him about it and assumed that's because "they knew my answer" already.

"I think it's kind of ridiculous to look into the crystal ball and imagine all this new business" spurred from the hotel, he said. "It's hard to predict the bar and restaurant business."

Still, McLeay estimated the hotel could bring in 100,000 people a year, as guests or attendees at weddings, conferences and meetings. He said midtown today has very little meeting space, and the hotel will offer almost 10,000 square feet of meeting space.

In the case of the Blackstone, documents with the city show that the taxes would apply to about 40 addresses. The establishments stretch along Farnam Street between 38th and 40th and a handful are on Harney Street.

The new taxes would be collected up to 35 years or when $22.6 million is collected, whichever comes first, Andersen from Stothert's office said. After that, the tax would expire.

In all, the hotel project is expected to cost $77.5 million. The city has also approved $7.8 million in tax-increment financing, or TIF, for the project.

As for the Landmark request, for the office tower at 13th Street between Harney and Farnam Streets, the following would be charged and returned to the project. Developers want to turn some floors of the building into a hotel and include restaurants and a rooftop patio.

A3 percent tax on hotel rooms.

A 5 percent tax on retail sales.

25 cents per square foot of commercial office space, though tenants under lease now are excluded until they renew.

No extra tax on food and beverages.

The revenue is necessary to bring the Landmark building to life, said Jason Fisher of Omaha's Cushman&Wakefield/the Lund Co.

Most floors of the 15-story tower have been sitting empty.

"It's part of our capital stack," said Fisher, who's leading the charge on the building owned by Avaden Landmark LLC. "For us, (the enhanced employment area is) doing exactly what it's intended to do."

Andersen from Stothert's office said the taxes would be collected within the Landmark tower and at the existing parking garage.

The new taxes at the Landmark would end in 20 years or when $8.7 million is collected, whichever comes first. The Landmark project is anticipated to cost $62 million. The project is also seeking TIF, about $9.8 million.

Fisher pointed out thatmost people who would stay at the hotel — and pay the extra tax on rooms — would be from out of town. "I think it's a much easier discussion" than if most of the impact would be on Omahans, he said.

Both McLeay and Fisher said they've signed agreements with hotel franchises, but couldn't yet say who they are. Both hotels are aiming to open in 2020.

McLeay said interior demolition is set to begin at the Blackstone in October. At the Landmark, some office tenants have started to relocate, Fisher said. Construction there is set to begin in the spring.

McLeay doesn't anticipate the tax in Blackstone being a turnoff. He said the project will continue positive momentum in the area.

"This is a neighborhood effort," he said. "This is supported by this neighborhood. We are really excited to do this for the neighborhood and for the folks here."