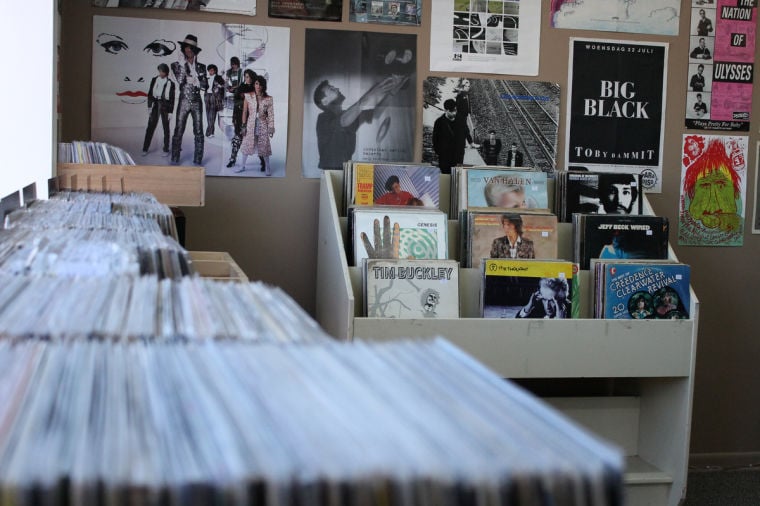 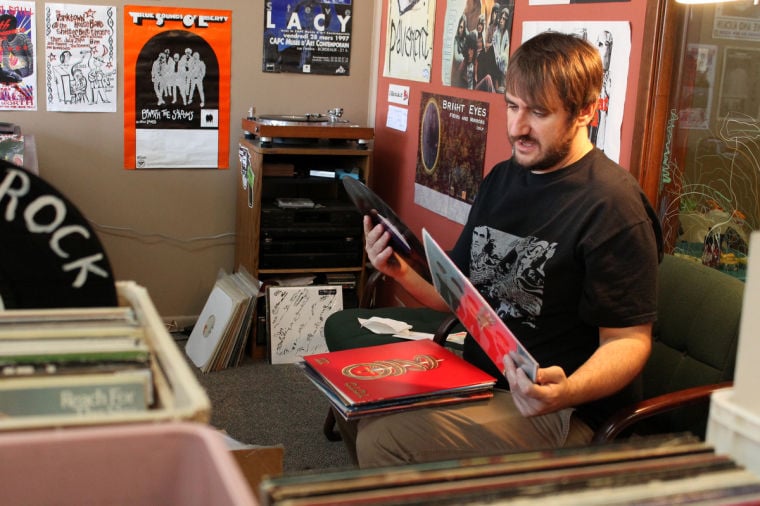 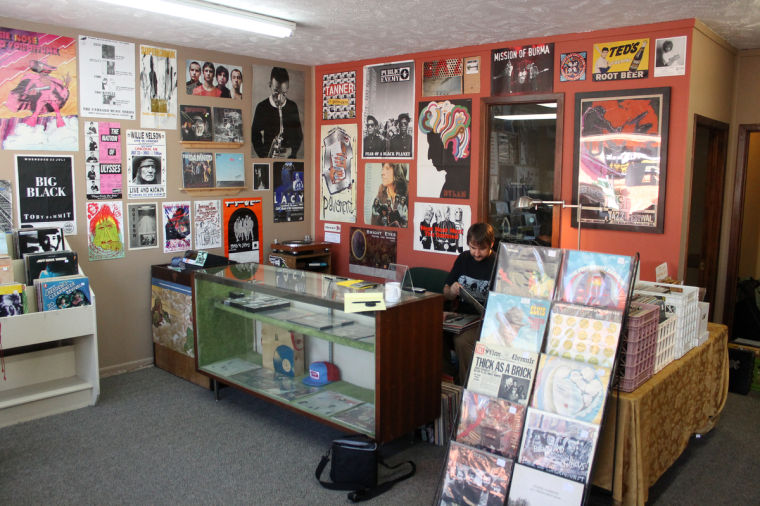 Brad Smith flips through records at his store, Almost Music, at 6569 Maple St. in Benson.

After years of working at local record stores, amassing his own personal collection and receiving plenty of goading from his fiancee, Brad Smith decided it was time to open his own shop.

After months of planning (and lots of time spent on Craigslist and at estate sales to find an inventory of used records), Smith, 39, has opened Almost Music at 6569 Maple St. in Benson.

With walls decorated in vintage rock posters and racks upon racks of vinyl, Almost Music is a spot where any collector (myself included) will feel at home.

Almost Music's selection veers more toward jazz, indie rock and punk, but most music fans will find something to their liking. Smith prides himself on quality, and even the records in the $2 bin are in good condition, so don't expect to find a heap of Huey Lewis and the News' “Sports” that will hiss and skip when you take them home.

Last week, Smith and I sipped coffee in the shop while he played Alabama Shakes and Dexter Gordon records. I was most curious why Smith would open a record store now when more shops have closed than opened in recent years.

Smith knows there's a niche for his store, which he said carries only records in good condition and quality. (Some of the prized pieces at the shop are a rare recorded play called “A Black Mass” and Conor Oberst's first tape, “Water.”)

He's been to lots of record stores over the years, and he's confident Almost Music will do well in Omaha.

Smith has the experience. In 1993, the late, legendary Dave Sink asked him to be a partner in Antiquarium Records, where Smith often went to blow all his money saved up from his high school job.

Smith remained at the store for several years until he and fellow Antiquarium partner Chris Deden broke away to sell records exclusively online. Sink was fond of saying, in only the way he could, “The Internet is the new CB radio. You guys are wasting your time.”

In the years since, Smith has worked at various “straight jobs,” as he called them, until he was laid off earlier this year.

“When (that happened), I didn't have an excuse,” he said.

In addition to used records, Almost Music also sells used books as a sort of satellite location for Jackson Street Booksellers. One half of the store is filled with used books from Jackson Street, whose main location is in the Old Market.

Almost Music's inventory is almost all used vinyl, but Smith will eventually carry new vinyl and CDs. Right now, the only new vinyl in the shop comes from local label Speed! Nebraska Records and various local bands. (Smith likes to affix hype stickers from old records that say “contains the hit single” or “recorded in stereo.”)

It's a great little spot that anyone interested in music could spend hours in sifting through some of the racks and babbling about rock 'n' roll. (It sort of reminds me of Championship Vinyl from “High Fidelity,” where one might hang out with fellow music heads, listen to the Beta Band and compile top five lists.)

In fact, Smith wants people to come into Almost Music to do more than just look for an album they want. Drinking coffee, talking about music and picking favorite releases is part of the experience.

“I want people to hang out and have a social experience,” he said.

A record for standing ovations might have been broken Saturday night at the Holland Center during an emotional and heartfelt tribute to retiring Omaha Symphony Music Director Thomas Wilkins.

Ned Beatty, the indelible character actor whose first film role in 1972's "Deliverance" launched him on a long career, has died. He was 83.

NEW YORK (AP) — Ned Beatty, the Oscar-nominated character actor who in half a century of American movies, including “Deliverance,” “Network” and “Superman,” was a booming, indelible presence in even the smallest parts, has died. He was 83.

Beyond 'In the Heights,' colorism persists in Hollywood and is rarely addressed

Every year, Hollywood faces criticism for its lack of racial diversity. But another pervasive problem also resurfaces: the lack of diversity in skin tone.

LONDON (AP) — Love it or hate it, tequila conjures up strong feelings in many drinkers.

Johnson admitted he isn't sure if he has "the patience" for the role, but he was flattered to discover that 46 percent of Americans would back him for the White House.

Jim Morrison, 50 years after his death: An edgy rock icon, a poet, beloved brother and web of contradictions

Few rock 'n' roll legends have had as enduring an impact on multiple generations as Jim Morrison, whose death 50 years ago next month at 27 made him an even bigger cultural icon than when he was alive. Yet, while his six-year tenure as the deep-voiced front man in The Doors created a quintessential template for brooding, bad-boy rock singers clad in leather and oozing primal sex appeal, ...

Brad Smith flips through records at his store, Almost Music, at 6569 Maple St. in Benson.