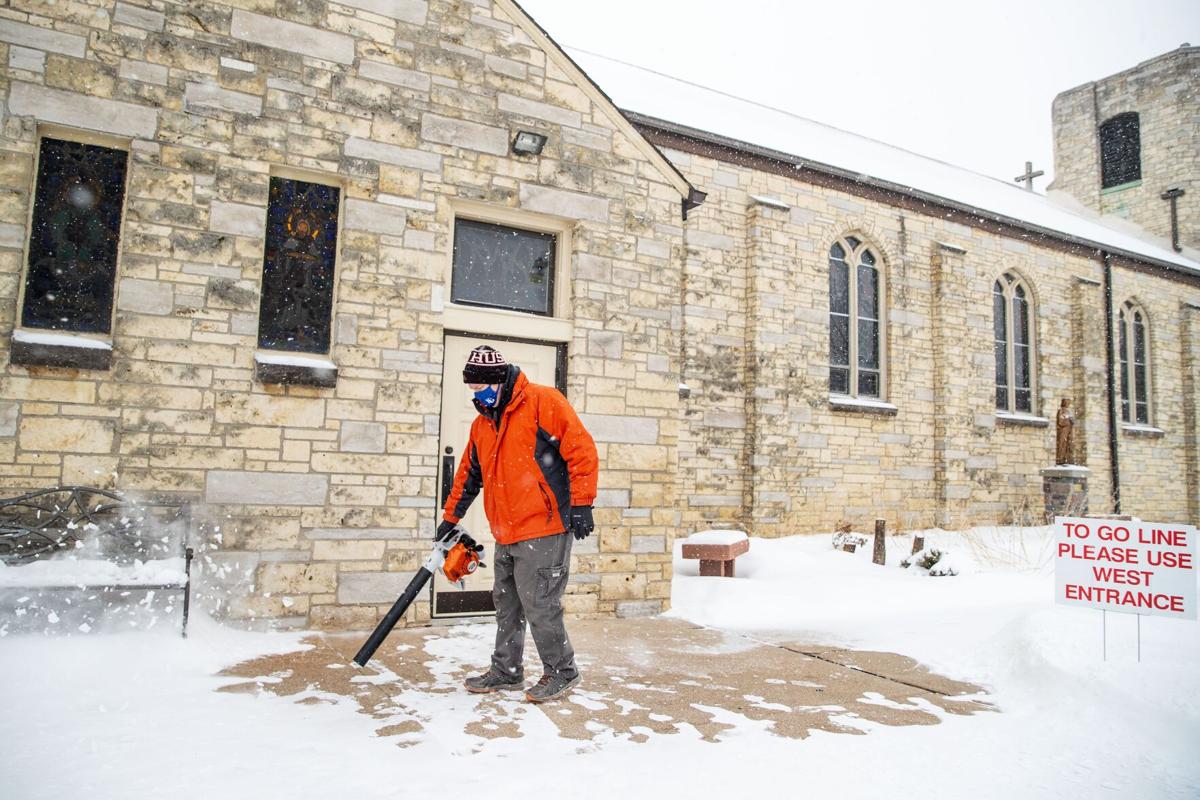 Jeff Belling uses a leaf blower to clear snow outside Holy Ghost Catholic Church on Friday. "The pre-Lent one is kind of our test run to make sure we have everything ready to go," said church business manager Carrie Kaczmarek. 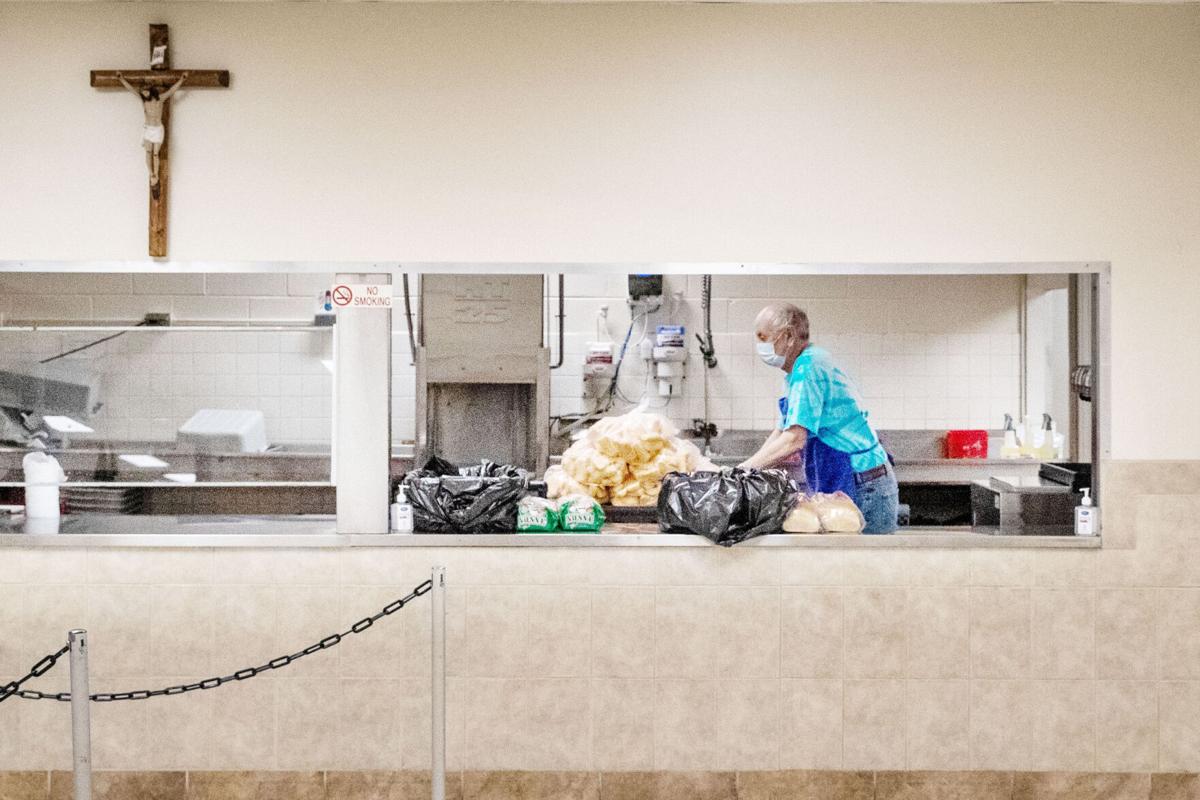 Michael Makara wheels bags of frozen fish while preparing for a fish fry at Holy Ghost Catholic Church on Friday. Like many others in the Omaha area, the event is takeout-only this year. 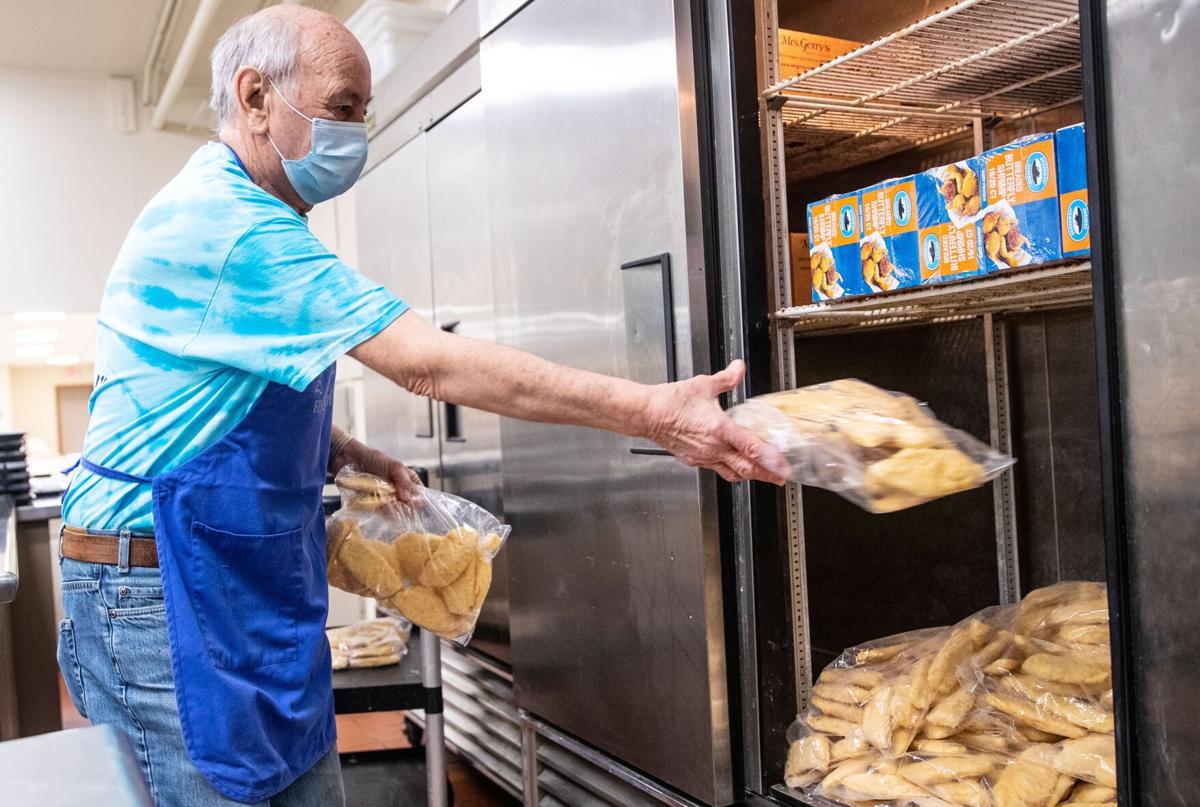 Volunteers like Makara come in a few hours before each fish fry at Holy Ghost Catholic Church. He's tossing bags into the fridge to prepare for Friday's fish fry. 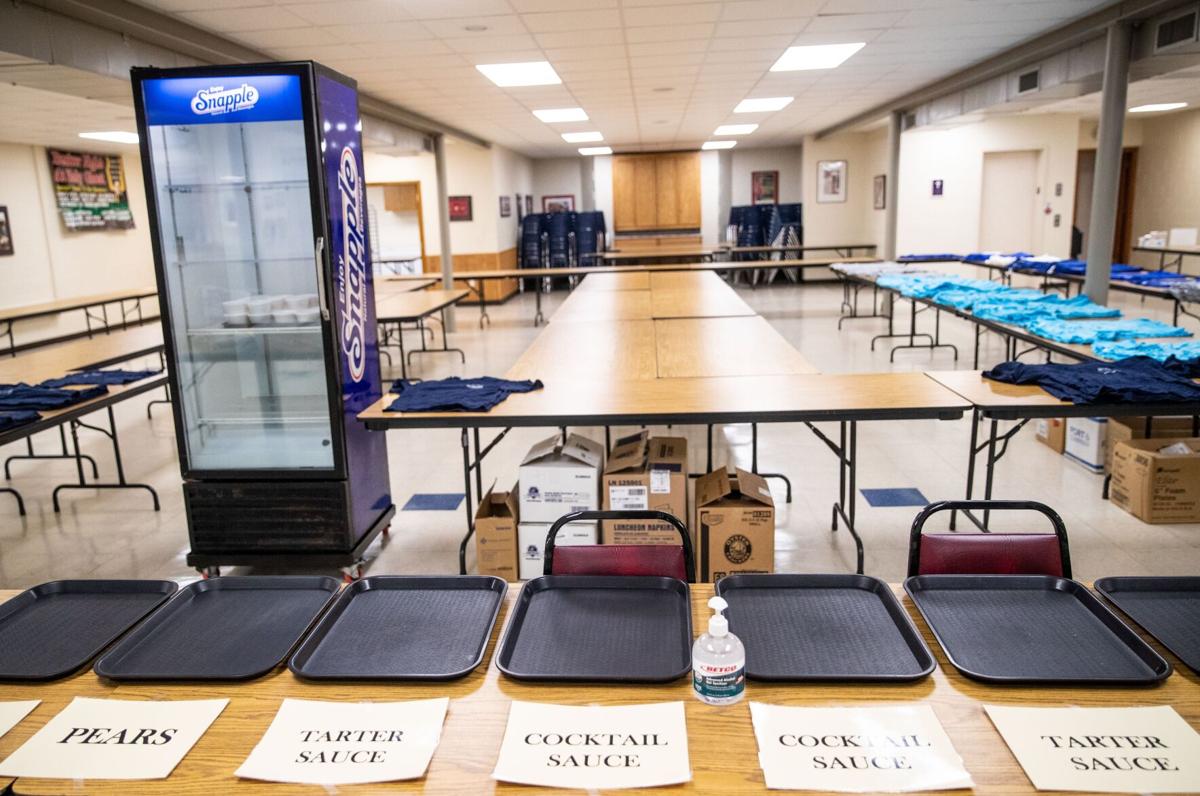 Trays are placed on a table for people to serve themselves at a pre-Lenten fish fry at Holy Ghost Catholic Church on Friday. 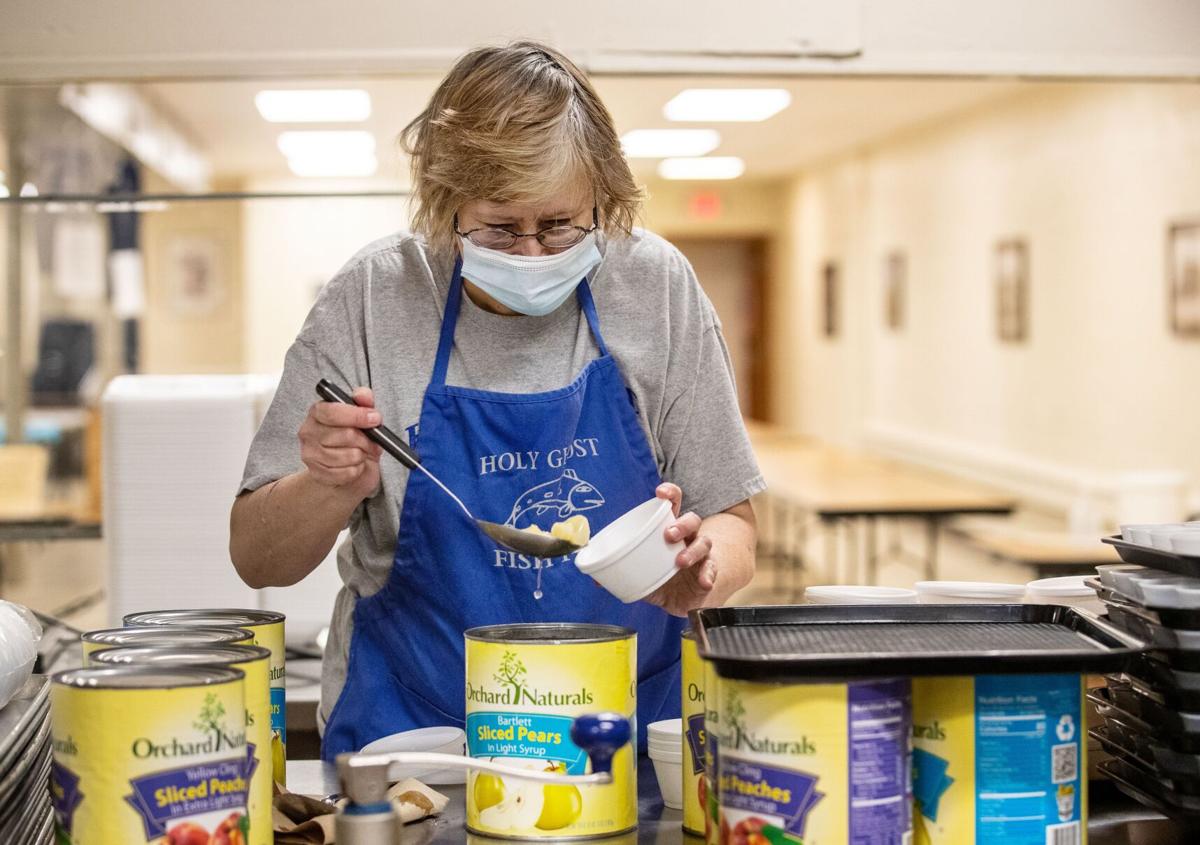 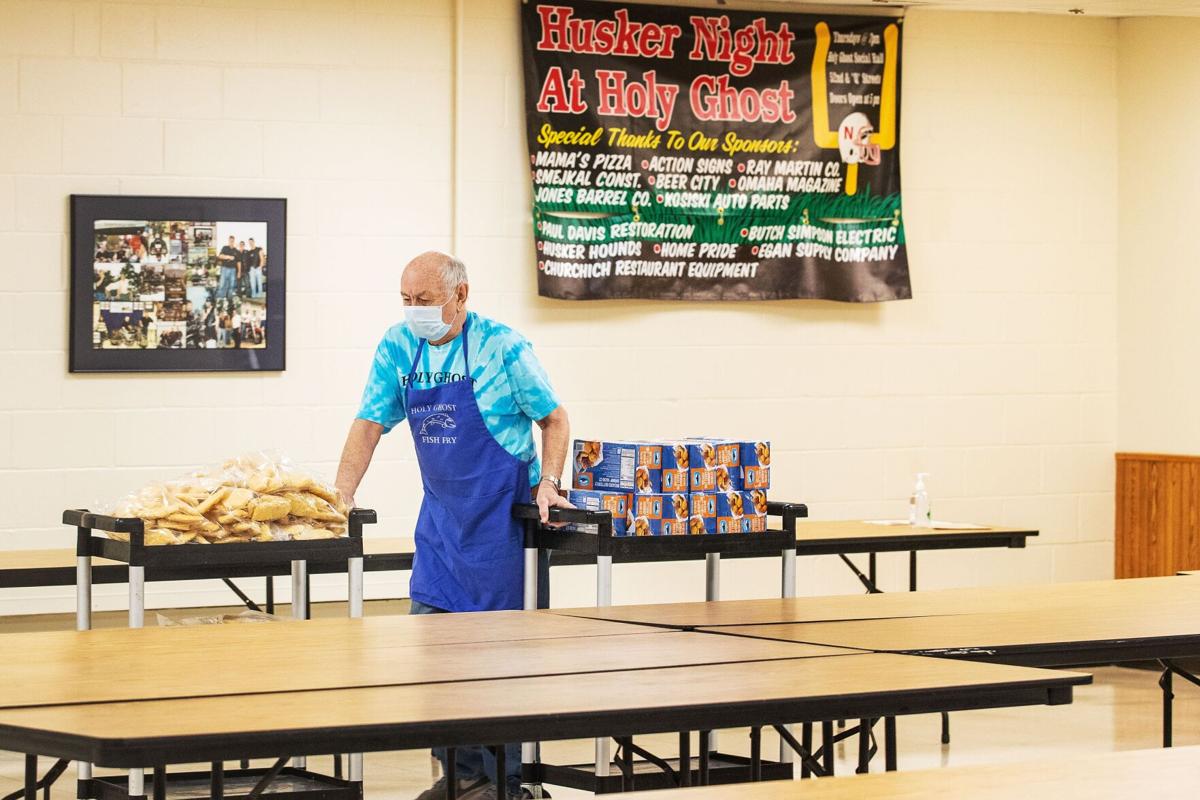 Michael Makara wheels bags of frozen fish and shrimp while preparing for a pre-Lenten fish fry at Holy Ghost Catholic Church. Church business manager Carrie Kaczmarek said her church is one of a few that serve shrimp.

“It’s gonna be a fish fry (tour) like no other,” said organizer Troy Pfannenstiel, who plans the tour each year for friends, family, co-workers and even people he has met in line at previous fish frys. “Every year it seems like more and more people get involved.”

Each winter, he makes a schedule of tour stops, posts updates for his 200-plus followers on the private tour Facebook page, gets out his “Thank God It’s Fryday” socks and prints commemorative T-shirts.

The routine has had some twists this pandemic year.

For starters, the 2021 tour slogan is “The one where everything is Drive Thru.”

He came up with his, ahem, catchphrase after he contacted churches across the city in January and learned that there would be few, if any, traditional fish frys with crowded dining rooms, free-flowing beer and close-knit camaraderie.

Out of necessity, Omaha fish frys in 2021 will generally be takeout-only, with many offering drive-thrus and curbside pickup.

They’re eschewing dessert tables, sales of pickle cards and chances at the meat wheel, which were good moneymakers.

And some churches have canceled fish frys altogether, like Holy Name (arguably the most famous) and St. John the Baptist in Fort Calhoun.

Parishes that skipped this year say they believed that the logistical challenge of social distancing — and a dearth of ways to keep patrons and volunteers safe — were too hard to overcome.

“You can’t move the fryers,” she said. “That’s elbow-to-elbow work.”

There are innovations among the fish frys that remain, all designed to keep people safe.

St. John Vianney in Millard is adding online ordering with touchless pay through the Square platform. It’s expected to go live this weekend with plenty of time before the first Lenten fish fry on Friday.

“You select what you want through pictures, specify a time to pick up, and we will be able to run it to your car and you can drive through,” said Brian Corey, the church’s music director and pastoral minister. “Or you can come in and pick up the bag with your name on it and leave. We tried to make it as clean as possible.”

St. Patrick in Elkhorn is selling tables of eight for $200, including meals for all, two buckets of beer and “rental” for 90 minutes.

Julie Waggoner, a parishioner at St. Leo near 102nd and Blondo Streets, thought that was a great idea. She usually goes to several fish frys each year and was disappointed at the thought of skipping in 2021.

“It’ll be the closest thing to what we typically experience at a fish fry, not wall-to-wall but still in the presence of people,” she said. “I’m excited about that.”

Other safety steps are aimed squarely at volunteers. Masks and gloves are mandatory for volunteers everywhere, and each parish has its own protocol.

At St. Benedict the Moor in North Omaha, workers have cleaning supplies to scour each area they visit as they leave it, said Patricia Bass, the church’s office manager.

Even though St. Benedict serves both lunch and dinner, it needs only about six or seven volunteers, making social distancing easier. And, Bass said, they all know each other well.

Doing away with in-person dining has allowed Mary Our Queen to reduce its per-Friday staffing from 120 or more to about 30, said Vince Vigneri, grand knight of the Knights of Columbus, which handles the fish fry for the parish on 119th Street south of West Center Road.

“Everybody (volunteers) will be temperature-checked at the door and asked to fill out a questionnaire,” Vigneri said. “Anybody who fails will be sent home immediately.”

The Knights considered serving dine-in meals because the state and county would allow it but decided that would be too risky, he said.

Planners at several parishes said they’ve had several elderly and high-risk volunteers bow out this year.

Churches that decided to have drive-thru or takeout fish frys said the lack of money from side sales such as desserts, pickles and drinks would hurt but weren’t worth the safety concerns. They’re glad to be able to have an event at all.

But the loss of the dessert table is particularly sad for St. John in Fort Calhoun because it opened sales to community organizations such as the Presbyterian church youth group and post-prom party planners, Sandhoefner said. She wasn’t sure how they planned to recoup their loss.

“It has become, for us in our little town, a community event,” she said. “People are sad. They really are.”

At Holy Name, said fish fry volunteer James Goodman, there’s a plan to raise funds online to offset the fish fry loss. The fish frys have provided $650,000 for the parish over the last 40 years.

Though Omaha fish frys started as a way for Catholics to fulfill their meatless Friday obligation, they quickly became social events, places for neighbors to reconnect, former parishioners to meet old friends and co-workers to unwind after a long week, all with libations, of course.

This year, regulars say, they can’t do that in church halls for the most part, so they’re thinking of ways to safely gather elsewhere.

Pfannenstiel and his tour participants headed to Pauli’s, a sports lounge in Aksarben Village, after stopping at Holy Ghost on Friday night to pick up takeout.

“We are one of the few that serve shrimp, and I know our baked fish is very sought after,” she said, explaining that one year, when the church tried to change from cod to another fish because of supply problems, she got calls: “Do you have the good fish back?”

The tour guide expected Pauli’s — which doesn’t offer food — to sell plenty of beer to go with that fish and shrimp. A friend is one of the bar’s co-owners, and he said they could eat there.

Tour members have bought two tables at St. Patrick so far and will probably buy another, Pfannenstiel said. That takes care of the beer for March 12. He plans to find bars near the other takeout stops that will allow outside food.

Pfannenstiel thrives on the large crowds, but like most members of parishes where fish frys have been altered or canceled, he understands the reasons behind the changes.

He’s making the best of it, creating funny custom-made masks for tour participants.

With any luck, they’ll be tucked away as souvenirs in 2022.

This year’s Mardi Gras will be unusually sedate across the South.

Holy mackerel, it's Takeout Tuesday. Here's where to land some tasty seafood in Omaha

For a city that's far away from the ocean, Omaha has a fair amount of fish and seafood restaurants. Who doesn’t enjoy a plate of cod or catfish fresh from the fryer? Or a spicy seafood boil?

Omaha delivery co-op has 60 restaurants on board, but most aren't ready for orders yet

So far, the app has had more than 6,000 downloads. And about 60 restaurants are on board — far more than projected at this point.

More than ever, Easter is a new beginning for many in Omaha area this year

Omaha churches have in-person services, music and more. But this Easter, many are still not back to pre-pandemic worship.

Jeff Belling uses a leaf blower to clear snow outside Holy Ghost Catholic Church on Friday. "The pre-Lent one is kind of our test run to make sure we have everything ready to go," said church business manager Carrie Kaczmarek.

Michael Makara wheels bags of frozen fish while preparing for a fish fry at Holy Ghost Catholic Church on Friday. Like many others in the Omaha area, the event is takeout-only this year.

Volunteers like Makara come in a few hours before each fish fry at Holy Ghost Catholic Church. He's tossing bags into the fridge to prepare for Friday's fish fry.

Trays are placed on a table for people to serve themselves at a pre-Lenten fish fry at Holy Ghost Catholic Church on Friday.

Michael Makara wheels bags of frozen fish and shrimp while preparing for a pre-Lenten fish fry at Holy Ghost Catholic Church. Church business manager Carrie Kaczmarek said her church is one of a few that serve shrimp.