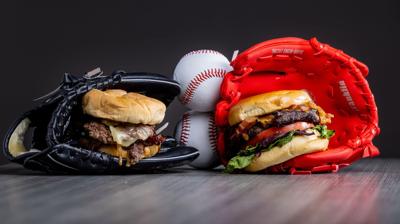 In the end, our latest search for Omaha’s Great Grub was as much about the trimmings as it was about the entrees.

We set out to find the best bacon cheeseburgers within walking distance of Charles Schwab Field, home of the College World Series for the next several days. We figured fans don’t spend every waking hour at the ballpark.

We found six burgers we would all eat again in a heartbeat.

But a few stood out. We had each had our reasons: The aioli. The caramelized onions. The barbecue sauce. The raisin jam. Even the fries.

And — considering the weather forecast — the air conditioning.

Our intrepid team featured two regulars — reporter and editor Kiley Cruse and I — plus a newbie, Andrew Popelka, a recent University of Nebraska-Lincoln graduate who works in marketing for the Omaha Storm Chasers. He’s had a burger or two over 22 years.

As usual, we discussed what we were looking for before we began. We wanted well-seasoned and juicy but not undercooked meat; fresh lettuce, tomatoes and onions on top; bacon that wasn’t limp but wasn’t so crisp that it deteriorated; and a balanced and interesting flavor profile (in other words, a burger with complementary ingredients).

We had two ultimate favorites: the Belgian Smash Burger at Block 16 near 16th and Farnam Streets, and the Nebraska Burger at the Jackson Street Tavern near 11th and Jackson Streets.

The sandwich sounds fairly out-there, but we all agreed those ingredients are the best of friends.

“The brown butter on the burger helps keep the juiciness throughout the sandwich,” Andrew said.

“The sum of all the parts worked together flawlessly,” Kiley said. “It wasn’t too messy to eat, but it didn’t skimp on topping flavors either.”

I was impressed with how perfectly it was cooked: slightly pink, but not at all underdone.

Chef Paul Urban, who owns Block 16 with his wife, chef Jessica Joyce, said the burger was inspired by his family, which is mostly Belgian and German.

“We grew up eating these raisin dumplings. You drown them in brown butter and brown sugar,” he said.

Once, when he ate them with Jessica, she had an interesting question: Why would you not eat bacon with that?

“So we put them all together and made the bacon burger,” Urban said. “It was a fun little trip down memory lane.”

He said raclette is the perfect cheese for the burger. Raclette is trending elsewhere in Omaha with the opening of a new cheesy sandwich restaurant, WD Racletterie in the Inner Rail Food Hall.

Everything on the burger except for the cheese is locally sourced or made in house, he said. That will only get better now that Urban and his wife have bought a farm across the river in Iowa. The day I talked to him, he was waiting for a “ginormous” greenhouse to be delivered.

Block 16 has daily specials and adds new menu items fairly frequently. He said the Belgian Smash Burger, priced at $9.95 with no sides, is here to stay because it has caught on with diners.

It consists of a blend of short rib, chuck and brisket, with bacon, cheddar cheese, caramelized onion, garlic aioli, spring mix lettuce and tomato on a brioche bun.

We all thought the caramelized onion and the spring mix elevated this over your average burger. The bacon was cooked nearly to perfection. The seasoning was excellent and it met our flavor profile requirements.

It also was the only restaurant that asked us how we wanted the burger cooked, something that made an impression on Kiley.

Owner Ross DiPrima said he carefully considered every element of the burger.

He tried 10 different kinds of meat before he was satisfied with the blend. He uses cheddar cheese instead of the American that’s found on many restaurant cheeseburgers. He visits his produce vendor every few days so he always has fresh toppings. The quality of the bacon is higher than the distributor recommended.

“We caramelized the onions ourselves,” he said. “I believe good ingredients make good food. I tell all my customers that I really do put my heart into this.”

Cheeseburgers usually are top sellers at restaurants, he said, so he wanted to offer one that had everything so diners didn’t have to pay extra for a lot of add-ons. He said he struggled with what to charge for the sandwich — $17 including fries — “but I finally felt like all the ingredients warranted a higher price.”

We agree, Ross. It was filling and delicious, even after Kiley and I split one. We had one quibble — I got a lot of the aioli and Kiley didn’t, and she found the spring mix a little overwhelming, so topping distribution could have been better.

At the Old Mattress Factory, at 501 S. 13th St. about two blocks from the ballpark, we tried the Maverick Burger for $15 including fries. It’s a half-pound patty topped with two slices of bacon and house-made barbecue sauce.

We loved the smoky flavor of the burger.

“The burger has an inviting smell that hits your nose the minute they put it on the table,” Andrew said. “It reminded me of being outside around a grill at a cookout.”

We loved the barbecue sauce even more. As near as we could figure, key ingredients were vinegar, brown sugar and chili powder, but it was amazing no matter what was in it.

“I can’t get over how many layers of flavor the barbecue sauce has,” Kiley said. “I highly recommend asking for an extra cup of sauce because it made everything it touched taste better, even the fries.”

I have to contradict Kiley. I’d order three extra cups.

The Smoked Gouda & Bacon Melt at the Omaha Tap House near 14th and Farnam Streets had a couple of twists: It came with a jalapeno cheddar beef patty and it was served on toast. It also had a smoky aioli and thick-cut bacon.

For $13.99 with your choice of hand-cut fries, soup or cucumber-onion salad, this burger was a contender.

We agreed that the bacon — two well-cooked slices — was outstanding.

“It had a sweetness that paired exceptionally well with the spice of the jalapeno,” Kiley said, though she also expressed a desire for a thicker slice of gouda.

Andrew was a fan of the sauce, but said it got lost when it mingled with the other toppings, causing the sandwich to be a bit dry.

“Ask for extra sauce and you won’t run into this issue,” he said.

I liked the fact that the toast wasn’t overly greasy like it is on some patty-melt style burgers.

We also visited Lula B’s Breakfast Brunch & Bar, a relatively new restaurant at 902 Dodge St., Suite 1, where we had the BBQ Burger, a half-pound patty with Jon’s natural bacon, cheddar cheese, zesty barbecue sauce, lettuce, tomato, onion and pickle. It was $13.79 including your choice of tots or fries.

The seasoning on the burger was among the best we had, as were the fresh veggies that could either be a garnish or placed inside the bun.

“This was the most flavorful tomato we tried,” Kiley said.

The bacon also had maple flavoring, my go-to whenever possible.

“It was by far the best bacon we had,” Andrew said.

They skimped a little on the sauce, however, and we thought the patty was a tad overcooked and, therefore, dry.

It was nice to have a choice of tater tots; I would always order them over fries.

We started our search at Burger IM, 225 N. 12th St., Suite 130 in the Capitol District. We thought the burger may be closer to mass-prepared, fast-food quality than what you’d find at a sit-down restaurant, but we were surprised.

We got the $9.88 Cowboy Burger, a one-third-pound patty with a fried onion ring, bacon and cheddar on top.

“The flavor of this burger well-exceeded my expectations,” given the appearance of the restaurant, where you order at the counter and can sit at only a handful of tables, Andrew said. “The crunchiness of the onion ring was one of the best bites of this entire search.”

I found it the closest to the ballpark’s bacon burger as any we tried (a good thing), though the barbecue sauce was added with an overzealous hand.

Kiley agreed, though she said their liberal use of cheddar was a good thing.

“This was a couple-napkin burger for sure,” she said.

As we usually do with each item we’ve searched for so far (previous Omaha’s Great Grub stories have featured breakfast burritos, chili, Caesar salad, margherita pizza and carrot cake), we agreed that we might not eat burgers for a while.

But if you’re looking for a burger outside the ballpark, you won’t strike out at any of these six places. There’s something to love at each one.

Omaha's Great Grub: Check out where to find tasty dishes in the metro area

Food news include a new venture for the Tired Texan crew, stroopwaffles and more.

Travis Barker is already back on stage against doctor’s orders 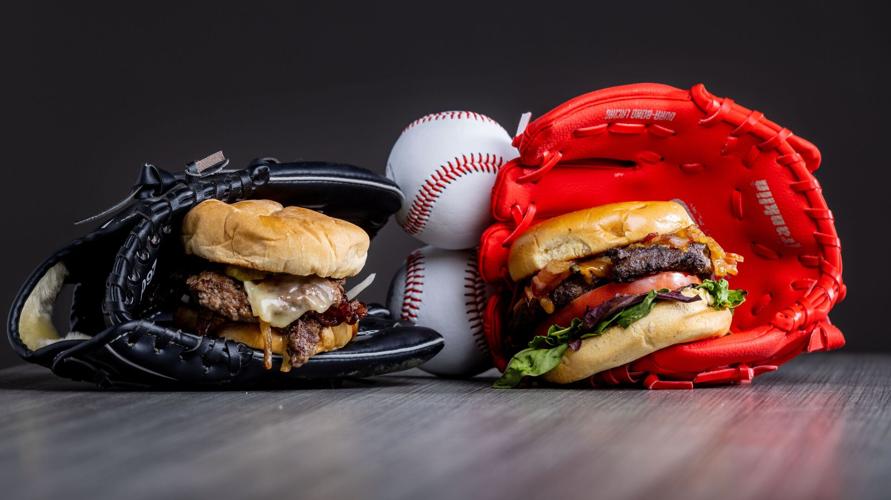 The hamburgers from Block 16, left, and Jackson Street Tavern on the right, photographed in the World-Herald studio on Friday. 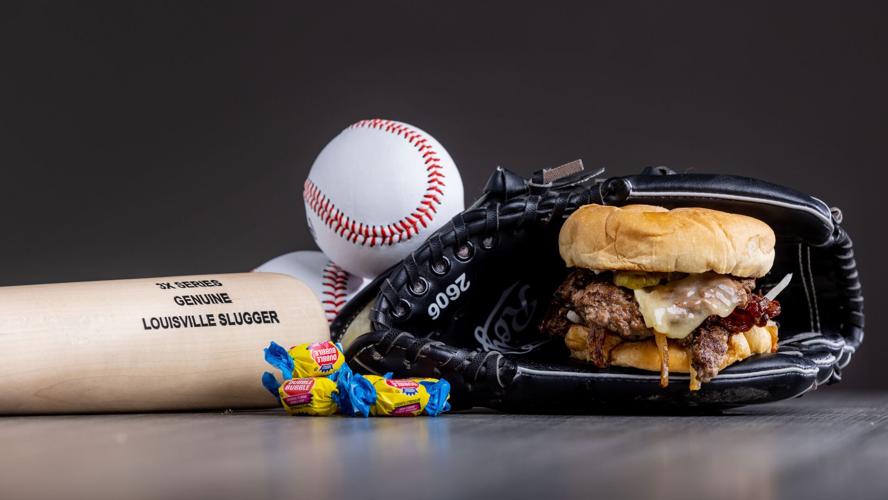 The hamburger from Block 16 photographed in the World-Herald studio on Friday. 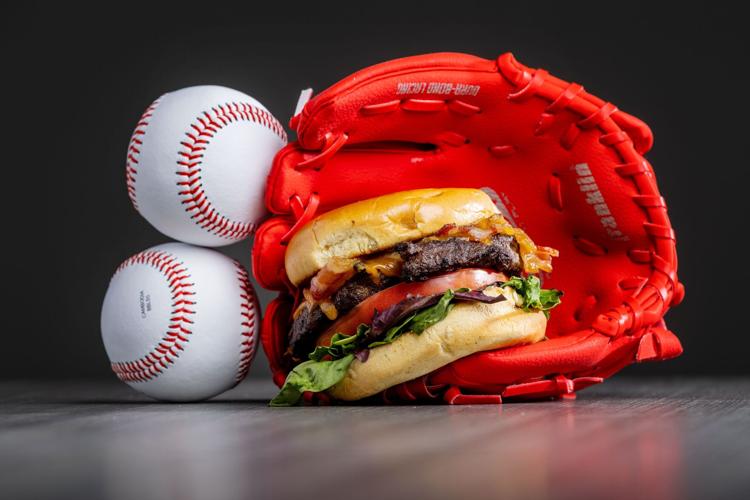 The hamburger from Jackson Street Tavern photographed in the World-Herald studio on Friday.