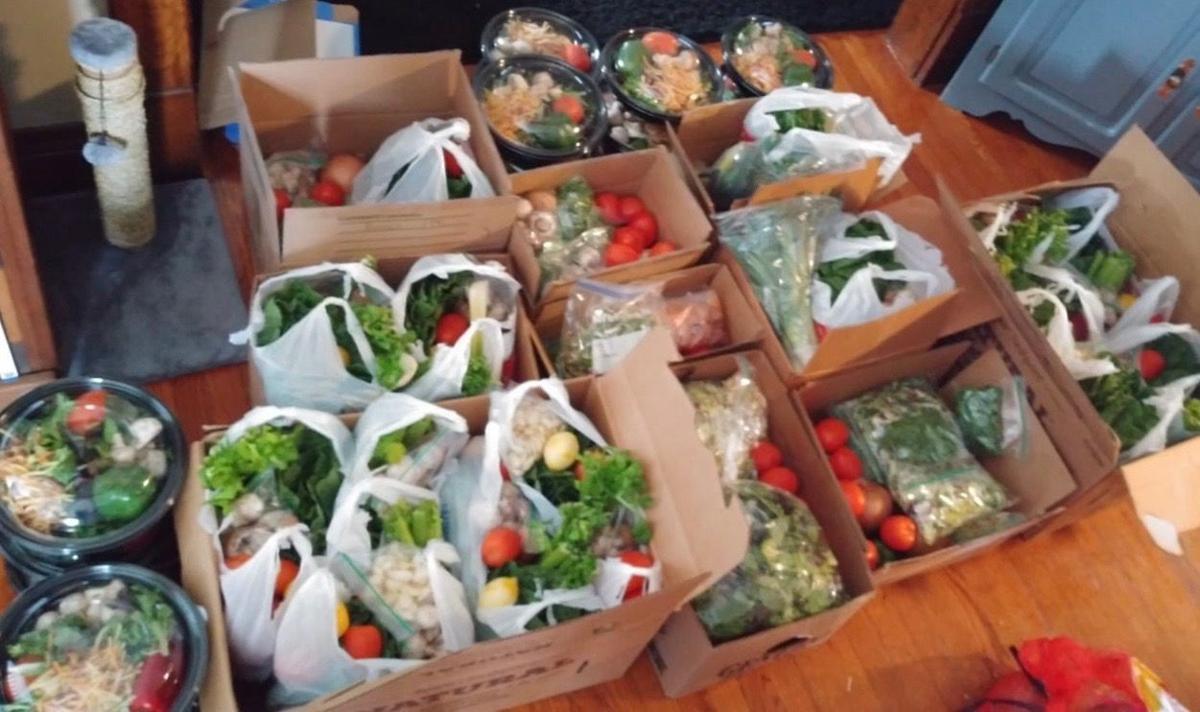 Members of the Nebraska Left Coalition packed bags of produce and other items from closed restaurants to distribute to struggling families and individuals. 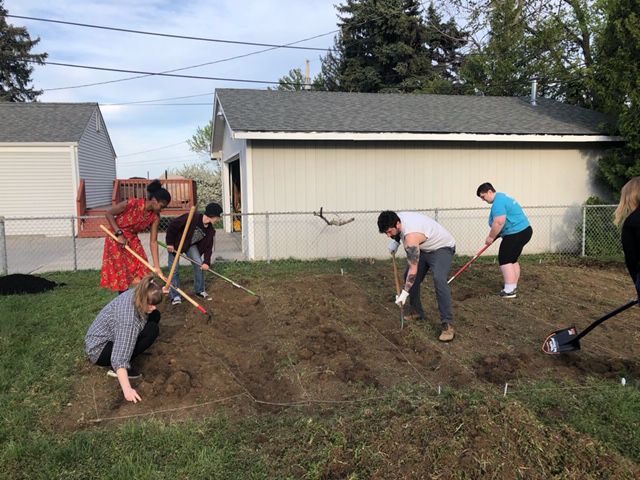 Members of the Nebraska Left Coalition work in their community garden.

An Omaha group that has been feeding low-income Omahans with a community garden recently seized an opportunity to feed even more.

Nebraska Left Coalition partnered with local chefs and others to prevent produce from going to waste as restaurants started closing temporarily in response to the coronavirus pandemic.

Members of the 3½-year-old group delivered between 75 and 100 bags of food to people who have lost jobs or are struggling in other ways.

Many of the people in the coalition are in the service industry, which has been hit hard by efforts to control the spread of COVID-19.

Nebraska Left Coalition just approved a plan to build a greenhouse and purchase additional seeds to help more people over the summer.

Omahan Cheri Peters was in bed with a stomach bug when a bag of restaurant food was delivered to her house. At age 58, she’s a full-time art student at the University of Nebraska at Omaha. She recently was laid off from her federal work-study job as an America Reads tutor for kids in kindergarten through eighth grade and has been digging into savings to stay afloat.

The box was overflowing with staples such as onions, lettuce, potatoes and carrots, a huge package of tortillas and fresh ingredients she rarely buys, such as dill, cilantro and fennel.

“They’re a little too pricey for me to (have) normally,” she said of the fresh herbs.

Anderson expected to do a few more food bags with the restaurants as they close down. The coalition soon will turn its attention to the garden, where members grow a wide variety of healthy vegetables. They preserve a fair amount of their bounty — pickled, jarred and frozen — for a year-round pantry. They also collect dues and raise money to supplement the veggies with store-bought groceries, if necessary.

The coalition also works with Tenants United to protect vulnerable people from eviction, something Anderson expects will ramp up in the days ahead.

Its work impressed and touched Peters, who had been hoping nothing would be thrown out when restaurants had to suddenly shut down.

“These people are all volunteers. They’re using their own gas,” she said. “I just think that’s pretty fabulous.”

Sinful Burger owners give back to community

The owners of Sinful Burger have reached out to help the residents of Bellevue.

Jim and Debbie Nearing, who operate the restaurant on Twin Creek Drive, gave free meals to kids last Wednesday in an effort to help struggling families and children who no longer are getting school lunches, reader Jenny Moraga said in an email to The World-Herald.

A Sinful Burger employee said about 70 kids were fed at no cost. They also gave local firefighters free food on Saturday and delivered free meals to nurses at the Bellevue Medical Center on Monday.

“These are amazing people with huge hearts,” Moraga said.

Five Omaha restaurants to give Takeout Tuesday a try

It's officially a thing in Nebraska! Takeout Tuesday was becoming a thing on social media. Now it's official, according to Gov. Pete Ricketts.

It will be at 40th and Harney Streets, general manager Andrew Miller said, and will include a 3,000-square-foot restaurant, rooftop seating, a beer garden and an event venue.

Want takeout? We're keeping an updated list of restaurants and their services.

No more eating in: How area restaurants turn to car service after Ricketts' coronavirus order

An updated list of restaurants, concerts and other entertainment affected by coronavirus

Many entertainment venues have closed, reduced hours or limited their services due to the coronavirus outbreak.

Review: Go to Rivera's for the entrees and appetizers, stay for the churros

The appetizers and entrees are wonderful. But a certain dessert is so dang good. Blissfully good. I-must-save-room-for-it good.

UNO grad is back in Nebraska after being stuck in Peru

The University of Nebraska at Omaha graduate, stuck in Peru because of the coronavirus pandemic, made it home to Lincoln on Tuesday after a 72-hour journey from the city of Arequipa.

Looking for a new adventure in your backyard? Many turn to gardening — and seed sales are surging

Seed sales are surging but supplies seem to be OK in the Omaha area.

A crucial part of the coronavirus fight: Getting info out to Nebraska's non-English speakers

Public health officials, faith and social service groups, and community leaders are trying to make sure the latest updates and recommendations about the coronavirus are reaching everyone, including the thousands of Nebraskans who speak a language other than English.

Nebraska Shakespeare said there wouldn't be enough time to build sets and have rehearsals for both plays even if the coronavirus outbreak ended soon.

Chabad House and the Jewish Federation of Omaha are delivering Passover kits to people in isolation.

There's lots of delicious Italian food and some other great stuff.

Families can feast on ham, beef, turkey and lamb for the holiday.

You're on the couch instead of in the pew. Here are some songs for the occasion.

Meatpacking workers are considered essential. But what happens when they get COVID-19?

Social distancing isn't easy at plants where employees often stand nearly shoulder to shoulder on the production line. And when the virus gets inside a facility, it can spread quickly, threatening workers and food operations.

SpaceX crew returned to Earth and other space news you missed

Members of the Nebraska Left Coalition packed bags of produce and other items from closed restaurants to distribute to struggling families and individuals.

Members of the Nebraska Left Coalition work in their community garden.