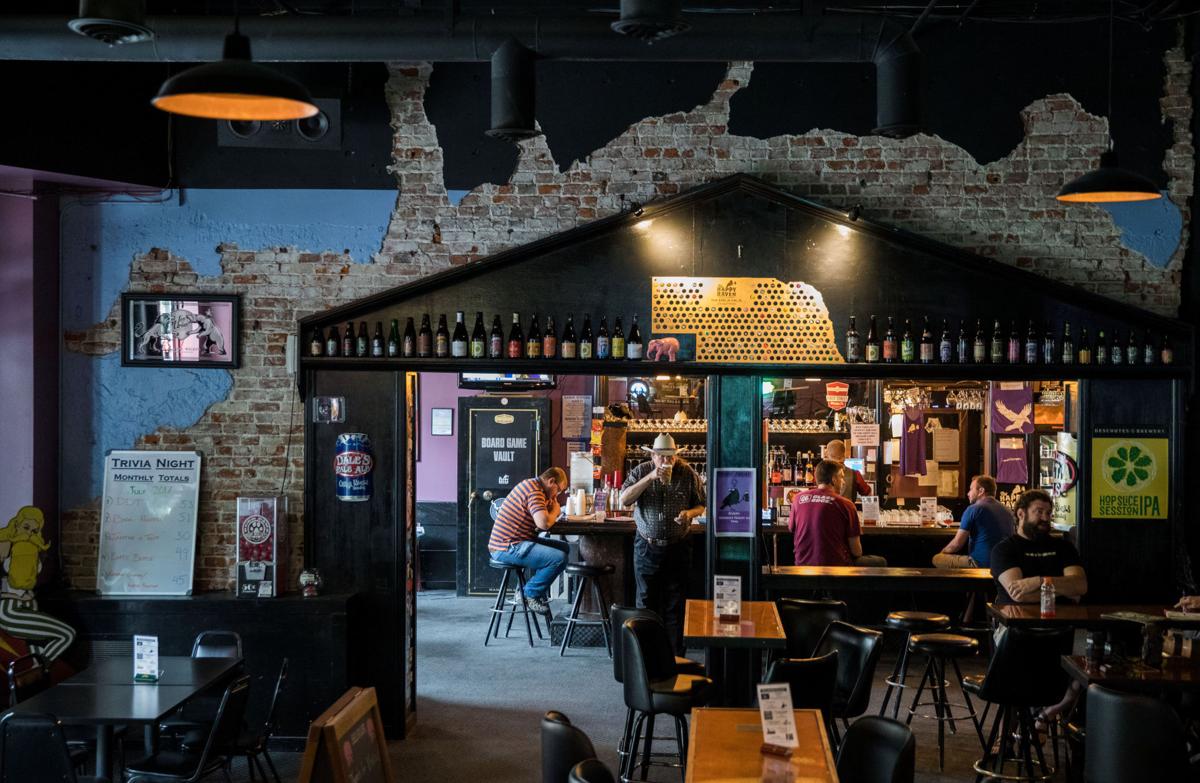 People drink craft beer at lunchtime at The Happy Raven in Lincoln earlier this month. 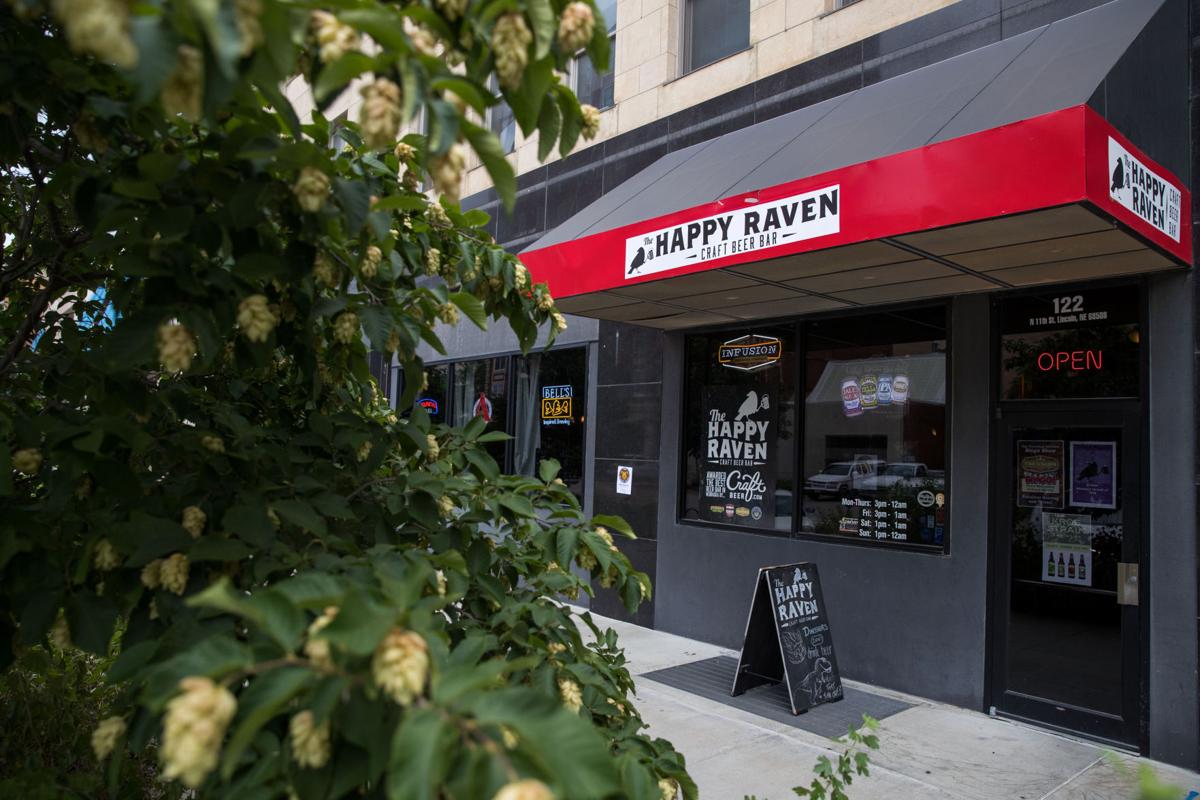 The Happy Raven in Lincoln. 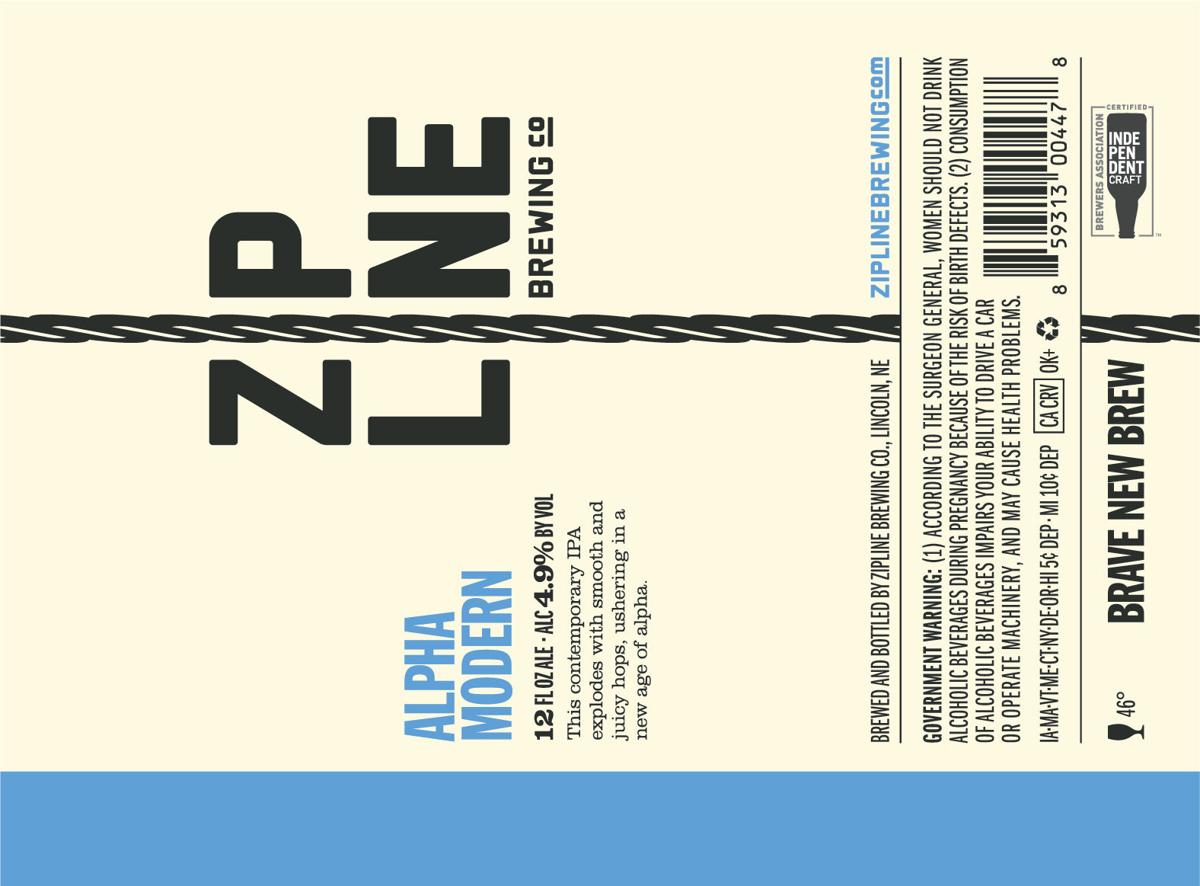 A Zipline label featuring the new "independent" seal developed by the Brewers Association. 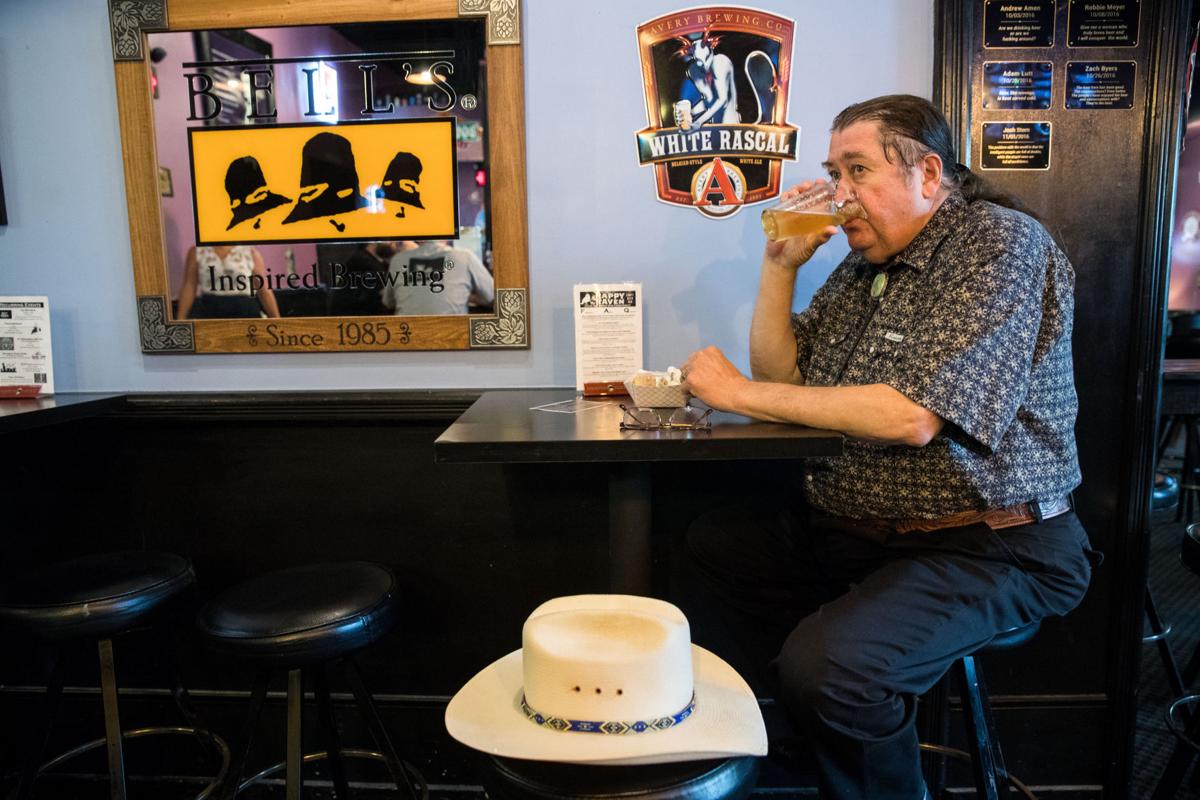 Danny Ladely of Lincoln, has a Kolsch beer by Zipline Brewing Co. at The Happy Raven in Lincoln earlier this month. 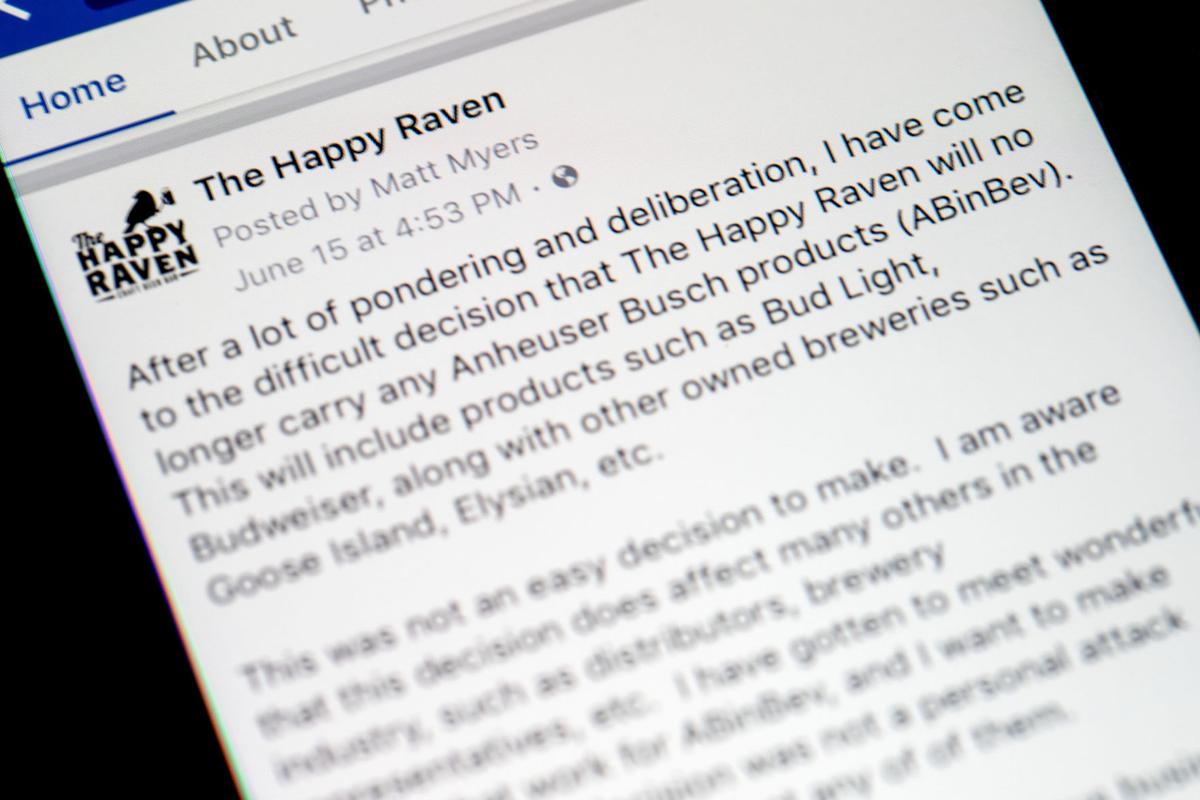 The Facebook post where Matt Myers, the owner of The Happy Raven, announced that his bar will no longer carry or sell any Anheuser-Busch products.

LINCOLN — On a display above a doorway in his bar, Matt Myers noticed a few bottles that needed to come down.

He enlisted the help of one of his regulars, a tall guy, who reached up and pulled Goose Island beer bottles from a decorative lineup of other brews. Goose Island, Myers said, no longer has a place at his bar. Same goes for Budweiser and Bud Light.

Last month, Myers, owner of Lincoln’s The Happy Raven, decided that his bar will no longer carry or sell any Anheuser-Busch products.

For Myers, it comes down to a question of transparency: Anheuser-Busch, he said, purchases successful craft breweries and hopes consumers don’t realize it, blurring the lines between independent craft beer and the brands owned by the megabrewer.

But Myers’ decision illustrates an ongoing conflict between big beer and those in the craft camp. Now, some craft breweries in Nebraska and around the country are pushing harder to distinguish themselves from the craft names owned by the megabrewers, adding a new seal to their beer labels marking the product as “independent craft.”

“It actually is a hot topic right now,” said Tom Wilmoth, president of the Nebraska Craft Brewers Guild and co-founder of Lincoln’s Zipline Brewing Co. The big brewery acquisitions, he said, have “created some concern on the part of small independent brewers — that are not under that flagship corporation — that there would be market confusion.”

In May, Anheuser-Busch announced that it had acquired North Carolina-based Wicked Weed Brewing, rolling it into a stable of craft and import brands the company calls its “High End.” The group includes names such as Chicago’s Goose Island Brewery, Seattle’s Elysian Brewing Co. and Colorado’s Breckenridge Brewery.

And far from hiding its affiliation with these brands, she said, the company has “made ... vocal announcements in both local communities and nationally whenever we have formed a new craft partnership. These announcements have resulted in hundreds of media articles with broad reach across the country.”

But the acquisitions have resulted in slower growth for the craft beer business, according to the Boulder, Colorado-based Brewers Association, a nonprofit craft brewing trade organization. Once a brewery is acquired by a major beer maker, the association no longer counts its output toward that of the overall craft beer market.

This summer, the association adopted a seal, meant to be added to members’ product labels, certifying the beer inside as “independent craft.” To meet the association’s definition of a craft brewer, a brewery must use traditional ingredients, must produce 6 million barrels or fewer per year and must have less than 25 percent ownership by a member of the alcohol industry that is not a craft brewer.

The new seal, according to the Brewers Association, aims to “elevate small and independent craft breweries” as they enter the next phase of the market. On Tuesday, a counter on the association’s website reported that more than 1,500 brewing companies had adopted the seal.

“Not only do craft brewers have passion on their side,” the Brewers Association said, “but their core customers clearly desire more transparency in the market.”

Zipline plans to roll out labels featuring the seal in the near future, Wilmoth said.

Bill Baburek, owner of Omaha-based Infusion Brewing Co., said his brewery also plans to incorporate the seal onto its packaging over the next year.

“We feel like being independent and only local are two of the biggest marketing tools behind our product,” Baburek said.

Watching the big companies take over smaller craft breweries can be disheartening, he said.

“If you sell to one of the big guys, the independents will have to fight even harder for a tap handle or shelf space in a liquor store,” he said. “It makes it tough.”

So the seal, he said, is an important step for smaller craft breweries.

The seal, according to the Brewers Association, isn’t meant to imply the beer inside is “good” while the big brewers’ beer is “bad.”

It is simply meant to be a signal to the beer buyers that their money is going back into the local community, Wilmoth said.

“You know who’s brewing the beer and where they’re buying their ingredients. There’s no mystery to it,” he said.

And if you ask Myers of The Happy Raven, that’s the way Nebraskans like it.

He wasn’t worried when he made the decision to quit selling Anheuser-Busch products, he said. As a craft beer bar, the standard domestics — Bud Light and Budweiser — made up a small percentage of The Happy Raven’s overall sales.

Myers said he doesn’t expect to hear many complaints until football season, when Husker fans on their way to Memorial Stadium might stop in to order the familiar fare.

“We have enough options to where people can still try many different things, and we can steer them in a direction to something they like,” he said.

Myers hasn’t heard of other bars in Omaha or Lincoln following his lead. That was never his intention anyway, he said.

All Myers hopes to do, he said, is get people thinking about where their beer is coming from.

Besides, he said, there’s a lot out there to try.

Your phone buzzes with a text from an old friend.

Robber’s Cave: From 1860s brewery to hideout to hangout and back again

People drink craft beer at lunchtime at The Happy Raven in Lincoln earlier this month.

The Happy Raven in Lincoln.

A Zipline label featuring the new "independent" seal developed by the Brewers Association.

Danny Ladely of Lincoln, has a Kolsch beer by Zipline Brewing Co. at The Happy Raven in Lincoln earlier this month.

The Facebook post where Matt Myers, the owner of The Happy Raven, announced that his bar will no longer carry or sell any Anheuser-Busch products. 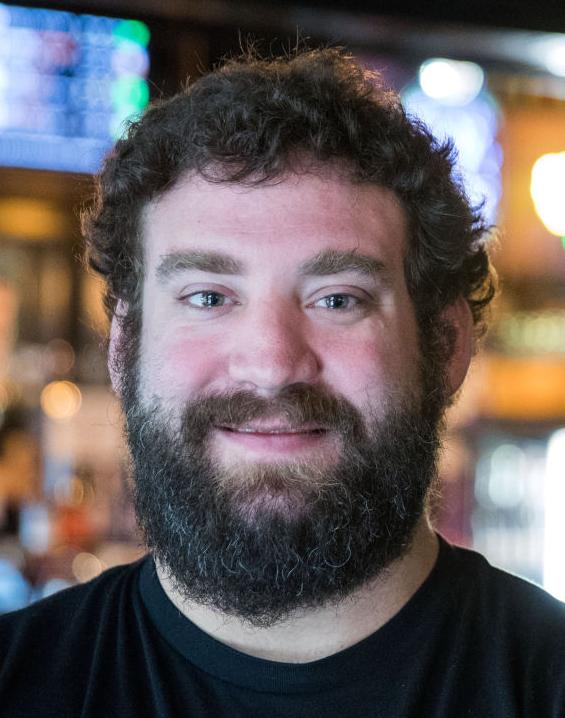