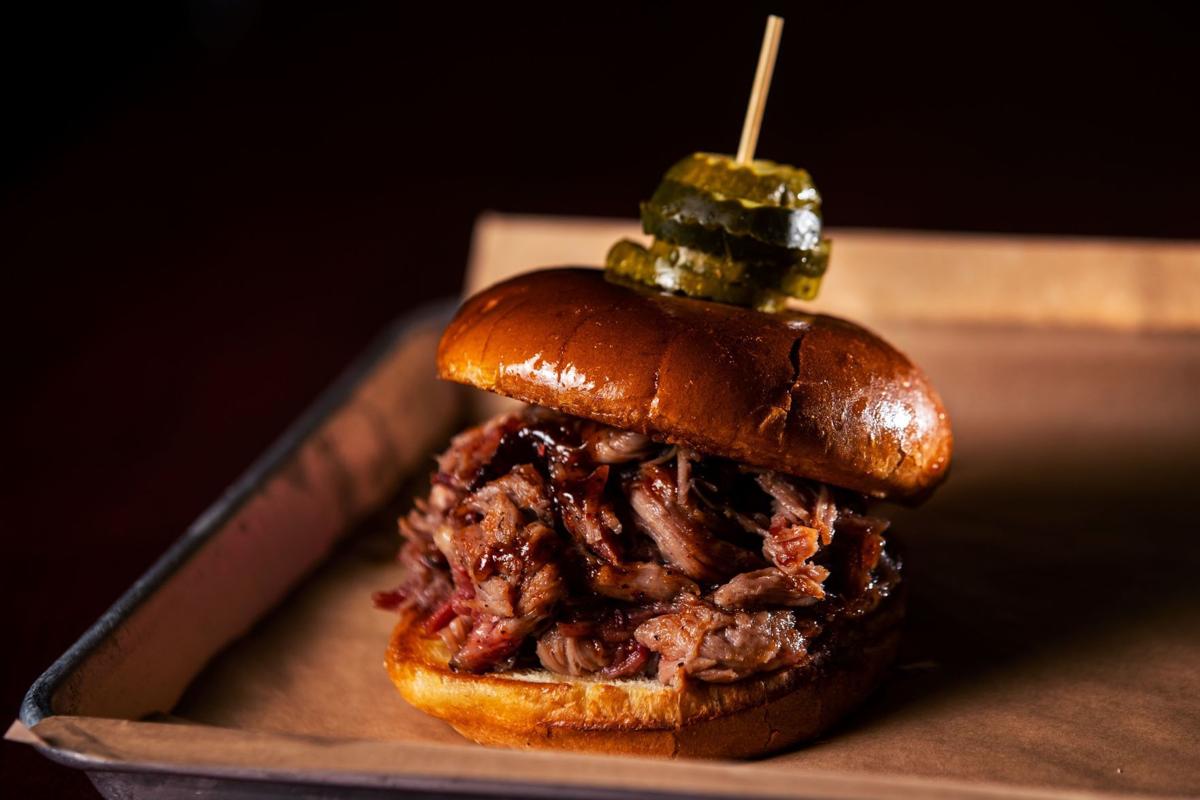 The pulled pork sandwich from Porky Butts BBQ. The restaurant, located at 15475 Ruggles Street in northwest Omaha, opened in August 2019. 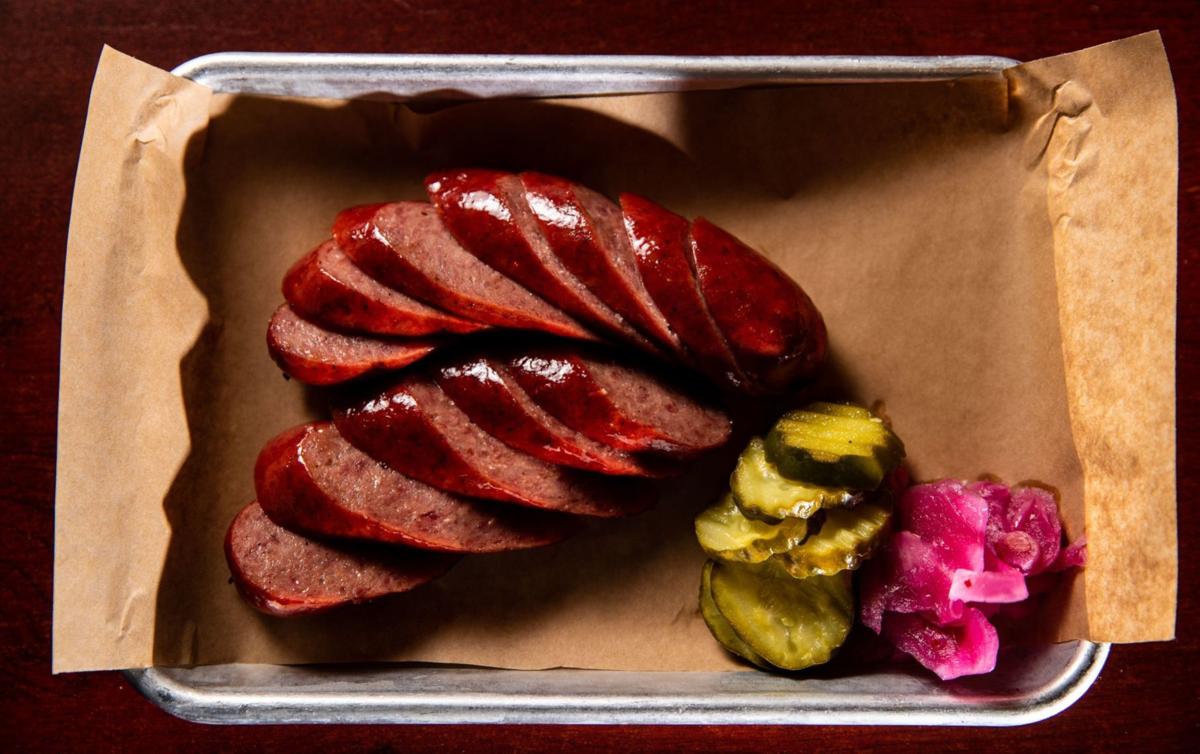 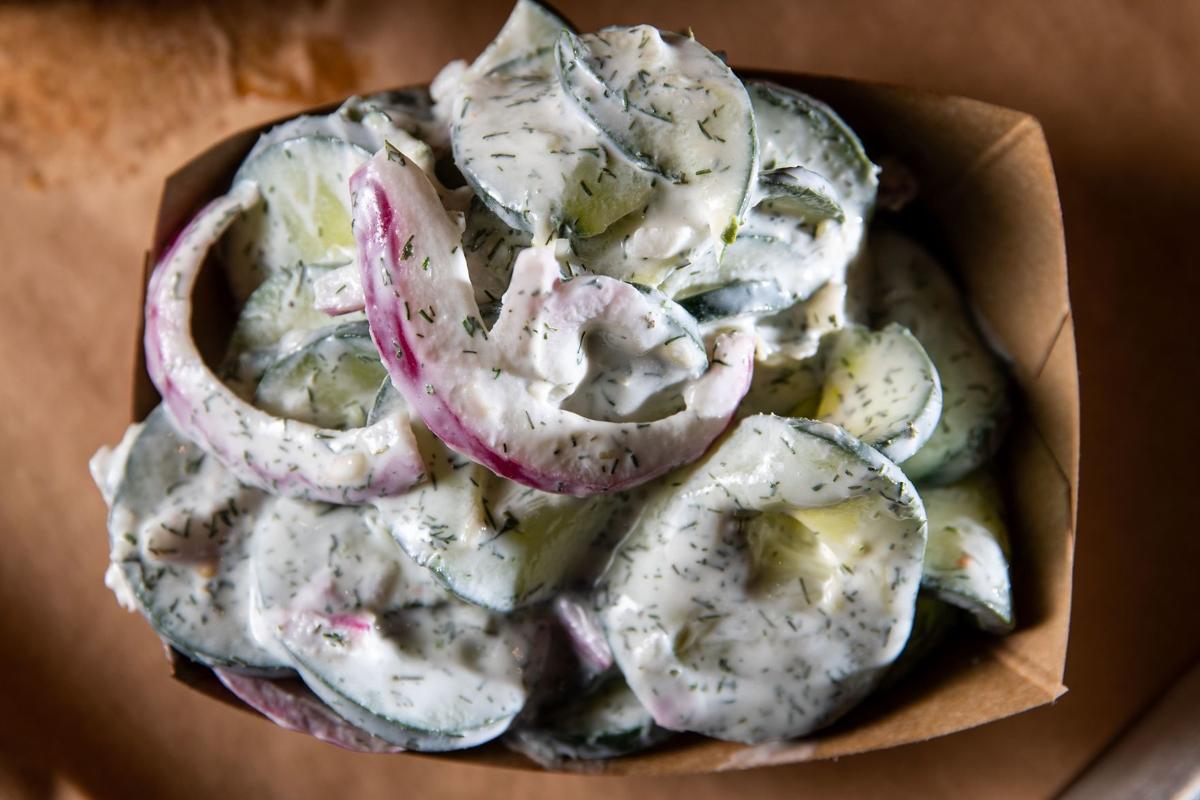 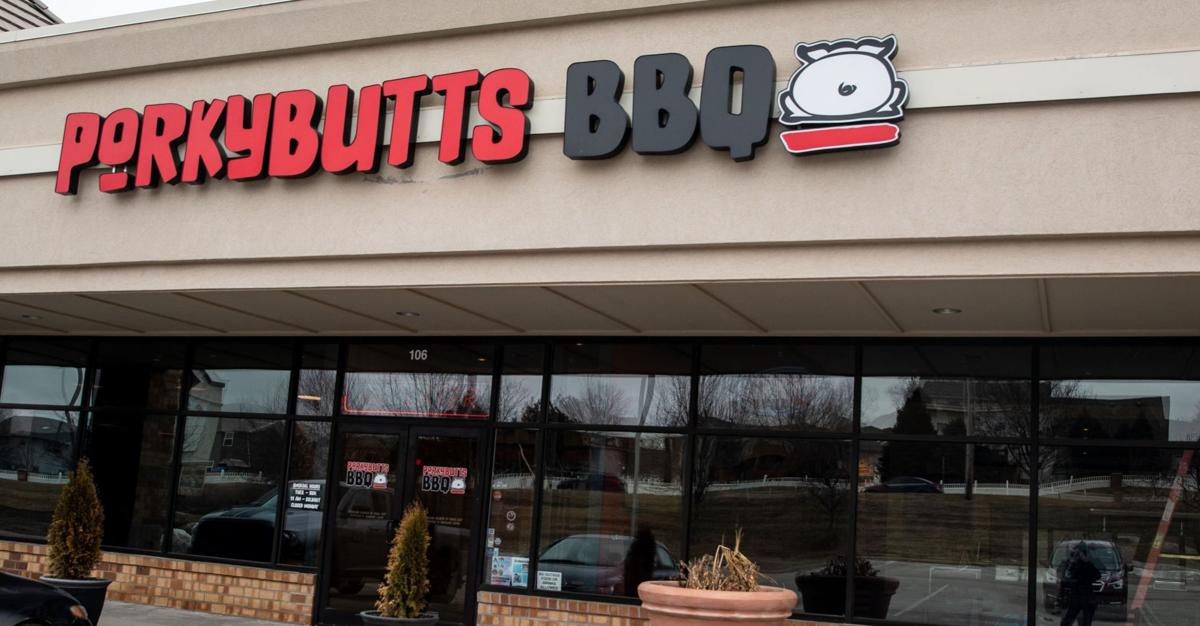 We had to try it.

The northwest Omaha restaurant, open since August 2019, is in a nondescript strip mall with a parking lot that’s difficult to navigate.

On two recent visits, we found much on its menu to make the confusing entry and trip down construction-plagued 156th Street worthwhile.

At Porky Butts, the meat is the star. The restaurant has an impressive display of trophies, ribbons and other prizes from barbecue competitions, including first-place honors from the American Royal World Series of Barbecue in Kansas City — arguably the world’s largest smoked meat festival.

You order at the counter to dine in or carry out, aided by a staff that’s unusually attentive and congenial for a fast-casual eatery.

When I called in an order, the worker asked a few questions and then offered ideas about what I might like. When I dined in for lunch (with my trusty pal Kindle), I watched a friendly server strike up a lively conversation with a couple in a nearby booth, then tell them she was looking forward to seeing them again.

It was a bit like being at a backyard cookout.

We ordered a couple of two-meat plates and appetizers to eat at home on a Saturday night. It was about 8 p.m., and the restaurant already was out of brisket and jalapeño-cheese smoked sausage. I was disappointed but intrigued — maybe that meant they were worth waiting for.

My husband had burnt ends (his forever choice, if they’re available) and breaded catfish, with apple slaw and fries. He loved the ends — charred black on the outside and super-tender on the inside. He said they competed for the best he’s had in Omaha. The potatoes also were a hit; they had a nice, crisp finish and appeared to be coated with crumbs or batter before they were fried.

The catfish was just OK, he said, though it redeemed itself in a sandwich the next day.

I had pulled pork and regular smoked sausage, with cucumber salad and cheesy corn.

The pulled pork was moist, smoky and delicious, save for a couple of small clumps that were end-of-the-day crusty. Totally understandable, but if I were dishing it up, I’d try to weed out the hard bits.

The smoked sausage took me by surprise. I didn’t expect it to be the best thing I ordered. It was charred dark, tasted like it spent ample time in the pit and popped perfectly when I cut it and released its juices.

Porky Butts offers three sauces. Mild has a tomato base and molasses, said Blane Hunter, the restaurant’s owner and pit master. A middle sauce starts with the mild and adds more heat, and the third sauce is extra fiery. We tried the first two, and they were smooth and tangy — a great complement to the meat.

Sides were good, but a couple of tweaks would have made them better.

Hunter said the cucumber salad was inspired by one he ate growing up in Texas and one his wife had in Wisconsin. He pickles the cucumbers and onions in vinegar and sweetener, then drains the liquid and adds sour cream and dill.

It was a little too sour for my taste, so I added a bit of stevia. My husband said the apple slaw could have used more apples and a smidge of sweetness.

The cheesy corn (basically corn in a cream cheese sauce with poblanos) needed a little salt and more kick. Even with the peppers, it was bland.

I tried the brisket and the jalapeño-cheese sausage at lunch, this time with mac and cheese and green beans. Once again, the meat reigned, especially the brisket. It was perfectly black on the sides and fork-tender in the middle, with the smoky flavor you expect from prize-winning barbecue and nearly devoid of fat. I didn’t like the sausage as much as its plain cousin; for me, the cheese seemed superfluous.

The mac and cheese was piping hot with a satisfying, Velveeta-like sauce. The green beans were flash-frozen and tasted exactly like fresh, cooked to a perfect soft crunch. All they needed was salt. Sometimes, simple is best.

Porky Butts has a diverse list of appetizers, including black-eyed pea dip and sweet-and-sour fried pickles.

As former residents of Cajun country, we had BBQ boudin balls: smoked pork, cheese, rice and spices rolled in crumbs and deep-fried. They were wonderful, even though they weren’t 100% authentic; Louisiana boudin balls feature boudin sausage. We also had fried okra, which was tasty and exactly like fried okra everywhere, served with good old ranch dip.

Prices are moderate — the most expensive item on the menu is the three-meat plate at $15.99, and most are considerably less.

The restaurant’s website said Hunter is a graduate of the Johnson and Wales and Fox Valley Technical College culinary programs and has 27 years of experience. He grew up helping his dad fuel a passion for pit barbecuing. His bio includes 85 Top 10 finishes in barbecue competitions and 22 grand championships in nine states.

He said he decided in 2019 “to follow his dream and bring the world of championship BBQ to the people of his adopted hometown.”

And what about the name? I called Hunter to ask.

A friend started the Porky Butts team for barbecue competitions and asked Hunter to join. When he decided to take his passion more seriously than the friend, Hunter took over the name, with the friend’s blessing.

The name gets noticed — customers regularly joke about it, Hunter said.

People love taking pictures with the sign, especially shots featuring their backsides. That happened frequently at gas stations when he was driving his truck with the Porky Butts logo to competitions.

Nearly all were women, he said.

Hours: Tuesday through Sunday, 11 a.m. to sold out; closed Monday

The restaurant served its last meals in late January. The owners say they are seeking a new location and plan to reopen.

Pasta Amore in Rockbrook Village is celebrating Carnevale this year. The Omaha restaurant's festivities will include the crowning of a king and queen, and a large meal.

After more than a year, J's on Jackson reopens with new owner and menu

J's has been extensively remodeled, said general manager Samantha Howell. The kitchens, bathrooms and floors all were redone. The front of the bar also was remodeled and new bar equipment is in place.

Dedicated foodies in Omaha would say this about the Saddle Creek Breakfast Club: The food is delicious, but good luck getting a table, especia…

The new downtown bakery specializes in one thing and does it well.

Fans will find lots of familiar faces and spaces at the steakhouse, now open after rebuilding from fire damage.

What's the best jarred salsa for your next party? Ranking the 14 top brands

There are some decent options out there. But overall, we were left with a not-so-burning question: WHERE’S THE HEAT?

Is the new Mountain Dew Zero Sugar as good as the original? We tried it

Mountain Dew Zero Sugar is here, and it’s being marketed with the tagline “As good as the original.”

Modern Love’s Pineapple Coconut Cream Pie is featured on a new national top 10 list from People for the Ethical Treatment of Animals.

City of Omaha Parks Director Brook Bench described the ramps as homemade and said that whoever installed them bolted them to a tennis court at the park, damaging the court in the process. The ramps are dangerous, not up to code and are a liability for the city, Bench said.

The ice cream from Coneflower Creamery has lots of fans, including a kid from Louisiana.

Bogie’s is a cute little sports bar that sits just a tad northwest of the last great American mall, Westroads — a strangely fun bar destination in its own right

The list of nominees will be narrowed to the finalists on March 25. The awards will be handed out May 4 in Chicago.

Saltgrass Steak House serves steaks that are char-grilled on an open flame and seasoned with garlic butter and its special seven-spice blend. The restaurant also makes beer bread and desserts in-house every morning.

Wednesday was last day for Mars Bar and Grill

Mars Bar and Grill opened in March 2017 as part of the Growler USA franchise, which had about 30 locations across the country, according to an announcement on Facebook.

Dandelion Pop-Up is returning to its former home at 13th and Howard Streets next month, and founder Nick Bartholomew already has an impressive list of chefs who have agreed to participate, including an up-and-coming chef from Chicago.

Final day for last Ragazzi's Pizza location is this weekend

At one time, there were three Ragazzi's in Omaha. The pizzeria launched in a Ralston strip mall in 2012, added a second location near 156th Street and West Maple Road in 2013 and expanded to 168th Street in 2016.

Review: In 'Once' at Omaha Community Playhouse, actors are the orchestra, too

There’s nothing flashy or overly theatrical about the musical “Once,” which premiered Friday at the Omaha Community Playhouse. It has a fairly small cast of people who do it all: sing, dance, recite lines and act as the orchestra. And the story, about two musicians who connect on a Dublin street and fall in love, is quiet, spare and downright intimate.

The restaurant's phone has been disconnected, and it's no longer listed among the locations on Granite City's website.

Gandolfo's to open downtown location, even if it's just for pick-up

They plan to open soon even if they're only available for takeout and delivery.

No positive cases have been reported, said owner Blane Hunter.

The pulled pork sandwich from Porky Butts BBQ. The restaurant, located at 15475 Ruggles Street in northwest Omaha, opened in August 2019. 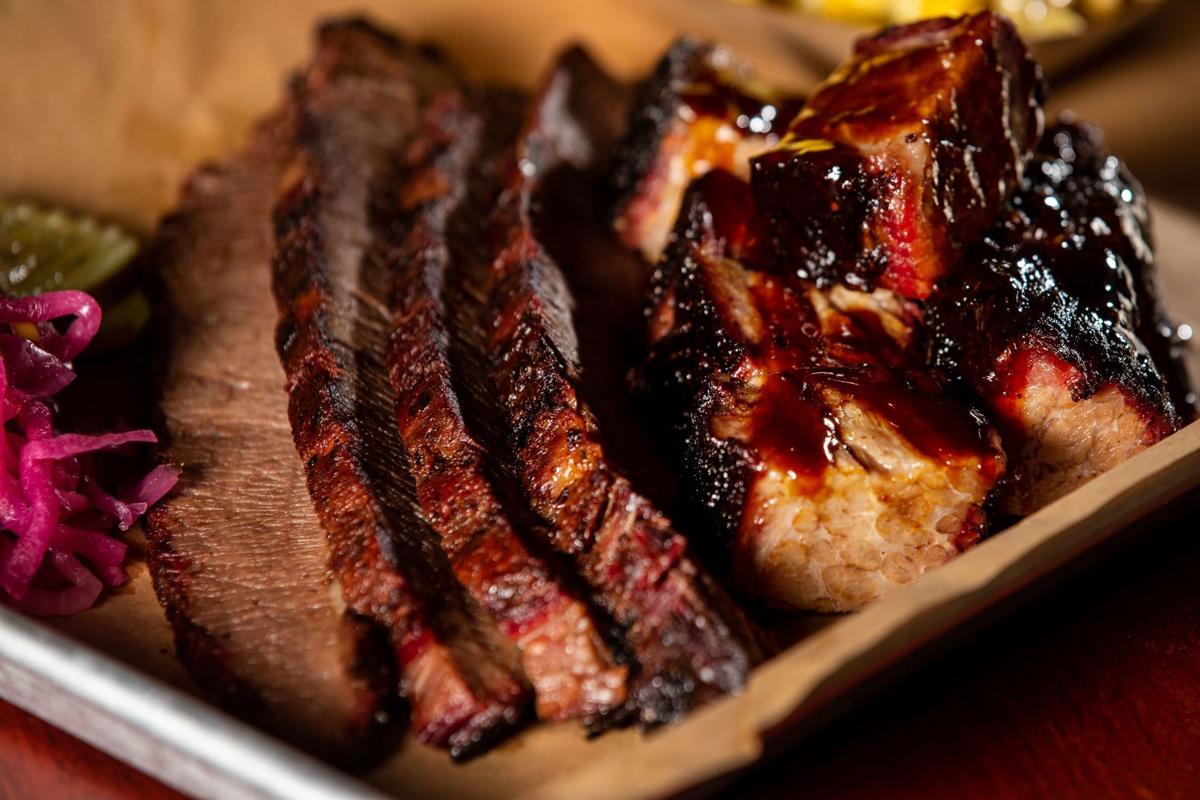 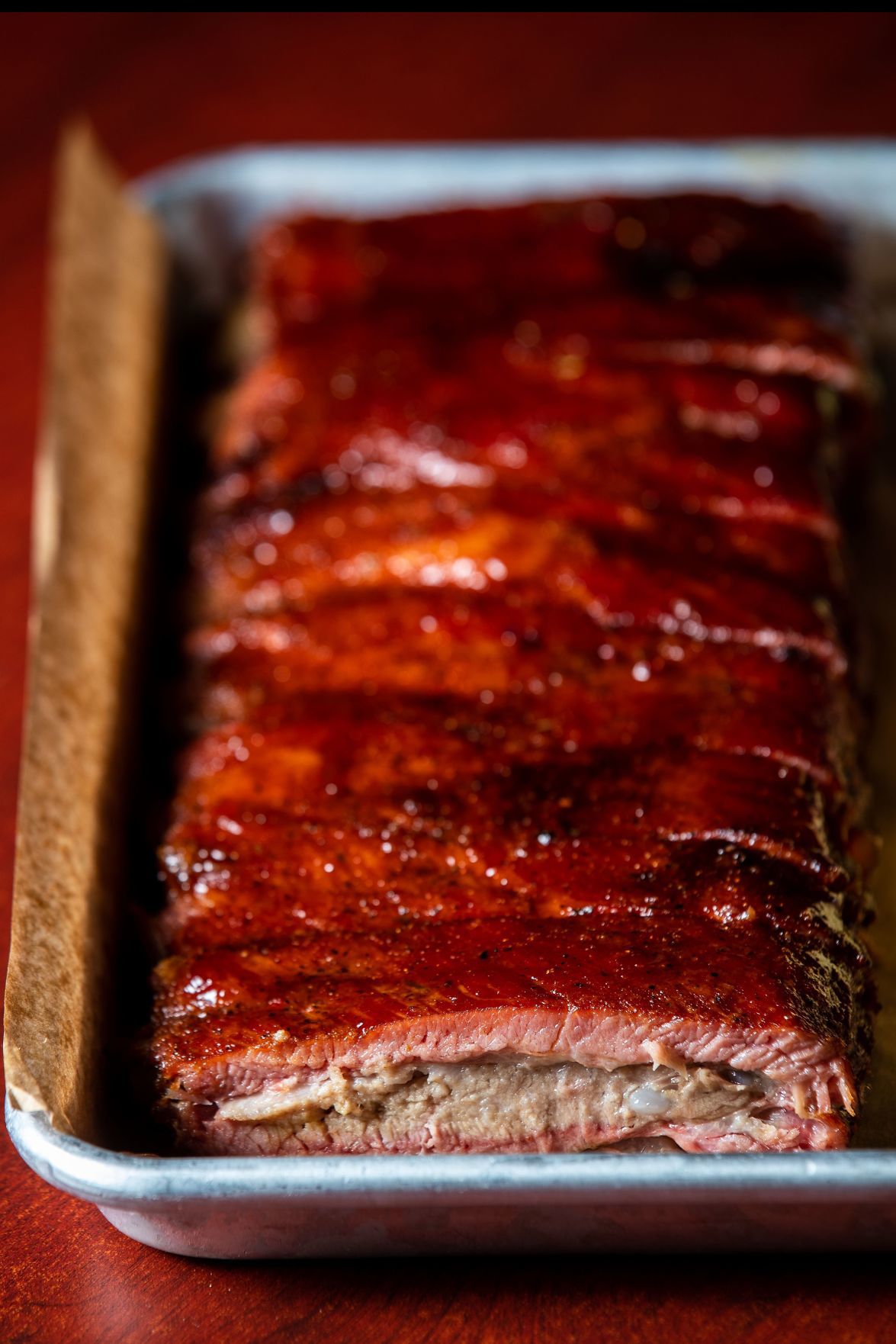 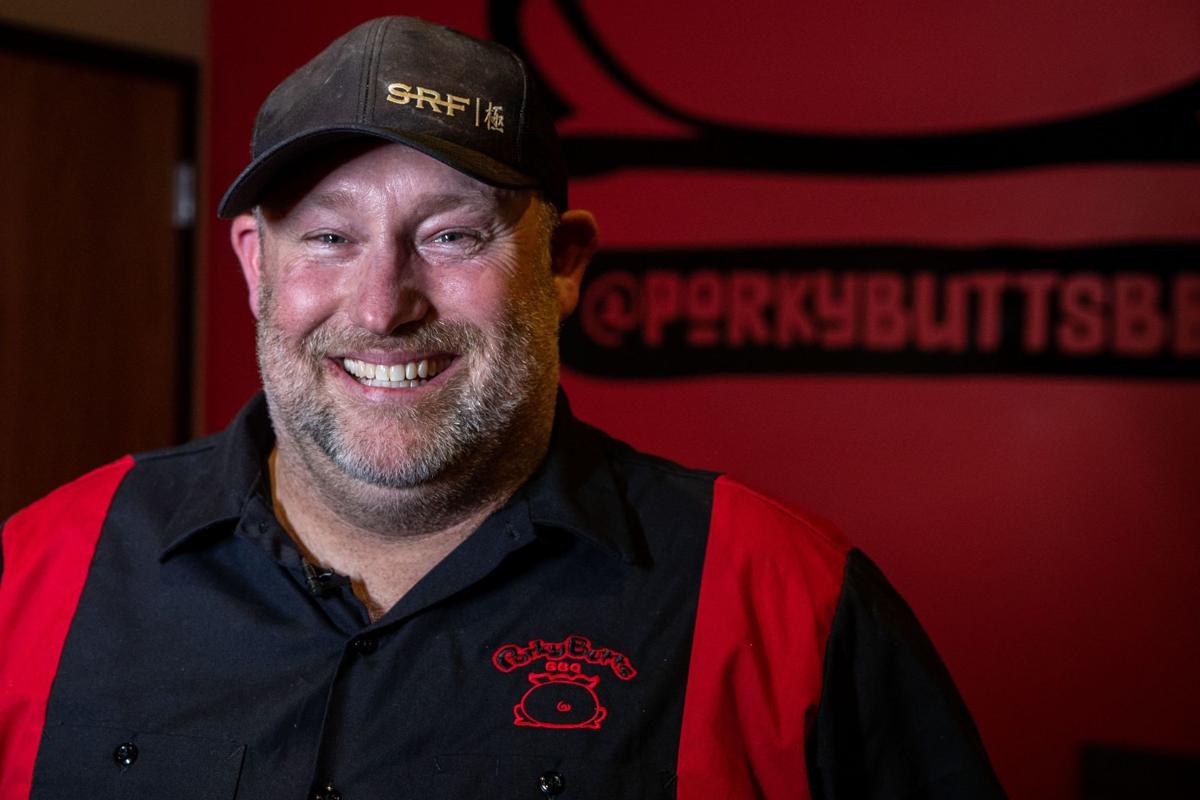